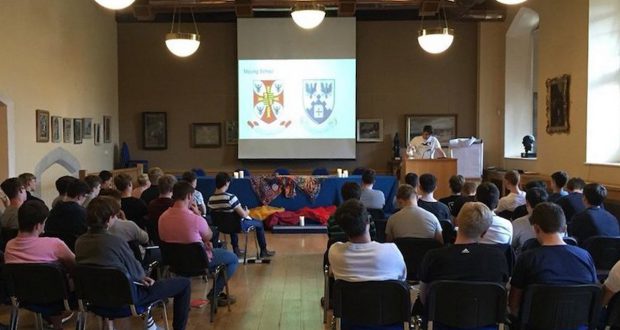 The meaning and mystery of Kairos

Declan O’Keeffe, Head of Communications at Clongowes Wood College, reports on a recent Kairos retreat for fifth year students. Led by students of sixth year, the retreat enabled the students to see the value of their Christian faith as lived and experienced in a community.

Living the fourth, pleading the fifth…

The 20th Annual Clongowes Kairos Retreat for Poetry (fifth year) boys commenced in St. Patrick’s College, Maynooth and concluded in the College Chapel in Clongowes four days later. The Kairos Retreat is a three and a half day programme, which offers a challenge to continue it for as long as one possibly can afterwards. It assumes a follow-up programme (Fourth Day), which strives to keep it alive indefinitely, as well as providing a supportive community for the retreatants.

The beautiful setting and relaxed atmosphere of Maynooth allowed these young men to delve deeper into their own lives, through prayer and reflection. Time together encourages genuine unity and group cohesiveness to develop, as a result of which young people listen and begin to respect the opinions of others without judgement.

The purpose of the Kairos Retreat is to allow the students to see the value of their Christian faith as lived and experienced in a community. With the support of that community, the retreatants can more easily look within themselves to find their true worth as a people and reflect on their relationships with others and – ultimately – with God.

Over 80 Poetry students and their Rhetoric (sixth year) leaders engaged in this worthwhile experience of Christian community this year, with a series of talks delivered by the Rhetoric leaders and adults. Prayer and the sacraments are an essential part, as are the retreatants’ involvement in discussions and various exercises.

What I had heard about Kairos was what little there was to be said about Kairos. It was a retreat, undertaken by 5th years that lasted three and a half days. That was all that I knew. That – and that it consistently ranked amongst the top things ever done by a student in Clongowes. When this mystery wrapped in an enigma was offered to me, I leapt at the chance, eager to unravel the secret behind this most covert of retreats. (Fifth Year Retreatant – Clongowes)

Kairos comes from one of two Greek words for time: ‘Chronos’ and ‘Kairos’. ‘Chronos’ refers to chronological/sequential time, whereas ‘Kairos’ signifies a moment of indeterminate time in which something special happens, and has been adapted in more recent times to mean ‘God’s time’. It is a peer ministry model common to Jesuit secondary schools, and the challenge posed is the continuing and living of what one learns and experiences during this time. The Kairos Retreat is based in part on the First Principle and Foundation of the Spiritual Exercises of St Ignatius of Loyola.

In Clongowes, Rhetoric students, lead the retreat with a series of talks, group discussions and prayer. Peers, sharing their personal history and theology, are complemented by the adult retreat team, while other staff members also contribute with their own personal journeys. The Rector, Fr Michael Sheil, S.J., celebrates the Liturgy every day with the Eucharist and Sacrament of Reconciliation and a service of Light and Healing.

The time I spent in Kairos met and surpassed my expectations of what a retreat can offer. I learned more about myself and others than I ever thought I would, and looked at faith in an entirely new light. Of course, I’m not going to use this opportunity to expose the details of the retreat. This is partly due to maintaining the air of confidentiality surrounding the whole affair, but also because it is a highly unique and individual experience. (Fifth Year Retreatant – Clongowes)

The talks during Kairos are centered on the revelation of God’s love in our lives, through all the persons and experiences of our days. In accepting God’s love and life, we have the responsibility for service in the Lord’s name. During the days of Kairos, there is a growing self-awareness through the boys’ engagement with the speakers and their interaction with one another in small groups. This is facilitated by their leaders and by their own desire to participate in prayer and the sacraments.

Listening is fundamental to the process of Kairos and the retreat helps people to integrate their experiences with their cognitive development. In Kairos, there is a genuine desire to understand one another; to accept one another more easily; to share their values and to build up a trusting relationship with people they may not have known very well.

My Kairos wasn’t the same as anyone else’s Kairos – and nor should it have been – because everyone is different. I do know, however, that everyone got an indescribable amount from it, and the lessons that I learned from it are some that I hope to carry with me for the rest of my life. I urge my younger colleagues to be patient, to be open, and to sign up for Kairos when it is offered. You won’t regret it – I promise. (Fifth Year Retreatant – Clongowes)

And so – as the retreatants return to chronological/sequential time – we pray that they will see the value of their faith lived out through community with the support of the team, their peers and the adults and that they will be able to fulfill their mission on this earth to the best of their abilities.

Declan O’Keeffe is Head of Communications at Clongowes Wood College, where he also teaches History and edits The Clongownian and Clongowes Life.