‘To live this mission in our broken world’ 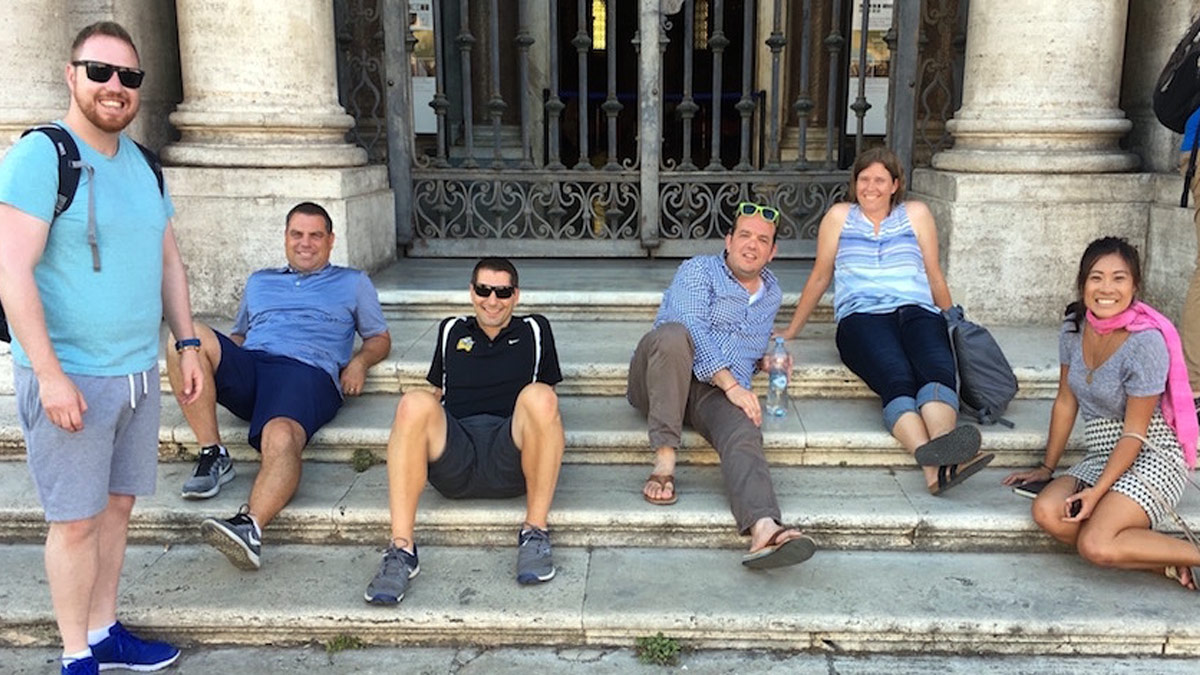 In July of this year, Declan O’Keeffe, Head of Communications at Clongowes Wood College along with five other teachers from Jesuit schools in Ireland and fourteen from our counterparts in the United States, took part in an Immersion Course offered by the Institute for Advanced Jesuit Studies in Boston College. The in-depth course comprised a one-week road trip across the north of Spain from Madrid to Barcelona and a second week in Rome. The first week saw the group visiting many of the locations associated with the early Jesuits and ‘the pilgrim’ Ignatius – from Arevalo to Manresa by way of key sites such as Pamplona, Loyola and Montserrat. The next seven days based in Rome focused on the foundation, consolidation and subsequent spread of the Society and the lives of the young Jesuits who ‘set the world on fire’. Since his return, Declan has been reflecting on the experience…

We had encountered the young man on the ninth day of the Camino de Santiago last June – outside the town of Nájera – when he pointed out a church embedded into the cliff in an area of troglodyte dwellings. Then, as we crested the last hill before Burgos three days later, we saw him standing before a large wooden cross at the foot of which we pilgrims each placed the stone we had carried to the spot. Unexpectedly he began to sing acapella a religious song in French – it sounded like Gregorian chant – and we were enthralled. The simplicity of the gesture, the fragility of the sound and the willingness to profess his faith aloud and in public enchanted us in equal measure.

The unashamed, unabashed gesture of the young man heartened us and smacked of the early days of the life of the ‘converted’ Ignatius, when he must have stuck out a bit as the disheveled preacher until he realized that his lifestyle was injurious both to his health and the development of the nascent society. The Catholic Church is getting quite a bashing these days – in Ireland as elsewhere – and to be a card carrying Catholic is almost to be a rebel. The recent visit of Pope Francis to Ireland was also heartening in this time of turmoil – arguably the most serious crisis in the Church since the Protestant Reformation [1].

On May 20th 1521 Ignatius of Loyola was badly injured at the Battle of Pamplona by a cannonball, an event that led to his convalescence and conversion from the caduca to the aeterna – from the temporal to the spiritual – and a desire to dedicate the rest of his life and works Ad Maiorem Dei Gloriam. A few months earlier, in Germany, there was another bombshell in history when Martin Luther was excommunicated at the Diet of Worms, an event that kick started the Reformation and significantly altered the course of church and world history. The reactions of the two men to their respective trials are instructive. Both were concerned to better the Church but each of them went about it in a different way: Luther confronted it head on while Ignatius strove to change it from within, as a ‘quiet, contagious influence’ [2].

It is significant that the followers of Martin Luther called themselves Lutherans after their founder, while the companions (not followers) of Ignatius were not dubbed Ignatians. Ignatius and his companions initially called themselves the Company of Jesus: Amigos en El Señor or ‘Friends in the Lord’. So, Ignatius was a company man. All was for the Greater Glory of God and he was careful to deflect all credit from himself. He was the great organizer and spent the last sixteen years of his life, not following his own plan to be a pilgrim, but God’s plan to establish a sturdy robust organisation that would survive him and his successors.

Ignatius was also born into a (western) world in crisis with Christianity in disarray. Church and state were inextricably entwined. The Protestant Reformation did not disentangle the twain – that was the gift of the French Revolution – it merely realigned the church/state alliances along political lines. However, the Reformation’s bedfellows, the Renaissance and Age of Exploration, ensured that Christianity in all its forms spread around the world over the next two and a half centuries as did the Jesuits until the suppression of the Society in 1773 (another crisis and another renaissance).

Speaking recently in Dublin, Dr Alan Roxburgh observed that it is time for Christians to re-trench, reflect and re-emerge to re-engage in smaller communities. Extolling the virtues of the parish, he suggested that – in the post-modern decline of capitalism and the fracturing of western society – the way forward lies in scaling down and re-forming communities. Although he did not make an explicit reference to E.F. Schumacher’s thesis that small is beautiful [3], it did not require a great leap to get there. Schumacher’s critique emerged from the oil crisis of the seventies and the emergence of globalization with the mantra that bigger is better.

The Society of Jesus (and indeed the Catholic Church) has moved on since the days of its foundation. We can still find God in all things but we may have to look harder these days. The Ignatian Legacy may be found in the sites and the churches and the archives that we visited in Spain and Rome last July – but that’s not where we labour day-to-day. There are few Jesuits working at the chalk-face any more, which is where we come in. This band of brothers and sisters. This company of pilgrims – taking the mission forward and bringing it all back home.

The dwindling resources of Jesuit manpower in the west focus the mind wonderfully on the alternative methods of continuing to propagate the mission, especially in our schools and we are keen to continue and deepen our involvement in this. And so it is reassuring to hear again that ‘Jesuits… find [their] identity not alone but in companionship: in companionship with the Lord, who calls’ but also ‘in companionship with others who share this call.’ [4]

Hardened pilgrims will tell you that the Camino always provides, and this has happened so often to us that we may no longer dismiss it as coincidence. Accordingly, the injunction of the first Jesuit priest and theologian, Peter Faber, that ‘if anything untoward does befall us, we should take it as coming not from man but from God’ [5] rings very true. Erstwhile Superior General of the Society, Fr Pedro Arrupe echoed this at the key Jesuit shrine of La Storta when he wrote that he ‘had planned things differently; but it is God who disposes, and his designs are a mystery’. [6]

And so, in the wake of our twin peregrinations across Spain and into Rome in the footsteps of ‘the pilgrim’ we are excited, enthusiastic and only too willing to roll up our sleeves and get stuck in as the new academic year rolls around. We are inspired by the call to arms ‘To live this mission in our broken world’ and look forward to being part of a ‘fraternal and joyful [community] in which [to] nourish and express with great intensity the sole passion that can unify our differences and bring to life our creativity.’ [7]

At the end of the Immersion Course we were tasked with reflecting on the legacy of St Ignatius following his death in 1556 and we distilled it thus: