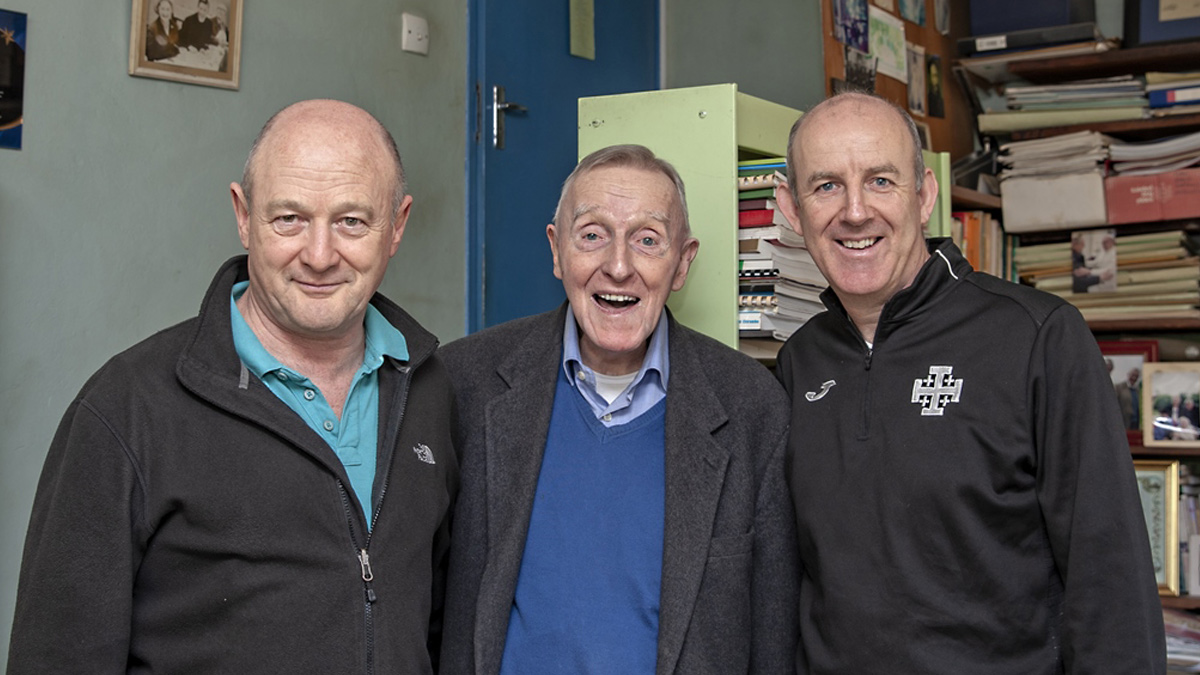 PADRAIG SWAN :: I feel a sense of privilege to have met Michael Kelly SJ on many occasions when I visited Zambia and to have had a friendship with him, even from a distance. It was one of Michael’s great gifts, especially in his later years of life, that he would spend hours in his room on the ground floor of Luwisha House writing to his many friends across the world. I am honoured to be one of them.

That room overlooked the large garden where he also spent many hours tending to fruit and vegetables. He was a man connected with the earth, physically and metaphorically. He was up to speed with events around the world because of his letters and emails. My last e-mail exchange with him on Dec 24th last illustrates how up to speed he was with events in Ireland. He wrote, “I hope and pray that all of you are well and that you have not been touched by this new strain of COVID which seems to be sweeping across Ireland. But it sounds as if the UK and EU have reached a Brexit agreement – hopefully this will also be of benefit to Ireland and will not worsen an already delicate situation.”

He knew how to connect with the reality of the other – a great gift of consciousness and empathy. I heard it said in the many tributes paid to him since his death that even in a crowded room where his attention could be drawn away, he made you feel as if it was only you and him there. He had that beautiful gift of presence, and in that you knew you were in the presence of a saintly man.

When I stayed in Luwisha House I would get up at 6am to attend Michael’s daily Mass. He was a man of deep faith. He had you hanging onto his every word during his homilies, spoken with the soft broad accent of a Midlands Tullamore man which never left him. We share that Midlands heritage, and that too was another reason to unite us. His faith was, and still is, a real inspiration to me. He walked with Christ every day – the kind that you could see was nourished and deepened by the Spiritual Exercises and a daily relationship with Christ. We talked about his relationship with God and how that relationship guided his life and did so right up to the end. On my last visit in June 2019, he said to me that after 90 years God must have some plan for him that he was still around. He was ready to meet God and was not afraid of death. I took great comfort from that conversation when I learned about his death – God had called him home and Michael was indeed ready.

That faith and trust of a life’s mission to God inspires me and how I am called to live my own life. I am always amazed at the spirit and zeal of missionaries, that spirit and zeal which leaves behind a life in one’s homeland to create a new life in a new homeland. For Michael Zambia became that home for over 50 years, so much so that he became a Zambian citizen, and chose to be buried in a graveyard in Kasisi just outside Lusaka with countless more Irish Jesuit missionaries. As I have done on other occasions, I will visit his grave there one day too, please God. His mission in life was always to love and serve God in whatever new environment he found himself. It’s the same zeal and spirit that motivated the likes of St Francis Xavier who left Europe for the Far East never to return home, and he too maintained a link with Ignatius and his friends via letter writing, although it took months or even years for a letter to reach its recipient in the 15th century. Thankfully e-mail has improved that.

Michael’s views on women is another deep memory he leaves me with. When he spoke either in conversation or while saying Mass, he had a very intentional way of speaking about women and including them first. He always said, ‘women and men’ in that order, not ‘men and women’. That subtlety had a strong message within it. He firmly believed that women are under-represented and not fairly treated in society, and especially in the Church. In my conversations with him, and as shared in other public interviews, he called for women to be given their rightful place in the Church, including ordination, and he even said, ‘Why not the first woman Pope?’, whom he even named Pope Theresa.

Michael received many accolades in his life for his work in education and on HIV/AIDS. These never went to his head, although he was deeply proud of them. He had many plaques and statues of such accolades in the halls and rooms of Luwisha House. However, it was his gentleness and humility that stand out for me. His simplicity is also striking. I have shared many breakfasts with him, and he made a small bowl of enchima (maize porridge) every morning and, along with his mass and prayer, that was his daily sustenance. If you didn’t know who he was, you would never know that this humble man was a such a giant in his chosen field and vocation. He certainly lived life to the full and has left a legacy that inspires so many, including me. I am a better person for having met this humble giant. AMDG

Photo: Michael in the centre, Kevin Reynolds of RTE on the left, and myself on the right (June 2019)