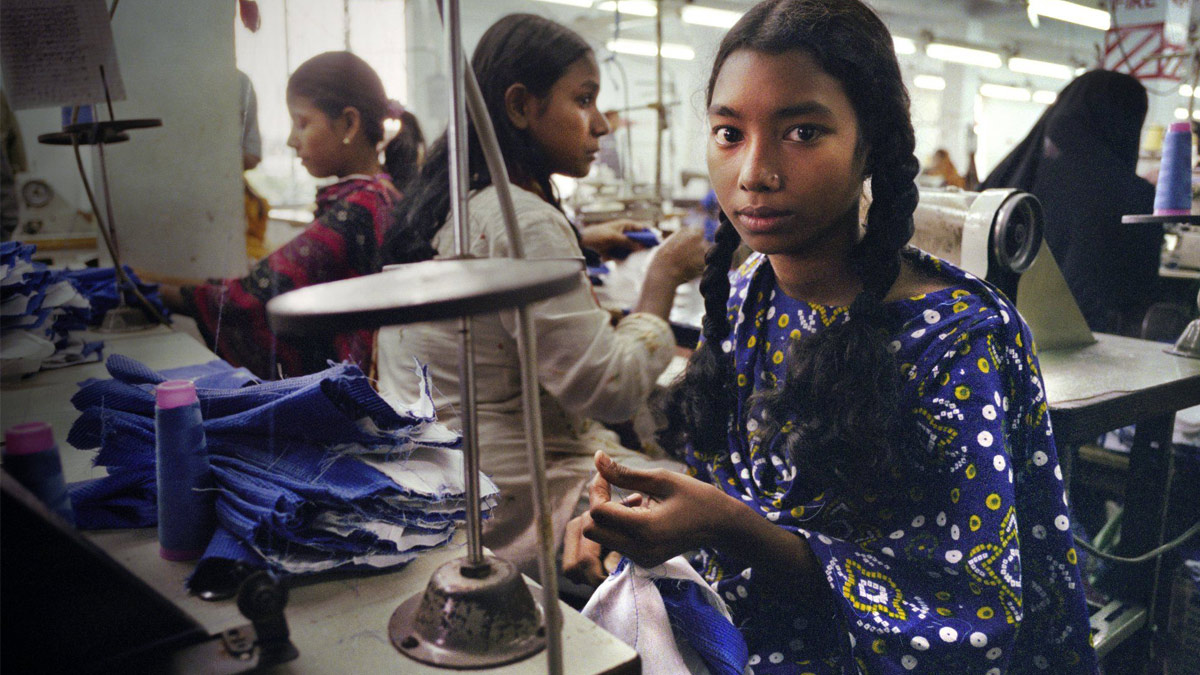 This blogpost is by Lanah Acton, fifth year student of Coláiste Iognáid in Galway.

Growing up in the age of excessive consumerism, materialism and destructive capitalist economies, ‘fast fashion’ is a term we hear more and more of each day. Fast fashion is inexpensive clothing, produced rapidly by mass-market retailers in response to the latest trends. Although convenient and budget-friendly, this industry has drastic and negative implications. My question is, to what extent do we register what our purchases essentially fund?

The ideology of capitalism, spawning from the industrial revolution of the 18th century when goods, for the first time, could be manufactured in great quantities at lower prices, has been magnified to an even larger scale thanks to the tool of social media. Anyone who uses platforms such as Instagram and YouTube knows how saturated they are with fashion and lifestyle bloggers known as ‘influencers’. Many of these self-made celebrities directly promote and encourage the consumption of these low-quality, synthetic products, with ‘micro-seasons’ changing and updating themselves almost 52 times a year. Fast fashion corporations such as PrettyLittleThing and Missguided cannot thrive without employing those with a social media following to advertise their products through endorsement.

So where’s the problem in this? Keeping up with growing demand and producing mass amounts of textile product at such a low price is only possible with the exploitation of sweatshop workers. It is estimated that 168 million children between the ages of 5 to 14 have no other option but to work in these harmful conditions.

Sweatshops are mainly found in Asia, in Bangladesh and Pakistan for example, where families work in appalling conditions and must spend the majority of their paltry pay cheque on food for their families to survive. Children are exploited and abused and women are sexually harassed on a daily basis, due to extremely poor regulation and zero union protection. The average employee, working relentlessly for 16+ hours a day without sufficient toilet breaks, would earn less than the typical western consumer would pay for a morning coffee. Contrary to the opinion of some, sweatshops do not alleviate poverty, but only sustain it.

On April 24, 2013, the Rana Plaza factory building collapsed in Bangladesh, killing more than 1,100 workers and injuring 2,500 others, most of them women. This was a result of structural defects as the building had not been designed to hold heavy machinery for garment factories, a fact ignored by the Bangladesh government and factory owners during planning. This is an example of the ruthless capitalism and lack of local government oversight supported by our seemingly innocent purchases.

Bono once said, “every age has its massive moral blind spots”. I believe our age is particularly blind; some of the greatest injustices are disguised and hidden from us, as well as enabling us to turn a blind eye. For example, I recently came across a social media post by a company that epitomises fast fashion. The post read: “empowered women empower women”.

The fast-fashion corporations that profit directly from exploiting women, violating their basic human rights, and denying them sufficient working conditions certainly do not empower women and it is gross hypocrisy if they claim that they do.

Females, making up 85 to 90% of sweatshop workers, are in some cases forced to take birth control and routine pregnancy tests so that their employers can avoid the provision of maternity leave and appropriate health benefits. The deception of these shallow posts is almost laughable. Hypocritical social media posts like these are merely a marketing tool.

In terms of environmentalism and sustainability, the industry is destroying our planet at exponential rates. According to the Institute of Sustainable Communication, headquartered in New York, the clothing industry is the second-highest polluter of clean water. Fast fashion accounts for 10% of all humanity s carbon emissions, producing more than all international flights and shipping combined. When it comes to textile production, we treat our resources as if they are infinite. For example, it takes 2,000 gallons of water just to grow the cotton for one pair of jeans. This puts immense pressure on cotton farmers to keep up with hugely unrealistic demands, fuelled by unnecessary consumption from the developed world. The global cotton industry uses more pesticides than any other crop in the world.

Fast fashion clothing often consists of nylon, a synthetic material that leaks microplastics into the water with every wash, adding further to the environmental burden. The dye behind any garment adds to the water footprint of production, creating poisonous fumes, where workers have no choice but to inhale life-threatening gases. The world consumes 80 billion pieces of clothing each year. Unwanted and discarded after two wears, immense piles of garment waste builds up in landfill. Poor countries have contributed the least to the climate crisis and yet are suffering the most, from the extreme cyclones in Mozambique and record heatwaves in India to the exacerbated drought in East Africa. There are endless environmental devastations connected to fast fashion.

So what can you actually do as an individual? I believe that we, as consumers, have the power to shape our environmental future, simply with our day to day actions. These sweatshops and industries cannot exist without the funding of consumers who support fast fashion brands. Life as a conscious consumer does not, by any means, imply that you have to dress like a hippy, live a zero waste lifestyle, eat grass for the rest of your life and never buy the fashion and styles you love. It’s much simpler than that.

Charity shops such as Oxfam and Simon stock great finds that simultaneously fund a cause other than modern day slavery. Depop, a growing online fashion marketplace, makes it extremely easy to find local sellers of second-hand fast fashion as well as vintage and retro looks. Remember, your €10 going to a friend, fellow student or charity is much more valuable than fuelling faceless corporations who facilitate unethical trading and global destruction. It may be easier to turn a blind eye to environmental issues, but when human lives come into play, surely that changes everything? We all must play a part in taking care of each other. I know we can’t be perfect, but I believe that where we can improve ourselves, we must.