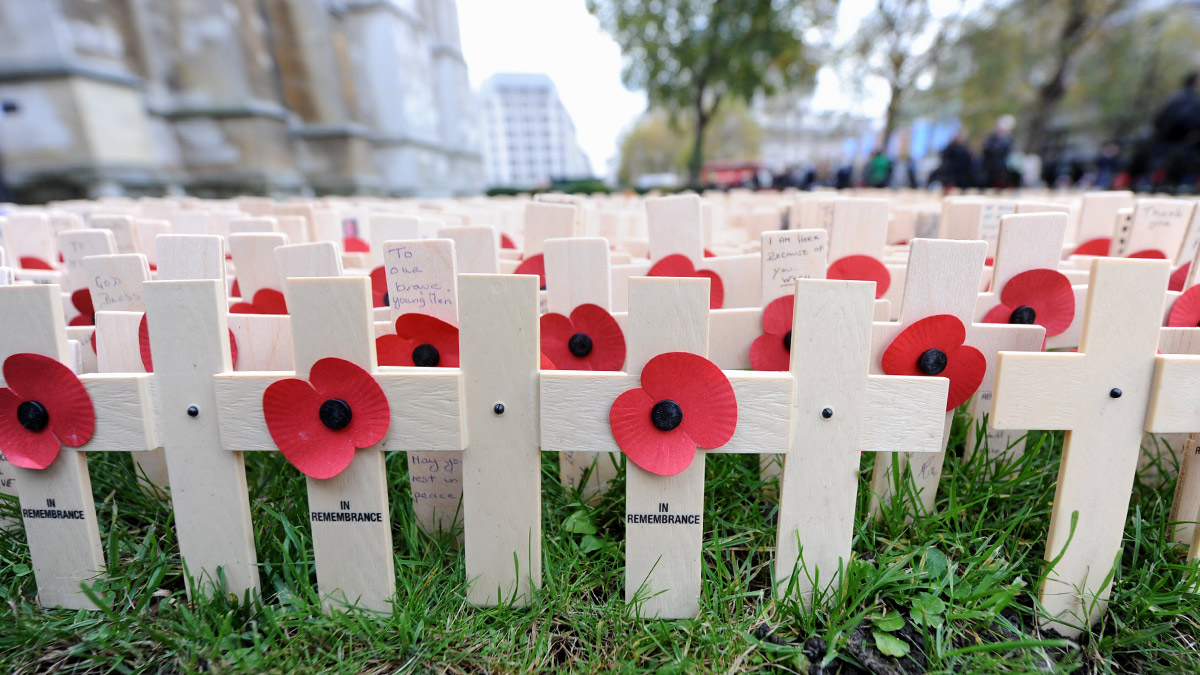 In the name of the Father, and the Son and the Holy Spirit.

We have come together today to remember ‘all those who have died in wars’ and through our act of collective remembrance to renew ‘our dedication to the cause of peace’.

Naturally we begin by remembering our own. I am thinking of my great uncle William who served as a padre during the first world war. Those in combat have spiritual needs too. Thinking about him helps me to remember all those who risk everything to take care of service men and women before, during and after combat. Fr Bill saw active service in Mesopotamia and was commended for his bravery under fire and later awarded an OBE. After the war his parishioners in Dublin referred to him affectionately as ‘Bill from Bagdad’, and when he brought home some mementos from the front – two brass shells – these pieces of ordnance were placed with honour on the mantel piece. My grandmother- his sister – polished them every day. She referred to them as ‘Bills brasses’. To her it was an important act of remembrance and so she kept them shining.

We have not always found remembrance so comforting or so easy. In Ireland we tend to confuse remembrance with conflict and so we remain partisan about our dead, choosing to remember some but not others. It is a mistake. Remembering all our dead teaches us many lessons. The dead are not prejudiced. Their view is no longer limited by our worldly traditions. They do not care that we divide them into the victorious and the vanquished. And so like the dead, we too should have no bias in remembrance.

Instead, today we choose to remember all of those that have been lost and we do not fear our grieving for any of them. We understand that this grieving is a universal act of love – a price we all pay for loosing those we have loved and lost. Remembrance helps us to heal our wounds by allowing our loving to continue even after death. Love does not end in death, but it is changed.

Remembrance acknowledges that change so that through it we can become more inclusive, more compassionate and more understanding.

Our inclusive remembrance allows us to recall all of those caught up in conflict, including the civilians and the children and all the millions described so callously as ‘collateral damage’. Remembrance helps us to recognise the true cost of war and so to strive more earnestly for lasting peace. Remembrance may be very painful but it is still worthwhile. After the second world war the German people realised that their recovery would be impossible without genuine acknowledgement of their past. Remembrance became an integral part of reconciliation. They even made a new word for it: Vergangenheitsbewältigung, they call it – working through the past in order to be reconciled in the present. This work of making peace in the present is impossible without genuine remembrance.

Inclusive acts of remembrance include as many as possible, and just as we remember the dead we also remember the injured and those who continue to suffer physical and psychological pain for years after the fighting has ceased.

Some years ago, when I worked in London, I was involved in research on a syndrome that was once called ‘Battle Fatigue’ but is now more commonly called Post Traumatic Stress Disorder, or PTSD. During this study it was my privilege to get to know several former soldiers – they were welsh guardsmen from Bridgend in South Wales – all of them injured in the Falklands War. While being deployed near the islands they had been caught in a missile attack on their ship The HMS Sir Galahad. Since then their dreams at night were filled with nightmares and their days with ‘flashbacks’ and painful intrusive thoughts. They found it impossible to rest. By scanning their brains we were able to reveal the enduring effect of the trauma they had suffered in conflict. In addition, through our study of their physical injuries we also learned that their lives had been totally altered. At one level they had ‘survived’ the war but in reality the healthy lives they once lived had died, and each new day they longed for more healthy memories.

One soldier in particular moved me – he was about six foot seven but with his injuries he struggled to fit into our scanning machine – he broke down in tears and collapsed in my arms saying to me – ‘Do you know?… I was a fine man before the war happened’.

It is said that history is written by the winners. If so it is a one-sided form of history and it is good for nothing. Peace on the other hand is made by the living whose remembrance is full. The truth is that conflicts around the globe (and in Ireland) have left millions of people dead and millions more with enduring scars. The healing of the living cannot be left to the dead. Our freedom has been won by their sacrifice. They have done enough. Now we continue by remembering them and so encouraging each other to build a more peaceful world. As St Paul puts it, we must continue by ‘encouraging one another, and all the more as we see the day approaching’.

A cannonball moment with a homeless man

Advent challenge to ‘step beyond’