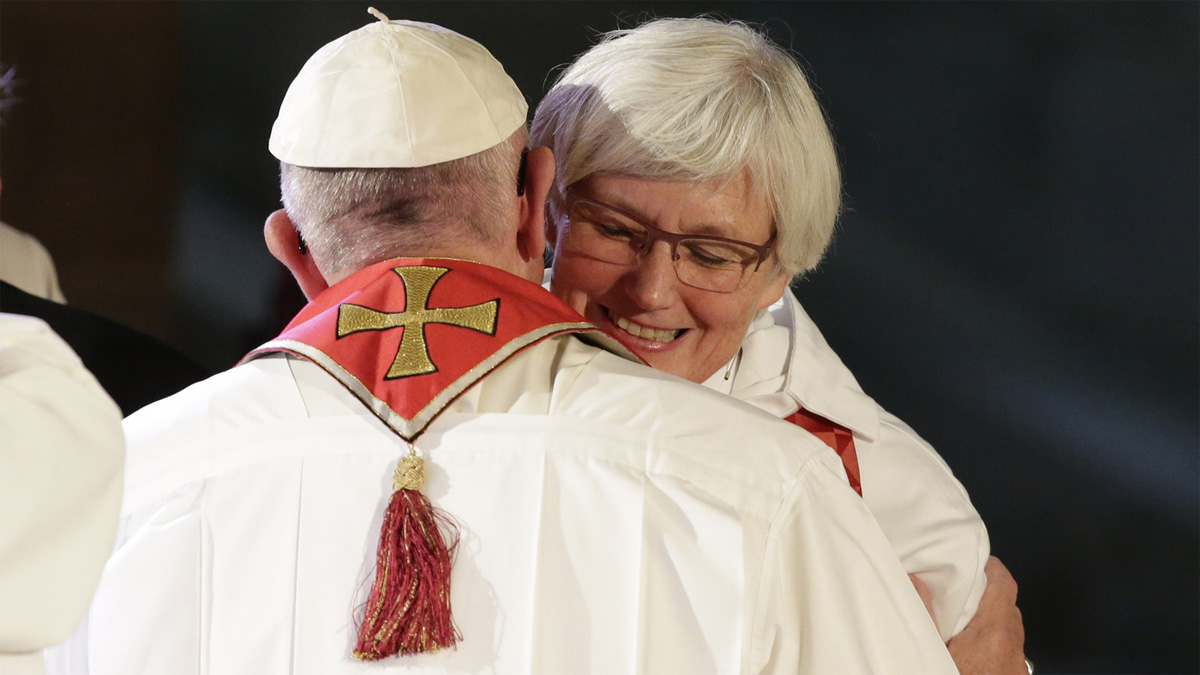 BRIAN O’LEARY SJ  ::  Pedro Ribadeneira SJ wrote the “authorised” biography of St. Ignatius in the second half of the sixteenth century. In it we read:

In the year of our salvation 1483, there was born in Saxony a calamity for the human race and an undoubted pestilence, Martin Luther … In 1521, driven by the Furies, he committed the high crime of openly declaring war on the Catholic Church. That was the very year in which God wounded Ignatius at the fort at Pamplona, to heal him and to make a brave leader out of that lowly slave to worldly vanity, opposing him to Luther as the fierce champion of his Church.

Thus was solidified a myth that the destinies of Luther and Ignatius were inextricably linked, and that the latter founded the Society of Jesus for the purpose of destroying Luther and his followers. This myth – completely unhistorical – became entrenched in the consciousness of Europe. It was incorporated into college textbooks and was taught as fact in the seminaries of Catholics and Reformers alike. It is still alive and well on the internet.

All this came to mind as I watched on livestream the 90-minute Prayer Service that took place in the stunning 12th century Lutheran Cathedral in Lund (Sweden) on 31st October. It had been jointly organised by the Lutheran World Federation and the Catholic Church. The date was the anniversary of the symbolic beginning of the Reformation — the day when Martin Luther posted his 95 theses on the door of the Castle Church in Wittenberg in 1517.

And who was present in Lund, representing the more than two billion Catholics worldwide? A Jesuit Pope! Had Francis come with weapons of defence and offense to do battle with his Lutheran enemies? Or had the Lutherans cunningly lured him into a trap so that they could capture and eliminate him? Ribadeneira would have expected some such scenario and would have been flabbergasted at the respect, friendship, and indeed love shown on both sides of the historical divide. How much has changed in 500 years!

The Prayer Service had been meticulously planned, beautifully choreographed, and enriched with colourful art and uplifting music. Even without words the ritual itself proclaimed the theme of the event: From Conflict to Communion – Together in Hope. The Service was presided over by three church leaders sitting side by side: Bishop Munib A. Younan (President of the World Lutheran Federation), Pope Francis, and Dr. Martin Junge (General Secretary of WLF). Inevitably the Sign of Peace took on a more than usual significance and depth. It ritualised the healing of wounds that Catholics and Lutherans had inflicted on each other for half a millennium. Shalom! Shalom!

Of course there were words also. Many were spoken while others were contained in a Joint Statement signed at the end by Pope Francis and Bishop Younan. This document is introduced by the words of Jesus, “Abide in me as I abide in you” (Jn.15:4). Then it moves from a confession and lament for the sins of the past to an urgent yet confident plea for the future:

We call upon all Lutheran and Catholic parishes and communities to be bold and creative, joyful and hopeful in their commitment to continue the great journey ahead of us. Rather than conflicts of the past, God’s gift of unity among us shall guide cooperation and deepen our solidarity … Rooted in Christ and witnessing to him, we renew our determination to be faithful heralds of God’s boundless love for all humanity.

There are major challenges ahead but at Lund a firm foundation has been laid.