Today marks the fiftieth anniversary of the death of Karl Barth (as well as Thomas Merton – that was a bad day for the church!). The last theologian to grace the cover of Time Magazine (although Pope Francis might be offended by such a suggestion), Barth is one of the most important Christian voices of the last century. Born in Basel in 1886, he was raised in a family with deep roots in both academia and the Reformed Church. After school, he trained as a pastor under the great luminaries of German Protestant liberalism, including Adolf von Harnack. His first charge was in the small industrial city of Safenwil, where he got heavily involved in trade union activism. At the outbreak of the Great War in 1914, he was dismayed that the intellectual luminaries who had been his teachers supported the war effort. When he saw von Harnack, along with many of the most prominent figures in liberal Protestantism, sign a declaration that came to be known as the “Manifesto of the Ninety-Three” in support of the Kaiser’s imperial objectives, Barth’s faith in progressive liberalism was fundamentally shook. He had forged a firm friendship with Eduard Thurneysen who pastored in a city a short drive to the east and together they dedicated themselves to a renewed focus on reading the Scriptures as the basis of their ministry, seeking to find a way to preach with relevance to the harried workers who gathered under their teaching each Sunday. 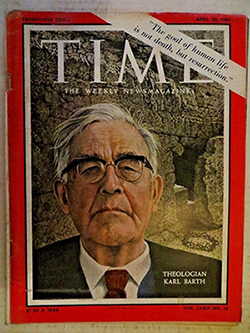 The result of this intense period of study was a commentary on the book of Romans, published first in 1919. In the aftermath of the war, this book was famously described as a “bomb dropped on the playground of European theology”. Across six revisions, and over almost 550 pages, Barth introduced his readers to the strange new world that the Bible represented. Paul was no cultured, Enlightenment-era German, somehow ahead of his time. His letter to the Romans is about the crisis created in our all steady, stable lives when we encounter the God who reveals himself in Jesus. Drawing heavily on Kierkegaard and implicitly in dialogue with Nietzsche, Feuerbach and the most articulate critics of Christianity, Barth insisted an infinite qualitative difference stood between humanity and God. Apart from the Word made flesh, we are in the dark about God. But in the light of the Incarnation, we know that God is for us. Barth brings the reader alongside Paul to feel again the drama of that letter. “The marks of human unrighteousness and ungodliness are crossed by the deeper marks of the divine forgiveness” (p. 95).

The publication of Der Römerbrief was a phenomenon, and Barth was quickly drafted into the academy. He worked first at Göttingen, then Münster and Bonn, before settling (after being exiled by the Nazis) in his hometown of Basel. Through the 1920s he read and re-read voraciously back through Christian history, being successively astounded by the riches waiting to be found in Calvin and Luther, Anselm and Augustine. He maintained a heavy schedule of teaching, supervising doctoral candidates, and a prolific writing output, as well as preaching extensively and playing an active role in the life of the church in Germany and Switzerland. He was a critical figure in the establishment of the World Council of Churches and one of the Protestant observers at the Second Vatican Council. In his later years he regularly spent his Sundays in the prison at Basel, preaching at the morning service before lingering with the inmates over the cigars he brought to share. Perhaps his most significant ecclesial influence was his support of the Confessing Church, which emerged as an opposition to the German Lutheran capitulation to Nazism. Working alongside friends like Dietrich Bonhoeffer, he supported the efforts to remain faithful to the Gospel in the face of virulent fascism. The chief contribution he made in this realm was the drafting of the Barmen Declaration which called all Christians to reject the claims of Nazism as an idolatrous false religion. He made sure to send his signed copy to Hitler personally. Unsurprisingly, his teaching position at Bonn was quickly revoked.

Safely back in his beloved Switzerland, he continued work on his major project, the Church Dogmatics. Stretching over 13 volumes, it remained unfinished – at a length of over 8,000 pages – at his death on this day in December 1968. Across the six million-plus words, numerous themes tumble together in constant conversation. Barth’s theology is often caricatured, or dismissed by hasty readers. But a careful engagement very quickly reveals how deeply embedded his work is in Scripture, how thoroughly committed (and generous!) he is to the wider Christian tradition, and how everything begins and ends with Jesus, the Alpha and the Omega.

Wandering around the biographical highlights like this can be misleading. Barth’s death should be remembered because his life’s work was remarkable. But this can be best attested by spending time with his words. Five years ago I started a PhD, intending to work at the intersection between Moral Theology and Reception History of the New Testament. I spent a year reading the history of the Irish economy. Then I spent a year reading ancient interpretations of the parables of Jesus. Then one afternoon in the summer of 2015 I stumbled across Barth’s discussion of the Rich Young Ruler passage. His precise attention to Jesus allowed me to see this story – which I thought I knew inside-out – in an entirely new light. My plans changed decisively then and there. I spent most of the rest of my time during my doctoral studies in close contact with the Church Dogmatics and Barth’s reading of the parables overwhelmed all the space I had in my thesis.

I treasured those days I got to spend doing nothing but reading old Karl in a tiny office in the attic of a small cottage on the campus of Aberdeen University. The building was grey. The sky was grey. The light seemed grey! Perched on the coast of the North Sea, closer to the Arctic circle than I would ever like to be, I found in those many, many, many pages of Barth a warm and bright solace. My attention was not drawn to Barth’s genius, but to Jesus’. Just like the figure of John the Baptist in Grünewald’s Isenheim Altarpiece (a copy of which hung above Barth’s desk), his entire purpose was to point, to direct our gaze towards the one who shows us what God looks like. God looks like a man we have rejected, but who refuses to reject us.

Whatever the future of the church in the coming decades and centuries, the work that Barth has left behind will be an essential source for renewal. His commitment to the theological task as being one that is fundamentally about God, not merely a conversation between ourselves in loud and noble voices, remains a challenge with widespread relevance. He is an example to us in the joy he took from seeking understanding of God, who in his grace has made himself known to us. Famously he speculated that the angels must laugh at his verbosity, imagining them greeting his arrival – “Look! Here he comes now with his little pushcart full of volumes of the Dogmatics!” And his insistence that the task set before Christians is to constantly take up again the questions that the church has wrestled with from the beginning is sharply applicable to us in Ireland, who often feel as if we have entirely lost our way.

Up to his final night alive, Barth was preparing lectures. Those final notes end mid-sentence. This is appropriate. A keen reader of Aquinas, he would have insisted that the most fitting end to theological project is for it to be unfinished. What theologian would ever want to have the last word? The conversation must go on.