The Greyhound bus arrived an hour late into Medway Truck Stop, outside Columbia, Missouri. For company while waiting I had a young African-American man who hopped up and down saying nothing only a high-pitched, “You goin’ ta St Louis? You goin’ ta St Louis?” and a thin lady in denim, aged mid-fifties, going to Texas, “I ain’t never bin to Texas before.” Medway Truck Stop is not a place you want to stop. A drugstore, a diner, and a ‘hotel’, accessed off a busy motorway. Almost everyone I met in the diner and store looked and sounded medicated.

The driver of the bus was super-organised. With three seats left, and three people, we were placed in a queue in the order we purchased our ticket. I was in the middle, with a big woman carrying only a cake box suddenly appearing third. St Louis was a different bus. Texas took a seat beside a big fresh-faced man, cake-lady the squashed seat behind the driver which I’d passed, leaving me with no choice but to share with a young man who was perhaps the biggest young man I’d ever seen outside of reality TV. He weighed at least forty stone. I got pitying looks from other passengers, which I chose to ignore, and squeezed into place.

He was travelling to Denver, then on to Colorado Springs, to pick up a truck. He expected to get a few months work out of this job. He’s from Georgia, but lives wherever there’s work. His home is the back of whatever truck he’s driving. He’d been travelling for almost 24-hours already, with his enormous pillow for comfort. I’d put him at about twenty-eight years-of-age. He told me he used to work two jobs, the other being a bouncer at a strip joint.

When it came to my turn to talk, I told him I had been visiting a friend in Missouri who was seriously ill, and how I was sad to leave her. I said I was heading to southern Kansas to spend some time with good friends before flying home. He didn’t make the usual jokes about the Bible Belt, so I told him how much I loved Kansas, the wide open plains and enormous skies, and the refreshing open faith in God people express as their day-to-day way in the world. The wide open skies got us to talking about photography, because it turns out he likes to take photographs out of windows too. With a passion. With a passion I’ve only ever seen in one other person, and that person is myself.

His phone home-page image was of a lady who worked at a strip joint, and he wasn’t the least embarrassed for me see this image. I was to see it often as he referred to his phone repeadedly to show me more and more photos – the most gorgeous out-of-the-window scenery photographs I have ever seen. His trucking job, he told me, had taken him to 47 out of the 48 States (exempting Hawaii and Alaska), and he could say with absolute conviction that New Mexico was the most ‘enchanting’ State (his word, not mine).  I was to see blue mountains, cloudscapes like never before, valleys, trees of Vermont in the autumn, New Mexico all purple haze… He had photos down the cheese caverns of Springfield, Missouri, a two million square foot ‘town’ of roads built underground to store, and even mature, cheese. This led to talking about natural caves: “My friends go cavin’, but I don’t go cavin’,” he told me. “I said to them, ‘this big boy ain’t goin’ cavin’. He’d for sure get stuck down there’.”

He explained he’s often on the road before there’s any traffic, so it’s safe to use one arm to take photos. His photos had never been processed; never straightened, or enhanced in any way. Nor did they need processing. With a natural eye for composition, this man drove along in his truck making images with his phone camera that could hang in any gallery.

The Greyhound bus seats fifty souls. Each one has a story. 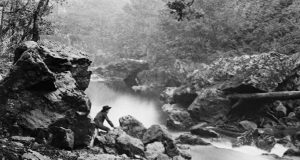 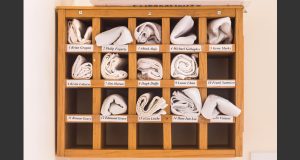 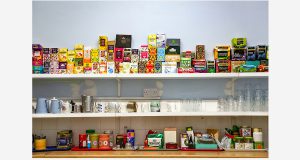 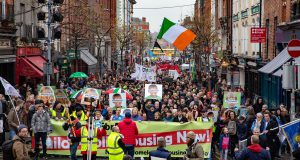 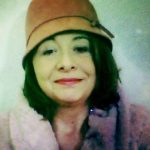 Paula Nolan is a graphic designer with many years of experience working in the Irish publishing industry. Currently she does graphic design for Messenger Publications.