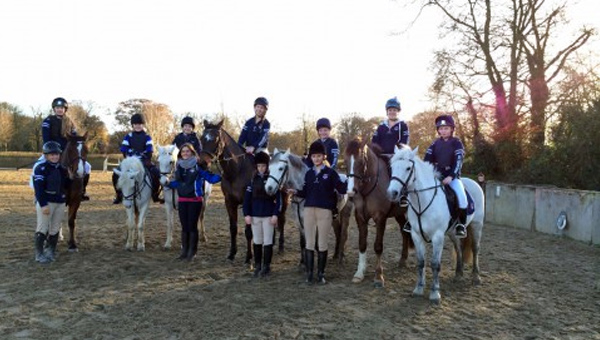 “If you walked into my office in Crescent College Comprehensive today, you might justifiably wonder what kind of job I have here. A smell of horses lingers in the air from the six pairs of riding boots under the desk.” So writes the Principal of CCC Limerick, Nicholas Cuddihy. The Crescent now boasts an award-winning Jockey Club, ‘a perfect witness to a holisitic Jesuit education’. The notice board covering one wall of the office is decorated all along its top edge with rosettes of different colours.  A second board has a medal for first place pinned to its centre while on a corner of the desk a photo of six smiling boys in riding gear cannot help but catch the eye.

The Jockey Club was set up this year by students who have come to the school through a school completion programme in a nearby primary school. These students have grown up with horses, ‘so the club boasts a collective wealth of knowledge about horses, their care and training and riding that is impressive even to the learned in these things’, according to Nicholas. His account below of this equestrian triumph at the Crescent is well worth a read.

A ‘Horse Outside’ at CCC

The truth is that I have never been out on a horse in my life – although that is all set to change this week, thanks to a deal which traded this challenge for two weeks of good behaviour by a ‘jockey’ student some time ago.  However, there is no better group to teach me a thing or two about horsemanship than that of the six boys which make up the CCC Jockeys Club.  These students have grown up with horses, literally, as you would see if you were to drive through the estates where they live, where it is not at all unexpected to see a horse or two ‘outside’, grazing in a green area at the centre of a crescent of houses.  The jockeys learned to ride bareback and can judge the temperament of a horse as well as the best of trainers.  Most of them keep their own horses at home in local fields (although space is a problem – but more about this later); some own and care for up to eighteen horses at a time.  Some manage and train horses for others.  Suffice it to say that there is plenty for them still to do at home after a hard day’s work at school.

All of this knowledge and talent may have gone unnoticed among the daily necessities of maths and science and history and geography, to say nothing of hockey and rugby, if it wasn’t for the grace of a wonderful student teacher, Kayleigh Maher, who has brought her own equestrian talents greatly to bear on CCC this year.  Add to the mix one ex-jockey and racing fanatic teacher, Mr John Gavin, one anonymous benefactor with a drive for all things Crescent who was happy to fund lessons, and six madly enthusiastic students, and the Jockeys Club was up and running!

Lessons were organised in Clonshire Equestrian Centre in Adare, once a month to begin with but this was almost immediately increased to twice a month due to the level of interest and the desire to progress.  As a key worker with the school completion group I was lucky enough to be involved with the Jockeys from the very beginning, and I will never forget the first lesson in Clonshire.  The instructors were obviously impressed with the boys’ skill and understanding, as were all of us present.  To see these students, who frequently struggle to keep up academically, shine having been given the opportunity to do something they are really good at, was a moving experience, to say the least, and an important witness to the holistic ideals of Jesuit education.

The Jockeys have gone from strength to strength since that first lesson.  In March they competed in three show-jumping competitions in which they all performed with clear rounds.  The last competition was an inter-schools event organised by Kayleigh; the boys were delighted to take home five rosettes and one medal for their school.  These will be proudly displayed alongside the many other trophies marking an incredible year of successes for the school in sports and science.

For me the learning has been invaluable.  I have learned about horses and I have learned even more about life, in all its variations.  For the students who make up the CCC Jockeys Club life has provided them with many challenges; they stand undefeated.  Now in a small way the shoe is on the other hoof as they watch me take up their challenge of getting up on a horse for the first time.  They are laughing already and I have no doubt that it will be entertaining.  Meanwhile they are looking forward to their end-of-year trip when, accompanied by Kayleigh and John and along with the school’s other equestrian team, they will get to visit the National Stud and to meet representatives of RACE, the national association which trains professional jockeys in Ireland.  For sure there will be much to talk about.  In proper racing form I leave you with a tip; watch this space and remember these names: Craig Corbett, Alan O’Donnell, Dale Hannon, Shane O’Donnell, Dylan Hannon and Tony O’Donnell.  They have already proved to be well worth a gamble.

An atheist at Mass

A day of four popes