A retreat with a difference

‘Mindfully at Home in the Cosmos’ was the title of the spring retreat in the Manresa, the Jesuit Centre for Spirituality in Clontarf, Dublin. It was given by Dee Hennessy and Des O’Grady SJ and in this interview with Pat Coyle of Irish Jesuit Communications they talk about what happened during the retreat and their work in general. They also give details and dates of their future retreats which you can find out about here.

Des O’Grady is chaplain in Dundrum Mental Hospital. Earlier in his Jesuit life he lectured in philosophy in the Milltown Institute. His interest in cosmology and the work of Teilhard de Jardin SJ has grown out of a dissatisfaction with a development of Christian practice that he feels has turned the Church into a type of ‘club’ with members who are ‘in’ and others who are ‘out’. He believes this type of exclusivity has nothing to do with the cosmic Christ nor does it reflect the infinite goodness and the indiscriminate love of the Creator of the cosmos.

Similarly Dee Hennessy, a mindfulness practitioner, came to mindfulness feeling dissatisfied and poorly nourished by the Christian theology she studied. Ironically, she now says that her practice of ‘living in the moment’ and ‘surrendering in trust to the present with awareness’ has brought her back to a deeper appreciation of her Catholic faith.

Dee and Des have been giving retreats around the country. They are clear that they do not teach mindfulness or cosmology but rather they engage participants in the actual practice of living mindfully and experiencing themselves as an integral part of creation, connected to the cosmos. They do this through  prayer and meditation, breathing and movement exercises, stillness, silence, walks, group sharing and one on one spiritual accompaniment.

In this interview they address the danger of ‘mindfulness’ becoming just another technique or fad that is potentially as unrealistic as it is helpful. They also take on board the challenge of what ‘coming home’ really means when it’s a coming home to a created world that is, as Shakespeare describes it, ‘nature red in tooth and claw’. 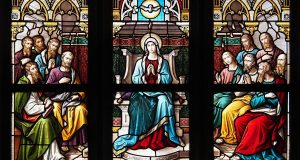