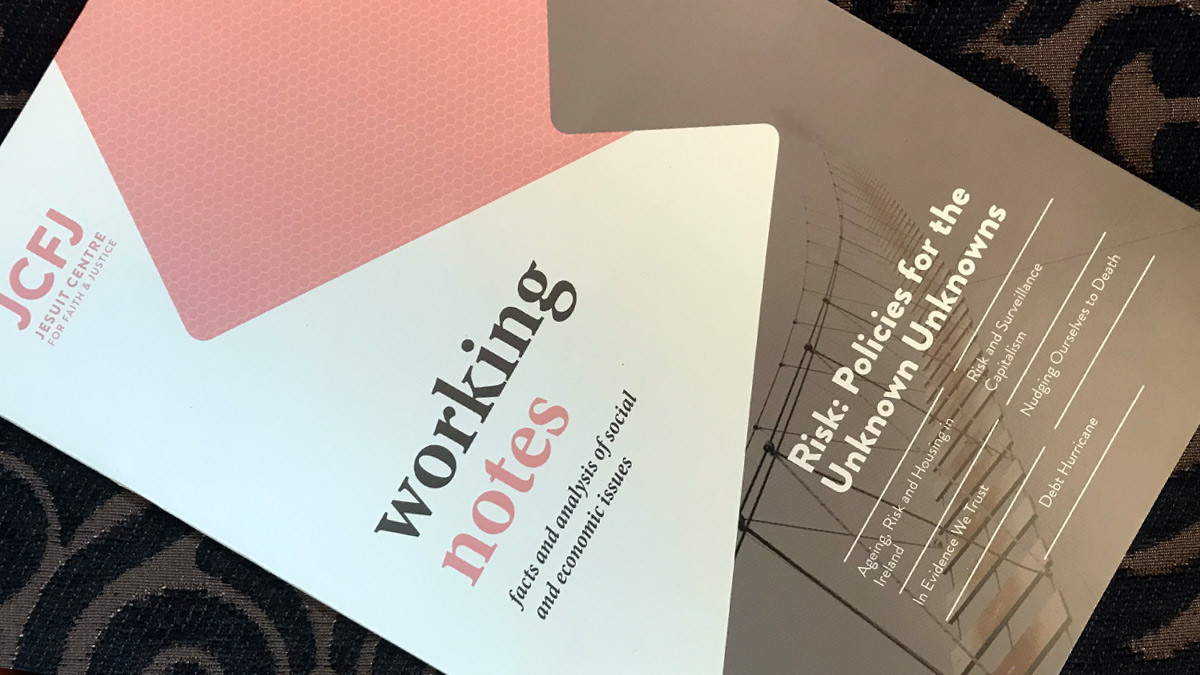 The October issue of Working Notes takes a look at concrete issues of public policy – climate breakdown, housing provision, surveillance capitalism – but views them in terms of the conceptual framework which informs them. At the heart of the issue is the sense that beyond all the known threats to policy-making, there are always a great number of “unknown risks”. We cannot evade these risks, but we can control how we respond to them. Nor can we simply fail to act; what matters is where we put our trust when we act. “The supreme ethical risk,” the editorial argues, “is complacency.” All said, then, we need to be attentive to the ways in which we set policies and attentive to the concrete realities which are impacted by them.

Many of the articles suggest that the risks in public policy are time bombs which Ireland is simply not prepared for. For Joe Larragy, the “demographic time bomb”, specifically the certainty of large-scale societal ageing, will have predictable catastrophic results, but the response to date at the level of policy is negligible. Larragy sees the shift in the economically depressed 1980s away from statutory social housing to have increased the risk. As Ireland recovered in the Celtic Tiger years, there was no will among policy-makers to get back on track with social housing; instead they favoured market-driven responses to filling the supply gap.

Margaret McGaley’s contribution throws the spotlight on ‘surveillance capitalism’, the high-level threat to the values which we prize but do less and less to protect. We have allowed smartphones, social media, and the internet to become integrated in more and more ways into our lives, without much thought for oversight. The risks here are huge. “The powerful,” McGaley remarks, “have always dreamed of controlling the masses by close supervision, but it has never been such a realistic proposition as it is today.” We are practically oblivious to the massive trail of data we leave behind us whatever we do and wherever we go. “Our everyday choices,” she adds, “are being closely observed and their implications analysed. And it is rapidly leading to a situation where attempting to protect your privacy looks like criminal activity.”

Keith Adams, social policy advocate with the Jesuit Centre for Faith and Justice, writes impressively on the tremendous risks which policy-makers run by taking an ‘evidence-based’ approach to research for public and governmental policies. This approach was touted as a welcome science-based change from the old way of relying on past practice, anecdote and ideology. But, Adams argues, it plays easily into the hands of the dominant mindset, in Ireland’s current case “the econometric language of neoliberalism and austerity”, and thereby merely camouflages “the ideological commitments which drive policy development”.

‘Above all I believe in people’

Justice and the Irish State

Ireland after the Climate Action Plan: A laggard, a leader, or a middle-manager?

“Hans, are we the baddies?”