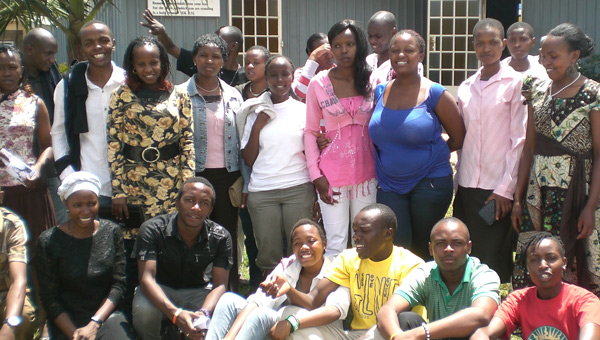 Three Jesuit colleagues recently visited the Eastern Africa Jesuit Province to explore opportunities to grow links between schools and  the Magis Young Adult Ministry here and in Africa. They travelled long and far, spending time with Jesuit communities, schools and youth ministry groups – ‘graced days’, according to Noelle Fitzpatrick of Magis Ireland, the Jesuit Outreach to Young Adults. She was accompanied by Education delegate Brian Flannery, and Dermot Cowhey of Crescent College Limerick and below is her moving account of a continent beginning ‘to shine’.

The Magis in Africa: Graced days in the company of the Jesuit Eastern Africa Province

It is so easy to get up early in Africa. The mornings are bright and balmy, there is always a cockerel nearby for a pre-dawn wake-up call, and an easy culture of early rising. Besides all this, sunrise and sunset come so fast that to not be up means to miss out on the best bit of the day.

Recently I was part of a delegation of three from Ireland who visited the Eastern Africa Jesuit Province to build on already strong relations, and explore possible opportunities to grow links between schools and Magis: Young Adult Ministry here and there. We travelled much – spending time with Jesuit communities, schools and youth ministry groups in Tanzania, Uganda and Kenya. Everywhere the hospitality was exceptional – manifested most powerfully to me by the quiet welcome to be part of morning Mass, evening prayer and to make as if chez toi.

On our arrival into Tanzania that first evening a young Jesuit Regent, school teacher in the Loyola High School and Resident guestmaster collected us with his companion from the airport in Dar Es Salaam. We were fed and watered with gracious ease and wandered off to bed. Next morning we had a quick tour of the impressive Loyola High School (established 1994) before hopping a bus to Dodoma – the administrative capital of Tanzania some 450 kms inland. In Dodoma lies the brand new Peter Claver High School and also Jesuit parish.

The road from the coast was busy with heavy goods vehicles even on a Sunday morning and we arrived at nightfall, graciously deposited at the mouth of the dirt path leading to the school in the middle of no where in particular. It was a bit like the crop dusting scene from Hitchcock’s ‘North By Northwest’ but without the crop duster! As we wandered in through the gates even at night the scale of ambition and daring was manifest in the darkened outline of the school buildings.

Next morning we attended the assembly of boys and girls just back from holidays struggling to be enthusiastic about the start of another school term and exams! The prayer of St Ignatius was recited, students and teachers made various announcements and all dispersed into the work of the day. The headmaster, deputy and dean of studies were young regents from Tanzania, Kenya, Sudan, shouldering huge responsibility with humility, eagerness and good humour.

The average age of Jesuits in this Province is 42. There is a Magis group in the school, and two Jesuit Volunteer Communities from the USA on fire with the desire to serve and be part of this new exciting enterprise. A notice about Pope Francis on the staff room blackboard and a list highlighting the names of ill students inviting staff to offer particular support to them characterised in small but meaningful ways some of the essence of a Jesuit school. Later on we were lucky to enjoy a community evening shared between Jesuits from the parish and other collaborators in mission – amongst them religious sisters and six young American JVC’ers and volunteers from the Jesuit Mission Office in London.

A few days later we were in Gulu, Northern Uganda an area for the last 25 years ravaged by the violence of the Lord’s Resistance Army. Jesuit Refugee Service had a presence here until relatively recently, but the camps that held the tens of thousands of internally displaced people and the children who commuted here each evening to escape night raids by the LRA in local villages are no more. The huge work of rehabilitating lives and community continues more subtly.

A few kilometres outside Gulu along a half chewed road, is the Jesuit Ocer Campion High School. The gates open and people from the local community come to work on the small farm, in the class room and as cooks and cleaners. The school sits on almost 100 acres in a place of natural beauty. Students and members of a very impressive Magis group were eager to interact with us. They wanted to know about Ireland, asking  whether we had wild animals or how many rainy seasons there were?  (I volunteered one …continuous!).

They asked about our food and our school life and Magis groups in Ireland. They questioned with fun, confidence and voraciousness. I was particularly taken by the confidence of many of the girls. In a continent where formal education of girls is still growing in acceptance, I suspect they are an exception to the rule.

Our last days were spend in Nairobi, Kenya and home to many Jesuit works. It was nice to catch up with scholastics who had spent time in Ireland and were now assuming positions of significant responsibility at a Jesuit Third Level Institute and Communications Centre. Sunday Mass was in the Jesuit Parish of Kangemi – a parish of stark contrast between rich and poor and once home to John Guiney SJ and Gerry Whelan SJ. Young members from Magis Kangemi sung in the choir and an immensely enjoyable homily was delivered with humility, good humour, quiet wisdom and easy informality.

This trip was a great affirmation of all that is good in the Jesuit way of proceeding; all that daring, energy and enthusiastic embrace in the service of faith and promotion of justice. I for one returned tired, enlightened, reflective, encouraged and grateful for what is, and for what may be. Africa’s time has definitely come and it was a privilege to be witness and partner to a creeping new dawn.

Moving into the new Coláiste