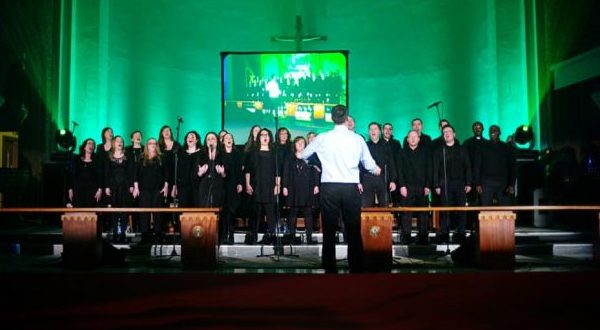 An atheist at Mass

The Irish Times on 24 April carried an article with a strong Jesuit interest and a fresh perspective on attending Mass. Rosemary McCabe, a self-styled atheist, who applied to defect from the Catholic Church in 2009, wrote:

Until last September,  I had been to Mass an average of once a year since 2002. Since then I go once a week to the Gardiner Street Gospel Mass on Sunday evenings at 6.30, where I sing in the choir. Catholicism is not a condition of membership, and we are not obliged to join in with the rest of the Mass – although, to the best of my knowledge, I am the only one who doesn’t (with the exception of offering the sign of peace, which is utterly unavoidable).

The biggest surprise is just how much I enjoy it: singing, seeing the same faces filing in each week, listening to the sermon and the parish announcements, and learning lessons I had thought myself too far gone to take on board. Mass has taught me more than I ever thought it could.

1. Prayers don’t matter. At least, the wording is not important. As an eight-year-old girl preparing to make her First Holy Communion, I was marched into the church near my primary school in Rathcoole, Co. Dublin, to learn by rote what felt like hundreds of prayers. A word out of place earned a swift reprimand; a forgotten line was punishable by being made to write out the full prayer 10 times. Since then, however, both prayers and responses have been changed – leading me to believe quite strongly that, despite what we were taught, it’s not the words that matter but the sentiment behind them.

2. Community matters. There is a group of people with disabilities (from l’Arche Ireland) who attend the Gardiner Street Gospel Choir Mass. They sit up front and play along with the band with hand drums and cymbals. There is a South American man in his early 20s who act as altar boy and sometimes does a reading (there is only one, unlike in my day). There is an African family – two girls, a boy and their parents – who sit in the second row. That these people have something in common should not be underestimated.

3. Pope Francis is deadly. Fr Donal Neary, the priest at Gardiner Street, has yet to give a sermon without mentioning Pope Francis, who is, by his own admission “my favourite Jesuit”. Fr Donal approves of the new, if not quite liberal, then slightly softer direction the pope is taking the church. He talks about the pope as if he were an old friend; he offers digested versions of papal pronouncements to a parish that may not be entirely up to speed with the goings-on in the Vatican. (For the record, Pope Francis is my second-favourite Jesuit; my favourite is Fr Donal.)

4. Nobody’s perfect. Of course we all know nobody’s perfect. But sometimes it’s difficult to believe that everyone else knows this. Supermodels, for example, may think they’re quite close to being perfect; priests, I once assumed, think likewise. But each week, while urging his parishioners to think of others, to be kind and forgiving and generous (so far, so Catholic), Fr Donal makes reference to his own failings. “I know” he says, “that I could do better this week” There is a comfort in the fact that even he is not as kind, as forgiving and as generous as he would like to be.

5. It’s good to listen. Quite a high proportion of biblical tales and readings from assorted books go over my head. I have little interest in allegorical tales, especially when I’m sceptical about their origins and veracity. But in listening – mostly with a view to catching the priest saying something sexist or homophobic that I can immediately use to affirm  my own prejudices – I’ve been pleasantly surprised by the everyday applications of these tales of yore, and the distinct lack of the aforementioned phobias that I anticipated.

6. You can make a difference. Fr Peter McVerry occasionally takes the Mass on Gardiner Street. He is a friend of Fr Donal’s and of the choir’s (recently we sang at a Christmas concert with Mary Black in aid of the Peter McVerry Trust, which works with young homeless people). Late last year he told the story of Zachariah (Luke 19, 1-10), the tax collector Jesus chose as his host while he was staying in Jericho. Zachariah, universally loathed by the townspeople, was shocked that Jesus chose to stay with him. Fr McVerry used Zachariah to explain what a difference you can make to someone by looking at them, by acknowledging them and by refusing to judge based on the judgements of others. Since then I look charity workers in the eye when I say No. I stop for homeless people and, when I can, offer them a cup of tea. I smile at mothers whose children are screaming in the supermarket queue. I figure Fr McVerry is right – ignoring someone is never going to help.

7. Mass is what you make it. I don’t find Mass to be a religious experience. I don’t come away feeling closer to Jesus or more assured in my faith. Instead, I like the music, the guest speakers, Fr Donal’s sermons and the impromptu percussionists in the front row. I like the moment, after Communion, when the lights are turned off and we are invited to take a moment to sit in quiet reflection. I like the tea and biscuits in the parish hall afterwards, but mostly I like the comforting familiarity of it all: seeing the same people in the same routine, taking time out to practice their beliefs – or, like me, just to sing along.