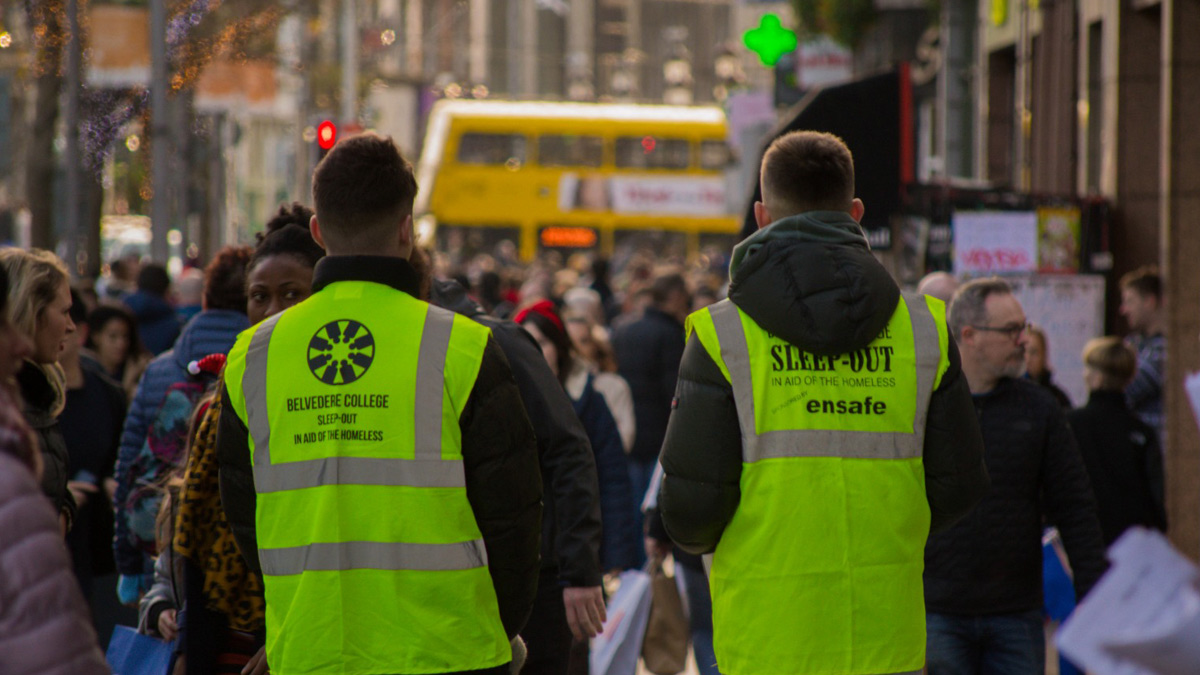 The Belvedere College SJ annual sleep out to raise money to combat homelessness will take place  22 to 24 December 2019 between two locations – outside the Bank of Ireland, College Green, Dublin 2 and at the G.P.O. O’Connell Street Dublin 1.

Over 100 students, teachers, past pupils will be taking part in the annual sleepout which last year raised ​€178,500 for Focus Ireland, the Peter McVerry Trust and HomeAgain. These three charities will once again receive the money that the students gather after fasting and sleeping out on the streets of Dublin at Christmas time.  Donations can be made on the street during the event and also online at any time .

A very successful SleepOutSelfie campaign was organised by the students last year and ordinary people and celebrities posted selfies of themselves and others while holding a #SleepOut18 sign. A similar campaign is underway this year for #SleepOut19.

Three of the team of students organising this year’s event did the sleep ut last year. Harry Hamlett-Maguire, Hugo McPeake,and Euan Farquharson braved the lashing rain last year and in their own words experienced how tough it can be for people sleeping on the streets. In the interview above with Pat Coyle of Irish Jesuit Communications, they talk about the highlights (being joined by the homeless choir High Hopes for carol singing) and the lowlights – the weather! Euan talks about getting into a comfortable bed on Christmas eve after a warm shower and only being able to think about the people in the streets sleeping out, wondering how they survive it night after night.

Other members of the team, Sean Meany, Oisín Kealing Mc Dermott, Tom Rafter, and Scot Meaney will get their first taste of sleeping rough this year. But they are not unfamiliar with the plight of the homeless. They are part of a soup-run, organised by the college’s St Vincent de Paul society and they regularly deliver soup to homeless people on the streets whom they get to know personally and by name.

Oisín points out that there were 10,514 people reported ‘homeless’ in October 2019.”3,826 of that ten thousand are children,” he tells Pat, adding,” that’s an increase of 380% over the last five years.” He says the actual homeless figure is actually probably way more than that because the 10,514 government estimate does not include the ‘hidden homeless’ who are living squats or ‘sofa surfing’. Nor does it include people who are living with friends or those who are living in domestic violence refuges. The three charities supported by SleepOut19 aim to combat this issue that is becoming ever more prevalent in today’s society.

Harry Hamlett-Maguire, who did the sleepout last year, says it’s terrible to think that one year later, this crisis has got worse, not better. He quotes Peter McVerry SJ who writes in his latest book, A Dose of Reality, There is something profoundly wrong when in one of the wealthiest countries in the world …we have a record number of people homeless.”

Harry says that he and the students are aware of how lucky they are to have a roof over their heads and a good education. That’s why they want to give something back and do whatever they can to help people and to inform themselves about the inequalities in our society that have given rise to this unprecedented homelessness emergency.

He is hopeful that this year they can collect even more than last year when the amount collected was slightly lower than in 2018. “We put that down to the awful rain which probably put off lots of people from coming into the city centre. Hopefully this year the rain will stay away.”

Bringing good out of enormous tragedy