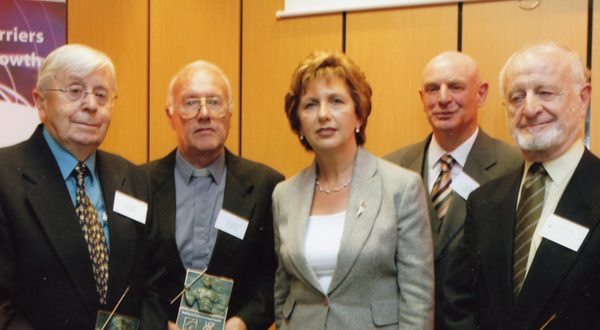 Dermot McKenna, just turning 84, is celebrating the silver jubilee of the Bolton Trust. He traces his interest in cooperatives to Maggie Thatcher. In 1987 Dermot was a chaplain in Bolton Street College of Technology,… and teaching management and industrial psychology to engineers, showing how people can achieve a lot if they organize in small groups.

In the terrible recession of the 1980s (not as bad as the one we are suffering now) he and his colleagues saw their graduates snatched off to jobs in the offshore island by interviewers sent over by English companies.

“After all our labours, off they went to work for Maggie Thatcher. A group of us used to meet over lunch, and eventually came up with the idea of setting up a kind of co-op, a company limited by guarantee. 25 years ago we formed the Bolton Trust which started in Bolton Street and spread to the other DIT colleges. Its mission is to foster entrepreneurship and grow sustainable indigenous enterprises. A lot of teachers joined in, salaried by the DIT but giving their services freely to the Trust. A key figure in the development was Rea O’Neill, who has put enormous work into it and is highly regarded in all the colleges.

“The ESB gave us an old hotel down on the docks where we could bring in people and they could set up their own companies. At first we used that as our centre – about 20,000 square feet, which was rather small. In 1999 the Bolton Trust took over the East Wall Enterprise Centre from the IDA, renamed it the Docklands Innovation Park (DIP) and formed a long-term plan to upgrade the extensive facilities and create a hub for enterprise and innovation.”

The DIP is now home to some 40 established companies, and it “incubates” a further 40 start-ups every year. Its tenants employ some 350 people. It is central, connected by road and rail in all directions, with excellent online and phone services in its modern and secure offices. It is well described as a dynamic entrepreneurial environment. In its meeting rooms you sense a buzz of young, technically sophisticated people whose horizon is the globe.

The Bolton Trustees still remember with gratitude the support of Dermot McKenna throughout its life (he is still Vice-President), and the financial help of the Irish Jesuit Province at a time when the DIP was just a bright idea, a sign of hope. It is an example of two of the three dimensions which Fr General seeks in our ministries: the promotion of justice and collaboration with others.

The photo shows four pioneers of the Bolton Trust at the celebration of its 20th birthday with President Mary McAleese: L to R: Jack O’Keefe, head of Architecture; Dermot McKenna SJ; the President; Rea O’Neill, the key man who has kept the operation moving; and Eddy Laverty, a lecturer in DIT.