Brief encounters and the eternal city 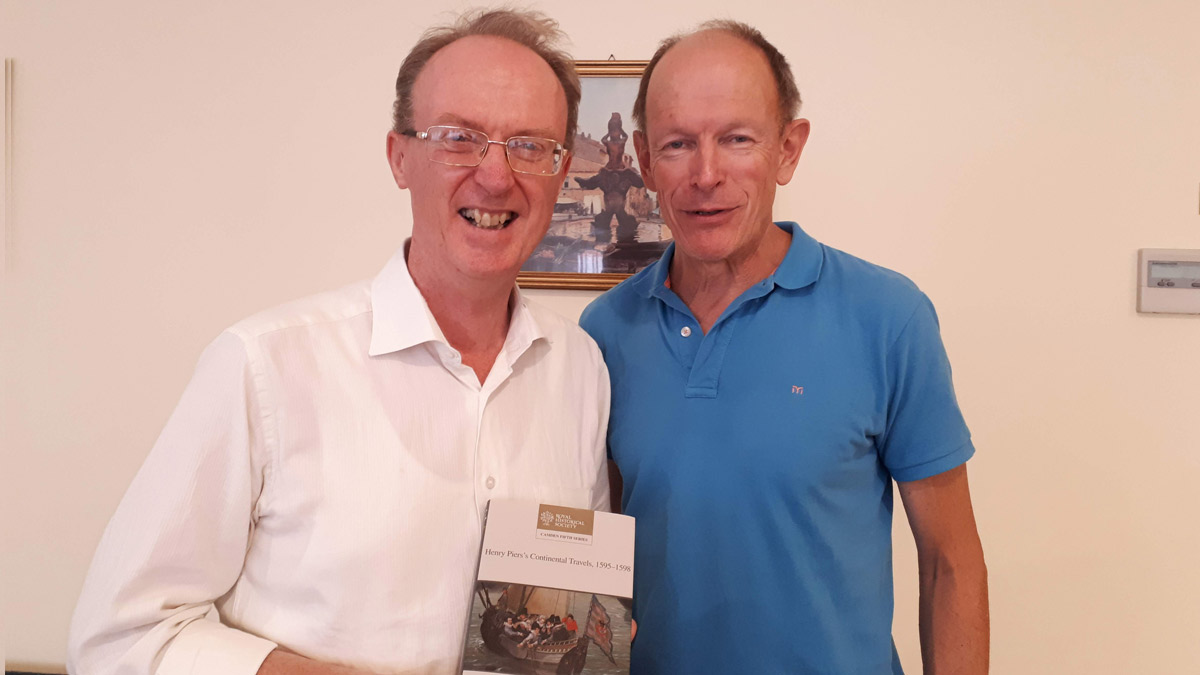 Historian Brian Mac Cuarta SJ, Director of the Jesuit Archives in Rome, is author of a new book about a County Westmeath layman’s journey to the Italian capital in the 1590’s. The book is a lively travel account of Landowner Henry Piers and his conversion to Catholicism during the heightened political and religious tensions of the time in Ireland.

The book describes Pier’s life in Rome (1595-7) which included an encounter with the Inquisition. As an eye-witness, Piers offers a unique take on the Elizabethan Catholic diaspora in Italy and Spain during the turbulent decade of the 1590s.

The book is the 5th in the Royal Historical Society’s (RHS) Camden Series of annotated primary source documents. Writing about his work in an article on the RHS website Brian noted that  religious autobiography is a rich source for those exploring mentalities in early modern society.  But he says that texts from the recusant community (those who refused to attend Church of England services in Ireland) are less numerous.

“Henry Piers (1567–1623) combines a travel memoir with his conversion narrative,” says Brian, describing how Piers encountered the Hospital of the Holy Spirit near St Peter’s in Rome, a renowned state-of-the-art infirmary. Piers described patients, “lying two or three to a bed. There was also an orphanage. At the entrance there was a revolving aperture – a newborn baby could be placed on the turntable and it would pass inside, where every foundling was admitted.”

According to Brian, Piers was a “scion of an English military family recently settled in Ireland, through the marriage of his sister”. “Piers,” he continues, “encountered a vibrant recusant community among some Dublin patricians. About the same time, while on a visit to England, he listened to puritan preachers and so experienced at first hand the vociferous dissatisfaction of some with the Elizabethan establishment. These encounters led him towards the Roman church.”

Henry Pier’s Continental Travels:1595-1598 is published by Cambridge University Press. You can read Brian’s full blog post for the Royal Historical Society below.

The text of Henry Piers’s travel journal – published here for the first time – attracted me initially because it offered a layman’s voice from the recusant community which straddled England and Ireland in the 1590s. It describes a journey to Rome through the Low Countries, Germany, and Italy in 1595. There are echoes of the Elizabethan fascination with Italian culture – brief encounters with English travellers are noted (the grandsons of William Cecil, for example, and the earl of Sussex), and the author’s passion for music emerges when recounting an evening spent singing with a household group in Padua. John Dowland, the composer, reported meeting the author in Bologna. While many young Englishmen studied for a time at Padua, few proceeded to Rome; this account is a detailed and extensive account of a Catholic layman’s stay in the Eternal City.

The Hospital of the Holy Spirit near St Peter’s was renowned as a state-of-the-art infirmary. The author described seeing the patients lying two or three to a bed. There was also an orphanage. At the entrance there was a revolving aperture – a newborn baby could be placed on the turntable and it would pass inside, where every foundling was admitted. Piers saw the courtyard, where nurses carried the infants, and the older children were occasionally brought in procession to attend various events outside.

Piers has left a particularly vivid description of the Easter procession organized by the Spanish community at Rome’s Piazza Navona: flaming torches, the vivid banners of the various confraternities, choirs, bands, and a mock battle between the Turk and the king of Spain. The relics of the early Christian saints and martyrs were significant for him. Simon Ditchfield has written of how late sixteenth-century Rome was becoming increasingly known in the Catholic world as the repository of primitive Christianity. This memoir illustrates the impact of the city on the Catholic imagination of one Elizabethan layman. The author also adverted to the particular situation of the Roman Jews, with their yellow hats, living enclosed in the ghetto, dealing in old rags for a living, and constrained to attend special sermons that might lead to their conversion.

Religious autobiography – generally reflecting an evangelical if not puritan outlook – continues to be a particularly fertile genre for exploring mentalities in early modern society. Texts from the recusant community however are less numerous. Henry Piers (1567–1623) combines a travel memoir with his conversion narrative. Scion of an English military family recently settled in Ireland, through the marriage of his sister, Piers encountered a vibrant recusant community among some Dublin patricians. About the same time while on a visit to England he listened to puritan preachers and so experienced at first hand the vociferous dissatisfaction of some with the Elizabethan establishment. These encounters led him towards the Roman church.

Thus the book affords a rare lay perspective on conversion to Catholicism; its value is heightened by the author’s origins in Ireland and connections in England, thereby illuminating a recusant community which straddled both realms. Piers’s travel companion was Philip Draycott, aged 22, of a noted Staffordshire recusant family; the text illustrates how a young Englishman travelled to one of the new English seminaries on the Continent. Having finished his schooling at the Jesuit-run college at St Omer (founded 1593), Draycott briefly moved to Ireland where he became servant to Henry Piers: an example of those Irish gentry who sheltered recusants seeking respite from anti-recusancy measures in late Elizabethan England.

While in Rome, Piers stayed as a lay student in the English College. There under Jesuit guidance, he deepened his knowledge of the Catholic faith, and followed the seminary courses in philosophy. Piers’s account adds vivid detail to our understanding of the febrile world of the Elizabethan Catholic exiles in late sixteenth-century Rome, where spies mingled with seminarians, and an appearance before the Inquisition was normal for many northern Europeans. Piers’s family origins in colonial Ireland made him the focus of animosities in Rome between English and Irish, tensions sharpened by the recent Ulster revolt against the crown. He became friends with Robert Persons, the noted Catholic polemicist and seminary founder; Henry’s sojourn in Spain just after leaving Rome, where he visited English Jesuit colleges in Valladolid and Seville, reflects connections doubtless facilitated by Persons.

A further dimension is that of the Elizabethan in Spain. Pauline Croft has delineated the shadowy world of the English merchants operating in southern Spain during the trade embargo arising from the Anglo-Spanish war (1585–1604). Piers lived as a student in the English College, Seville, in 1598. The collegians used to visit English prisoners of war. Irish merchants, too, were caught up in Spanish measures against English traders. Ships and merchandise were confiscated; at times the merchants were imprisoned. Piers lobbied English Jesuits to use their influence with Spanish officials in favour of these Irish traders. Spanish forces had captured Captain Richard Hawkins off the Pacific coast of South America. At this time Hawkins was in gaol in Seville. He escaped briefly; in the subsequent crackdown Piers was arrested, suspected of being an accomplice. The Irishman was scheduled to face interrogation on the rack; only the fact that he could present testimonials from his time in Rome saved him from this fate.

Replete with firsthand detail (including storms at sea, and an encounter with ruffians in an inn) Piers has given us a gripping travel memoir framed by his spiritual quest. The many emendations to the text, together with the attempt to identify places and individuals, have presented particular challenges. While extending the range of Elizabethan travel writing by adding a distinctly recusant voice, his account illustrates the difficulties facing an Elizabethan living in Rome and Seville at a time of particular stress in the complex military and religious landscape linking the Tudor world and Catholic Europe.

Brian Mac Cuarta SJ is Director of the Archivum Romanum Societatis Iesu. With thanks to the Royal Historical Society blog.

Religious are essential to the Church’s mission