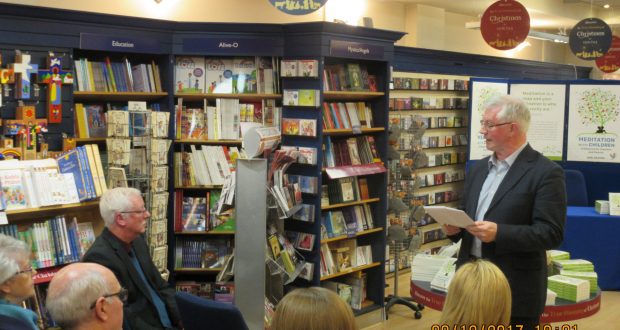 Michael O’Sullivan SJ, Director of the Spirituality Institute for Research and Education (SpIRE), and the MA in Applied Spirituality, launched Dr Noel Keating’s groundbreaking book, Meditation with Children – A Resource for Teachers and Parents, on 8 December, in Veritas bookshop, Abbey St, Dublin. Noel was a graduate of the  MA course in Applied Spirituality at All Hallows College, where it was a DCU award.

Speaking at the launch Michael noted that Professor Charles Taylor speaks about the sensibility of the current age as a sensibility that gives rise to an immanent frame of reference. “This secular frame, which is, perhaps, more a Western phenomenon, makes belief in God and what relates to God hard to hold,” said Michael, adding, “Noel’s research with children shows that already in childhood there is evidence of mystical spirituality at work in us. Giving spirituality in childhood opportunities to develop rather than seeing it as something for children to grow out of when they get sense, supposedly, can enable societies over time to transcend and transform the reductive sensibility of the secular age in the Western world.”

Michael also commended Noel’s ongoing work fostering meditation with children in schools throughout Ireland noting that there are now 32,000 children across 150 schools engaged in meditation in Ireland and the number continues to grow. “This spirituality development can be regarded as a silent revolution in our midst which will, hopefully, yield great benefits and fruits as time goes by,” he said, before adding, “This book would make a great Christmas present!”

Two of the social forces behind the publication of Noel’s book, according to Michael, are the MA in Applied Spirituality and the Second Vatican Council. “It is hard to see a book of this kind being researched and written without those influences.”

Referencing Vatican II Michael said that Meditating with Children is inspired by the Council’s articulation of the universal call to holiness. “Prior to that declaration, there was a tendency to see spirituality being confined to priests, and ‘religious’ in convents and monasteries,” said Michael. ” The call by Vatican II gave rise to much greater interest in the spiritual lives of everyone, at every stage and in every state. It is not surprising, therefore, to see now Noel as a married layman and the father of a family dedicating himself to meditation with children and to spirituality study, research, education, and practice,” he added.

Regarding the MA in Applied Spirituality Michael said it had its beginnings in the Milltown Institute and when it closed, he and Bernadette Flanagan worked to ensure it would continue at All Hallows. The course  is now delivered from Milltown Park again where not SpIRE hosts and supports the Waterford Institute of Technology MA. Noel is now also a member of the SpIRE Advisory Board. Two other members of that board are also PhD graduates in spirituality who worked with and Michael and Bernadette during their years at All Hallows College.

Noel did his post-graduate studies after taking early retirement as a primary school principal. He was awarded the Fr Thomas Fagan, CM medal for academic excellence across the six taught MA programmes in All Hallows. (The family of Fr. Charlie Davy, SJ are relatives of Fr Fagan and they sponsored the medal).

He started PhD studies after that in 2013 but had to move to Waterford Institute of Technology (WIT) to do so as All Hallows College rescinded the offers of PhD studies to those who had received them in view of what was to result in the eventual closure and sale of the college. He graduated with the first PhD in spirituality at WIT on Nov 1st, 2017. He was conferred in the same ceremony as the first cohort of MA in Applied Spirituality students from an Institute of Technology in Ireland.

At the time Noel was awarded the medal for academic excellence, Michael noted in the citation that it was Noel’s experience during his MA studies that spurred him on to start Ph.D work in the field of spirituality and childhood “which is a growing national and international focus of study in the field of spirituality studies.” He said at the time that Noel’s PhD research “would explore further the contours of the child’s experience of Christian meditation and in particular the fruits and benefits of such meditation practice for the wellbeing of primary school children,” adding that “given his proven academic abilities he could be expected to go on to make a very significant and professionally competent contribution to the study and practice of spirituality in Ireland. This book is evidence that he did just that.”