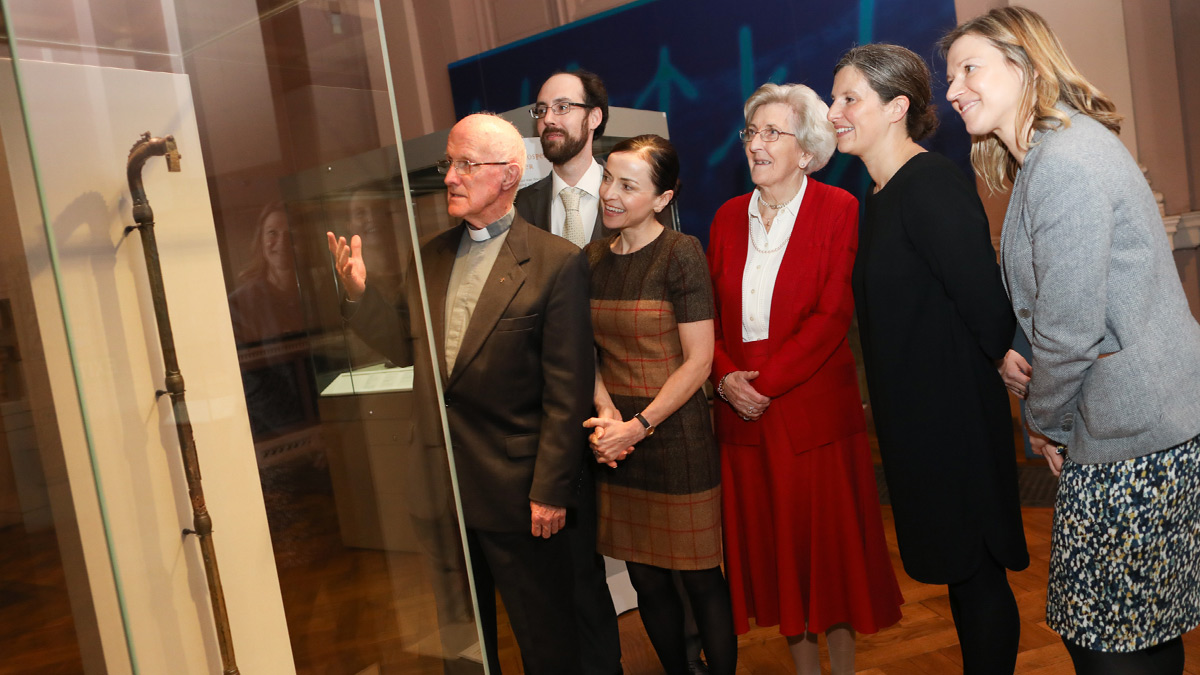 A thousand-year-old pastoral staff, the ‘Prosperous crozier’, which has been in the care of the Jesuits at Clongowes almost since it was discovered in a bog in 1839, has been given to the National Museum on indefinite loan. The public display of the crozier was launched at the museum on November 14.

Keeper of Irish Antiquities with the National Museum of Ireland, Maeve Sikora, said; “We are thrilled to welcome the Prosperous Crozier to the National Museum of Ireland. It is a unique and highly significant artefact that was made around 1,000 years ago… The Jesuits at Clongowes cared for this crozier for many years, and through its study, their students undoubtedly gained a deep appreciation of this nation’s wonderful heritage.”

Croziers take the form of a shepherd’s crook, symbolising the pastoral role of the Church in looking after its ‘flock’. Croziers were recognised as potent symbols of power when in use. Dating between the 9th and 11th centuries AD, at 1.34m in height the Prosperous Crozier is also the tallest of the surviving early medieval Irish croziers. An inscription on the crozier suggests that it was associated with St Mary’s Abbey in Dublin.

“It’s incredibly well-preserved,” according to University College Cork archaeologist Dr Griffin Murray. “The only flaw is that it was broken in two on purpose – possibly to conceal it. Otherwise it’s perfect.”

Fr Michael Sheil SJ, attending the launch on behalf of the Jesuits, said; “We are very fortunate in Clongowes to have had the Prosperous Crozier in our possession. It has been in the Community Archives for about 180 years. We are grateful to the National Museum for enabling us now to share it with the people of Ireland, for years to come. We hope that this treasure will be enjoyed and appreciated by all who come to see it. It is a reminder of our rich Christian heritage, providing a wonderful link to life in the Irish Church over a millennium ago.”

Chair of the Board of the National Museum of Ireland, Catherine Heaney, said: “As part of our rich medieval inheritance from monastic and Christian life in Ireland, the Prosperous Crozier links us back to the key role Ireland played as a place of learning and scholarship within Europe. It is timely, in this week of commemoration and when we look ahead to Brexit, that we also take the time to celebrate the richness of our history. Now to be displayed as part of the medieval exhibition, the Prosperous Crozier provides another stimulus for reflection on the richness which has come before us.”