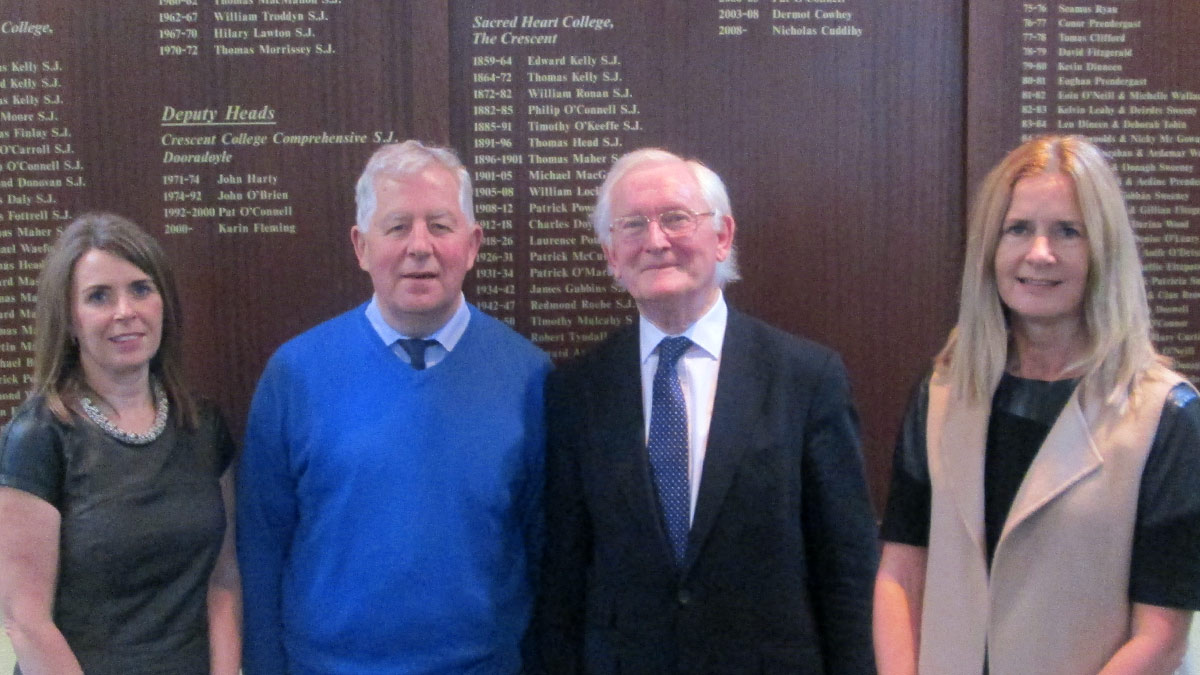 ‘Striving for excellence’ (magis) is one of the characteristics of a Jesuit education. Its meaning was teased out by Christy Kenneally at a recent staff day exploring the Jesuit ethos, in Crescent College Comphrensive SJ, Limerick.

The best-selling author borrowed from the title of Barton Geger SJ’s book, Smarter Not Harder to explore how ‘magis’ can mean working in a smarter way that is not necessarily a more difficult or labour intensive way. So he encouraged the staff to take enjoyment out of all the work they were doing, ensuring that the mornings and evenings of their days were of good quality. He also reminded them of the importance of relationships, reassuring them that without friction there is no spark!

Brid Dunne, Development Education Co-Ordinator with the Jesuit Mission Office, led a workshop focusing on the unequal starting point for countries in terms of economic and social development. The teachers were put back into the student’s places in the classroom and found themselves trading scissors and protractors for sheets of paper in order to enhance their country’s wealth. They were learning experientially what it is like for a developing country trying to compete in the marketplace with first world countries.

This followed a poignant presentation from Jen Condon who had just returned from Ocer Campion, a Jesuit School in Uganda. There, she and her colleagues from other Jesuit colleges nationally, led a workshop for staff on the topic of ‘Faith that does justice’, another characteristic of Jesuit education. The process of engagement with Ocer began last year when science teacher Donal Ryan worked there during the Easter Break and it will continue next Easter when a further five colleagues will return to the Jesuit school in Uganda.

Fr. Eamonn Fitzgibbon, co-ordinator of the Limerick Synod due to take place in April 2016, also addressed the staff. He outlined how over the last eighteen months he has worked with Bishop Leahy and many delegates from every section of Limerick life, engaging in a listening process with parishioners in the city. The agenda for the Synod in April is based on what emerged from this consultation process which is largely lay led and lay driven.

He detailed the six topics that have emerged: Community; Family; New Models of Leadership; Liturgy and Life; Youth; Faith Formation and Education. This gave rise to an animated question and answers Session with between Eamonn and those present.

The Crescent Staff day ended with teachers being offered opportunities to engage further in exploring the Jesuit Ethos in informative and formative ways. Grainne Delaney, co-ordinator of Ignatian Ethos, encouraged staff to make a journey ‘in the footsteps of St. Ignatius,’ by going on a retreat-pilgrimage to his birthplace in Loyola, Northern Spain next March. It’s organised by the Irish Jesuit Province and a number of staff members have already walked these footsteps to date, resulting in, according to Grainne, “ a more convincing witness to the Spirituality of St. Ignatius.”

Deirdre O’ Sullivan, Irish teacher, agreed that the Pilgrimage was certainly a ‘retreat’ experience and said that the three separate days focusing on St. Ignatius’ birthplace, pilgrimage, and the city of Pamplona, had elements of the unexpected.

We could be heroes