Divining the future at GC36 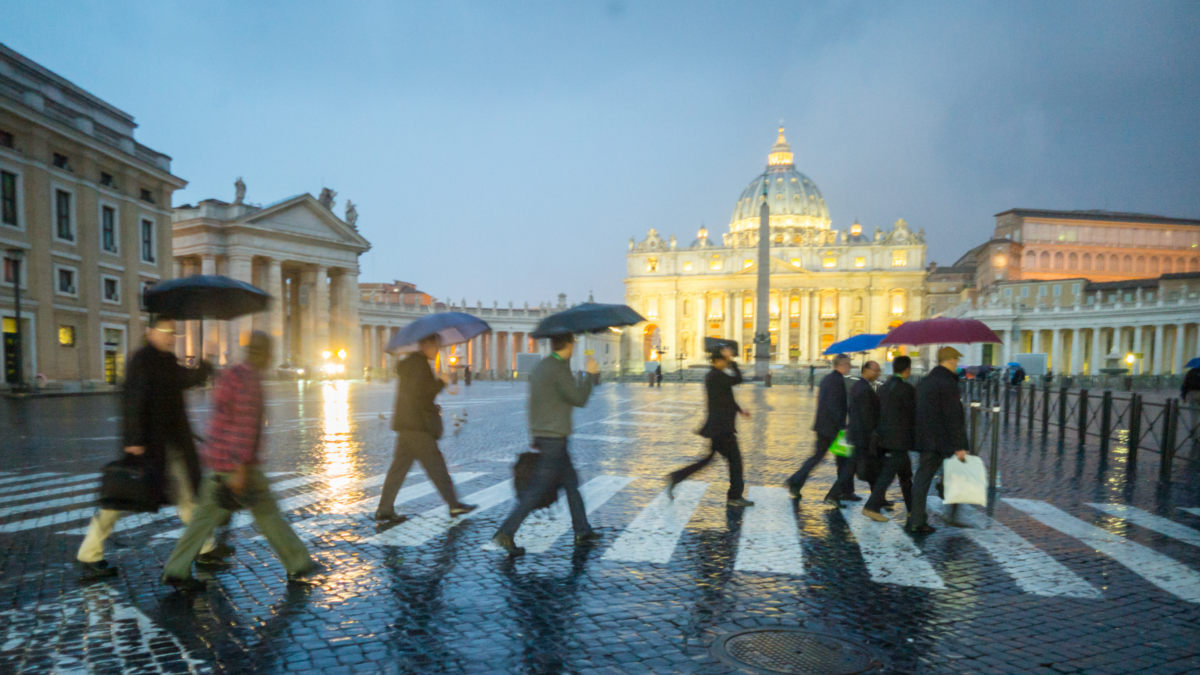 Irish Jesuit Provincial Tom Layden was one of the many Jesuit delegates who, on a rain soaked morning in Rome, went through the Holy Door Year of Mercy before celebrating mass on the sixth day of GC36, their General Congregation. John Guiney SJ, the second Irish Jesuit delegate in Rome, says the last three days have been intense with 215 delegates getting to know one another, discussing wide ranging topics  from community life to ecology and preparing for the murmuratio, the process of prayerful conversation between members about possible candidates for the post of Father General.

The symbol of the door for Jesuits at this time was apposite. As one delegate noted, “We are being invited to take a step forward and leave something behind.” They have accepted the resignation of one leader and will elect another soon. They are also reviewing their role in the world today in the light of the Gospel and their own Ignatian charism.

Fr. Bienvenido Nebres SJ, the oldest member of the Congregation, was the main celebrant at morning Mass in St Peter’s Basilica. In a short homily, the celebrant explored what Peter’s experience with Jesus had to say to Jesuits as companions of Jesus. Making a reference to the Basilica dedicated to St Peter, he described the scene of the Saint’s denial of Jesus and of his profound grieving after his fault. He went on to relate the story of breakfast on the shore of the lake, when Jesus, after his resurrection, invites his disciples to share a meal with him. He suggested to those present that the inspiration for Jesuits from these scenes was Jesus’ love for his disciples. And he said they were invited to respond to Jesus as Peter did. “Lord, you know everything, you know that I love you.”

The process of electing a new leader of the Jesuits worldwide was to begin on Friday but after discussion and discernment it was decided to postpone the deliberations until next Monday in order to give delegates,”A chance to savour what has been shared, catch their breath and continue to meet, greet and connect with one another,” says John Guiney.

During the week delegates focused on the challenges facing the Society of Jesus into the future and therefore the  kind of gifts a new Father General might need in order to address those challenges. According to John, some of the tasks ahead as envisaged by delegates included; the deepening the Ignatian legacy of  the Spiritual exercises in each member and the sharing of it with others; the consolidation of the universal and local mission of the Society of Jesus; being present to the migrant and refugee crisis in the world today, and strengthening the intellectual work of the society in the service of the church and the world.

In this context it was acknowledged that the new Father General would need to be a man of God, who loves the Church, the Society of Jesus, and the poor. And who can continue in the path of Pope Francis who shows by his words and actions how to be Church today.

Tomorrow, Saturday 8 October, all the delegates will concelebrate Mass in St Peter’s Basilica and the murmuratio will begin on Monday 10 October.

‘Remember, give thanks, be surprised’.

The gift of darkness

‘Be ecclesial, not clerical,’ Pope tell Jesuits at GC36