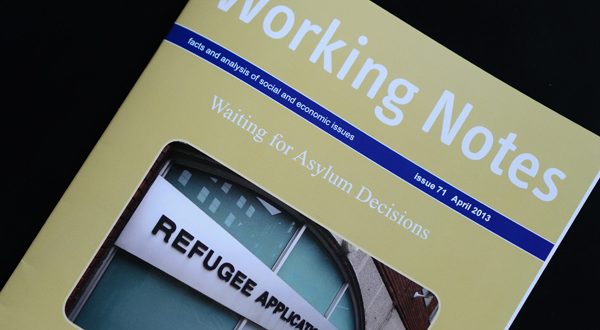 The seriousness of the environmental crisis facing the Earth is the theme of the October 2013 issue of Working Notes, the journal of the Jesuit Centre for Faith and Justice. This is the first time an issue of the journal has beenentirely devoted to environmental questions, and the articles draw attention to many stark examples of environmental degradation, for example:

The most recent report of the Intergovernmental Panel on Climate Change, which was published September 2013, is ‘unequivocal’ that warming of the climate system is occurring and that human activity is the dominant cause of this. The Report warns that unless current levels of emissions are drastically reduced, global warming will continue, so that by the end of this century the ‘danger threshold’ of a rise in global temperatures of 2⁰C above pre-industrial levels is likely to be reached.

Ireland is one of the world’s top greenhouse gas polluters on a per capita basis. Were it not for the reduction in economic activity resulting from the downturn, Ireland would have missed its Kyoto target for reducing greenhouse gas emissions; currently, it is not on target to meet a reduction of 20% in emissions relative to 2005 levels, to which it is committed under an EU target for 2020.

Many previously common Irish farmland birds, including the curlew, lapwing,  redshank and snipe, have suffered drastic declines in population since the 1970s; unless there is action to halt the current rate of decline many breeds are in danger of becoming extinct.

A 2010 report showed that only in the case of around half of Irish rivers and lakes was the water quality of satisfactory standard.

On a more positive note, Working Notes includes descriptions of innovative projects being undertaken by Church groups in Ireland in order to raise awareness of environmental questions and show how practical measures to protect the environment can be put in place by individuals and communities. In the Editorial, attention is drawn to the emphasis given by Pope Francis to the need for everyone to respect and protect the environment. In his homily at the Mass to mark the formal beginning of his papal ministry, Francis spoke of the importance of the vocation of “protecting all creation [and] the beauty of the created world”, and added that this is not a vocation which involves only Christians, but rather one that arises simply from being human, and so involves everyone. Even in his choice of name, of course, the new Pope was reflecting his environmental concern, choosing to be called after St Francis of Assisi, who is the patron of those who promote ecology.

The Editorial concludes with a thought-provoking quotation from the former environmental advisor to President Carter and President Clinton, James Gustave Speth: “I used to think that the top global environmental problems were biodiversity loss, ecosystem collapse and climate change. I thought that with thirty years of good science we could address these problems, but I was wrong. The top environmental problems are selfishness, greed and apathy, and to deal with these we need a spiritual and cultural transformation and we scientists don’t know how to do that.”
Copies of Working Notes are available from Jesuit Centre for Faith and Justice: Telephone: 01 855 6814 or email: [email protected] The journal is also available on the web: http://www.workingnotes.ie/