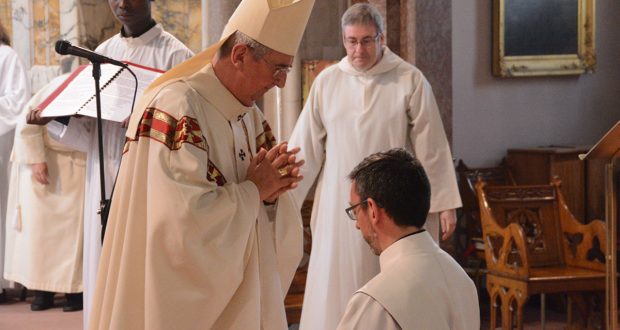 Irish Jesuit Eddie Cosgrove, who hails from Dromahair, Co. Leitrim, was ordained today, Sunday 14 May, by His Grace Diarmuid Martin, Archbishop of Dublin. The ordination mass took place in the chapel of Milltown Park in Dublin.

On the previous day, Saturday 13 May, Archbishop Martin assisted at another great Jesuit event in Dublin, namely the beatification of Fr John Sullivan SJ in Gardiner Street Church. In his homily at Fr Cosgrove’s ordination he linked the two events. He noted that the two most fundamental dimensions of the priestly life of Blessed John Sullivan were his practice of poverty and of obedience. “Edward,” he continued, addressing the new ordinand directly, “these are also two dimensions of your future life as a Jesuit priest which you must always allow to be dominant in your life”.

Archbishop Martin paid special attention to the need for poverty. He again cited the example of the new Blessed: “I was struck by the fact that one of the first gestures of John Sullivan’s in his growing commitment to poverty was a simple concrete one: he got rid go his expensive clothing and any worldly ostentation and opted for a life of radical simplicity.”

The archbishop stressed that a life of holiness requires more than a once-off commitment. Referring again to Blessed John Sullivan, he noted that the key to his holiness lay in his “continual conversion in his life of poverty and in a life of configuration to Christ through prayer.”

This sense of the need for continual reform in the Church also showed through in the striking conclusion to Archbishop Martin’s homily. “Edward,” he said, “you become a priest at a new time in the history of the Irish Church. My generation may seem to be handing your generation a weaker and more fragile Church, fewer in numbers, weakened by scandal, less credible due to our life style. We look to your generation now to call the Church to renewal and we pray that your ministry will be marked by an ever closer configuration to Jesus Christ and a style of life and spirituality appropriate to your calling.”

At the end of mass, Dr Martin returned once more to the theme of poverty. He reminded Eddie that “poverty in a priest never fails to touch hearts, but arrogance alienates”.

A great number of the Jesuits in the Irish province were in attendance. Perhaps the most moving part of the ceremony was when, after the anointing and the laying on of hands by the Archbishop, all the other Jesuit priests were invited to come forward and lay hands on the new ordinand.

At the end of the ceremony, Irish Jesuit Provincial, Leonard Moloney, thanked Archbishop Martin for all his availability and support for the Jesuits in his diocese, and he made special reference to the beatification ceremony on 13 May.

Many of the attendants at the ordination, including Eddie’s parents, brother and sisters, received a blessing at the end. The whole weekend, it could be said, has been a time of blessings for the Irish Jesuit province. 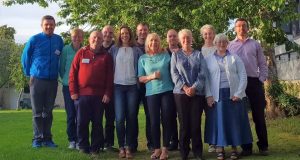