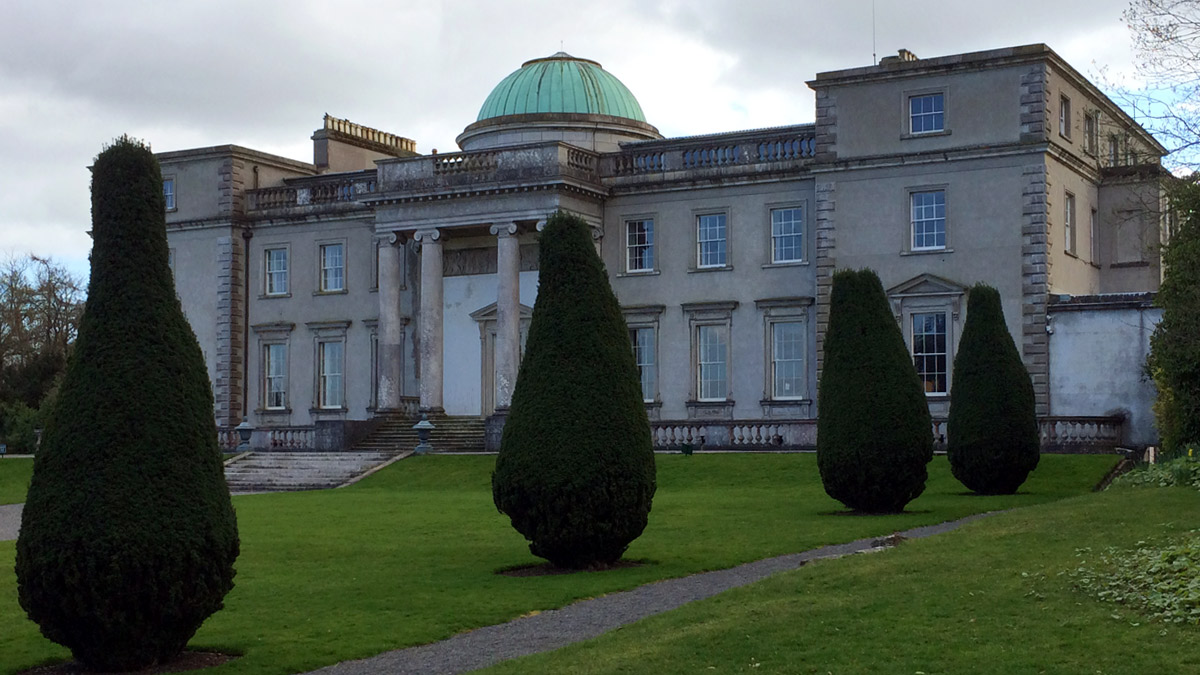 A group of Jesuits, colleagues and friends spent a memorable day in Emo Court on Wednesday, 17 October, on their annual trip organised by Conor Harper SJ and Brother John Adams SJ. The magnificent former Jesuit novitiate is situated south of Portarlington, just a few kilometers off the Dublin-Limerick road (the M7).

Emo Court was once an stately Anglo-Irish home, owned by the Earl of Portarlington who abandoned it in 1920, due to financial difficulties. It was purchased by the Jesuits for £5000 in 1930, and sold to Major Cholmeley Harrison for £46,000 in 1969. Major Harrison spent over seven million in restoring it and then gifted it to the Irish nation which now, through the OPW, maintains it splendidly. The grounds contain the estate house and 280 acres of woodland and parkland.

The Jesuit group were guests of the OPW who gave them a truly warm welcome, according to Conor Harper SJ. “The staff were there to greet us and look after us. They fed us, and took us to special parts of the building not normally accessible. They were most helpful and we all felt really at home.”

The building is beautifully restored to a ‘former glory’ it certainly did not have when Henry Grant SJ was a novice there. He was one of the group who made the trip, and despite its now more elegant appearance, it evoked many happy memories for Henry. “I remember well arriving in the Emo novitiate  from Buncrana in Donegal, on 6 Sept 1952, along with Paul Brazil SJ, Paddy Tyrrell SJ and others, “says Henry. “It was 65 years ago and much has changed in that time,” says Henry. “The house is beautiful now, a wonderful job has been done on the restoration. We didn’t have that luxury in our day!”

They did have the grounds and the gardens and the lake though. “Damage wrought to the gardens by hurricane Ophelia a few days earlier meant we couldn’t get access to the gardens this time, but we visited the grounds.” Inside the house they toured the rooms that have now become an exhibition centre for the photos of world-renowned Jesuit photographer Fr Frank Browne. He too went to Emo and took many photos there. Another well known Jesuit, recently beatified Fr John Sullivan SJ, was the first person to give a retreat in the house, in 1932.

Not only did going back to Emo this year evoke memories of Henry’s time there, it also caused him to reflect on how his life has unfolded since then. “In the last three months I’ve been reading Charles Taylor’s seminal work A Secular Age, and it made me reflect on the huge world-wide developments over the decades.  So much has changed for people in terms of culture and social organization. And the Jesuits have gone through significant changes also.”

Like the author Benedict Kiely who was once a novice in Emo, and wrote a novel inspired by his time there, There Was an Ancient House, Henry began to reflect on what has happened to him personally since his novice days. When he first arrived he was, “fresh and eager, having been a border in St Columb’s college in Derry, availing of newly instituted free education.” He says it was a great experience as the staff were full of enthusiasm, relishing being able to teach new courses. “I loved reading literature and other subjects. And that experience in Derry left me with an abiding interest in the North. So when the Troubles broke out I wanted to work in the area of peace and reconciliation, and the Jesuits helped me do that. I went to the US to study, and got a doctorate that gave me credibility in the conflict resolution I undertook.”

That training also helped him in another field of work, facilitating religious communities and congregations around Ireland to implement significant change in the years after Vatican 11.

Henry worked in the North until the mid-80’s, when he then went on mission to Paraguay. “I was there for 14 years”, he said, “and I started a social movement with the local people, helping them resolve conflicts and social justice issues in their local communities.”  He returned to Ireland in 2003 where he has been working with the Jesuit University Support and Training (JUST) ever since. In 2016 he celebrated his 50th year a a Jesuit.

The group set off from Milltown Park shortly after 11am on a typical Irish autumn day, and it was around 9pm when they got home. ” It was a long and lovely day and I’m grateful to everyone for making it so worthwhile,” says Henry, who has many poignant memories to ponder in the winter months ahead.

Finding God in the Mess

The life of an Irish francophile, Conor Harper, SJ