‘Every number has a face’ 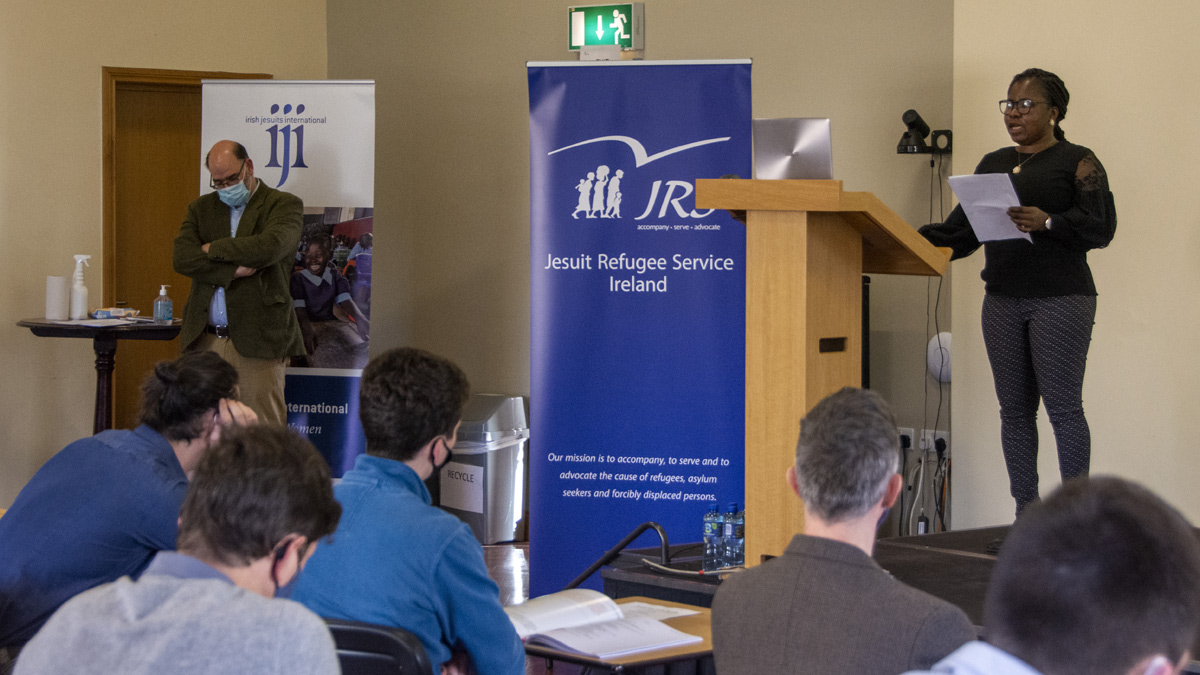 “UNHCR (the UN refugee agency) reports that 82.4 million people were forcibly displaced in 2020, and this report never lets us forget that every single number has a face.” So said Bishop Alan McGuckian SJ, speaking at the launch on Wednesday, 3 November 2021, of the Jesuit Refugee Service Ireland’s (JRS Ireland) latest report, Protection with Dignity: A Humane Response to Global Forced Displacement. The launch took place in the Arrupe Room, Milltown Park, with people from Belgium and as far away as Thailand also in attendance. It was live-streamed also, so many others also took part online.

The report highlights the latest trends in global forced displacement and the erosion of protections for migrants, with the creeping return of ‘fortress Europe’. It calls for urgent action at a global, regional and local level. “Doing nothing in the face of this global threat to the safety and wellbeing of people forcibly displaced by climate change and conflict is not an option,” according to Bishop McGuckian, who is chair of the Irish Bishop’s Council for Justice and Peace. “Those who have more should do more,” he said, adding that “it is in our DNA as Christians, when we are true to ourselves, to respond generously and openly to those who arrive on our shores in search of refuge and protection”.

One of those people who arrived here, Folashade, shared her story with those present. The young mother of two spoke of her experience in a Direct Provision centre living in one room with her two young children.  “For many years my children and I have grown up surrounded by the same four walls. They know nothing else.” She said it was particularly difficult for them all during Covid-19 lockdown, when they could go nowhere. She spent many sleepless nights hearing again in her head her children’s cries from during the day. Because of the housing crisis, Folashade and her children are still living in Direct Provision accommodation despite having secured refugee status. UNHCR says that almost half (42%) of forcibly displaced people are boys and girls under the age of 18.

Speaking at the launch, Eugene Quinn, Director of JRS Ireland, said that “It is vital in the context of a national housing crisis that the accommodation needs of resettled persons are ring-fenced under the government’s Housing for All policy”.

Protection with Dignity makes 15 recommendations that would ensure a more humane response to displaced people. According to David Moriarty, Assistant Director of JRS Ireland, who also spoke at the launch, the recommendations prioritise the equal sharing of responsibility for migrants. “They must be received with generosity and their dignity preserved among countries across the world,” he said. And whilst welcoming Ireland’s commitment to resettle almost 3,000 displaced persons by 2023 (during a three-year period beginning 2020) he noted that this figure falls short of the 5,000 resettlement places which are needed to meet the state’s fair share of the global resettlement project.

Aoife Harte, Senior External Relations Assistant with UNHCR, and Claudia Bonamini, Policy and Advocacy Officer with JRS Europe, also spoke at the launch. UNHCR has reported record levels of displaced people in 2020. The 82.4 million estimated is double the numbers displaced globally a decade earlier. Aoife Harte explained how high profile crises in Afghanistan and Tigray and less visible conflicts in Yemen and Venezuela have led to ever greater numbers of men, women and children fleeing their homes in search of safety and protection.

The Irish Jesuit Provincial, Leonard Moloney SJ, welcomed those present in person and online to the launch. He commended JRS Ireland and JRS Europe, saying their work was a priority not just of the Irish Province but of Fr Arturo Sosa SJ, the leader of the Jesuits worldwide. “Two of Father General’s four Universal Apostolic preferences, in particular, are addressed by the work of the Jesuit Refugee Service,” Fr Moloney said, namely ‘Walking with the Excluded’, and ‘Caring for Our Common Home’. And he committed the Irish Province to the ongoing support of the JRS and its work.

Protection with Dignity contains a global call to action, according to Eugene Quinn, not just directed at nation-states but also at civil society, faith-based groups, parishes, and individuals. In particular, JRS Ireland would like to see an increase in parishes sponsoring displaced families and housing and caring for them within their communities. “Community sponsorship is a valuable emerging pathway to protection that can provide capacity in addition to the state’s commitment to meet the accommodation and support needs of resettled refugees and vulnerable forced migrants arriving in Ireland,” he concluded.

People who suffer from depression

JRS report – Ireland must do more