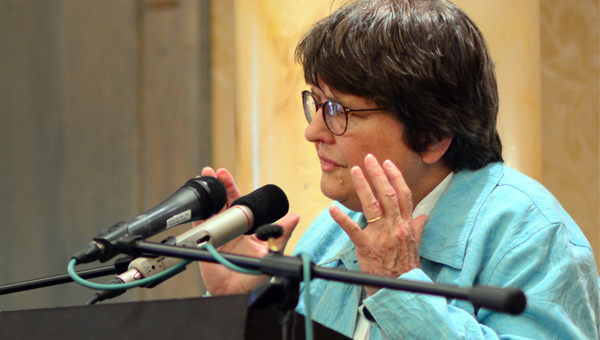 Sr Helen Prejean gave an inspiring address to over 200 people who attended the Voices of Hope: Echoes of the Divine conference in Galway on Friday 25 and Saturday 26 October. The ‘death penalty’ nun played by Susan Sarandon in the oscar winning film Dead Man Walking, spoke of her conversion to being with the poor and accompanying prisoners on death row as a pivotal moment of grace in her life. She encouraged those present to “harden not their hearts but listen deeply for the call from Jesus in their own lives.” God is the one who interrupts, she said, so be alert for His interruptions, which may well take you on a journey, one step at a time. “That’s how he worked with me,” she quipped, “so I call Him sneaky Jesus.” Listen here to the full talk.

She was emphatic that life wasn’t about sitting around thinking but about acting; “A good heart if you are removed from the poor, isn’t enough. The first step is the beginning of the path”.

Quoting from St Bonaventure she said “Ask not for the understanding; ask for the fire.”  She said she had watched men die by fire, tied to a chair with an electric current charged through them.  This is what drives her to work for the abolition of the death penalty every day of her life, filled with the fire of the Spirit and charged with grace.

To those present  Sr Helen gave both understanding and fire when she spoke of the families of those who were victims of the men she worked with. She acknowledged fully that she had made huge mistakes at first by not contacting them in any way, fearing that they would want nothing to do with her.

She spoke movingly of Lloyd LeBlanc, whose 17-year-old son was murdered by the two brothers she was accompanying as spiritual director. He challenged her about why she had never come to talk to him saying he needed her support especially to stand up against those in his community who felt he was letting his only child down by not demanding the death penalty for his killers.

That man taught her more about forgiveness than any books on theology or spirituality ever could. He even went to visit the mother of the two boys who had killed his son even though the rest of the community had rejected her. Warning about the corrosive power of bitterness and revenge she quoted the Native American saying: ‘If you set out on the road of revenge you better dig two graves’.

She pointed out how Lloyd LeBlanc had gone against the prevailing culture and that it was really important that we reflected on and challenged our culture when it fell way short of the message of Jesus to love , forgive and seek justice especially  for the voiceless.

In his talk Gerry O’Hanlon SJ, theologian from the Jesuit Centre for faith and Justice explored the culture we have inherited and the major currents that have shaped it. He said Christians and Christianity today face significant challenges. “Can we engage in cultural discernment and perhaps learn from our culture as well as confront it?” And examining the state of the Church today he asked ,  “Can the church engage in that conversation  on culture and can the Church reflect on and challenge itself as it does the prevailing  culture?  He also outlined how Pope Francis’ papacy (which he described as ‘gentle subversion’) might be a great help to people in both endeavours.

Like Sr Helen he challenged those present to action , like joining groups such as the ACI (Association of Catholics in Ireland) who are actively working to implement the vision of Vatican II that has seemed to be stalled for some time.

Former Mountjoy prison governor John Lonergan also stressed the need for action in his opening talk on Friday evening. He said small acts of kindness often cost very little but could mean an awful lot, especially to people like those he had worked with down the years, prisoners who had been often dealt a tough hand in a life that was starved of kindness and love.

He stressed the common humanity of all people, saying if he had endured the suffering of many of the prisoners he met, he often thought he would have responded in a much worse and possibly more violent manner than they did.

“I have never met an ‘all bad’ person”, he said, and I’ve met thousands.  “In fact what I want to say to most of them is ‘You’re brilliant to be as good as you are considering what you’ve been through’”.

This theme of the recognition of our common humanity as a key aspect of hope,  was recurrent amongst all the speakers including Geraldine O’ Gara, a recently retired GP from Galway who worked in a multi-cultural, inner city practice in Birmingham for over 20 years. She recalled what it was like for the Irish there during the troubles. “We were ‘other’ and once people experience themselves as ‘other’, then that’s a breeding ground for radicalisation, alienation and violence.”

When the Pakistani population replaced the Irish numberwise in her area, she recalled the challenges she faced.” I was a feminist and I had to come to terms with ‘the women of the veil’, as I called them.”  She had to develop new sensitivities.

One older man, who presented to her with serious symptoms which proved to have no physical basis, eventually confided to her that he was afraid his grandson was being ‘radicalised’ by a local fundamentalist Muslim cleric.  “We had to deal with that with deep respect and understanding “. Her consultation room became, in her  own words, “A safe sacred space”. It was a place of story sharing and hope especially for the poor, no matter what their religious affiliation or ethnic background.

Peppered throughout the Saturday were the contributions of local ‘voices of hope’. Young and old, male and female, coming from different perspectives were asked the questions, ‘who or what gives you hope and why?’ They were invited to give brief summary answers to the questions. And the variety of responses was uplifting.

One contributor, Eamonn McGuinness, a father of teenagers and young adults, all of whom attended the Jes (Coláiste Iognáid), quoted a line he once heard that had become his beacon of hope: “All the well being of Christianity and the world depends on the proper education of our youth”.

‘Learner and wanderer’ (her own description) and teacher of senior infants, Deirdre Kelly, said she had lost hope that she would ever really give her pupils the grounding in and love of reading and writing that they needed. The struggle was uphill, but one day one of her young boys came in with a short story about a cat and the king which he’d done all by himself and off his own bat. Her hope was restored in that one small breakthrough.

Margaret O’Riada and traveller Julila Sweeney, both work at the Galway Traveller Movement and in a show of solidarity they spoke from the podium together, energising those present with their sense of  humour and commitment.

The conference ,organised by the Jesuit Centre for Spirituality and Culture as the final celebration marking 150 years of ‘the Jes in Galway, began on the Friday evening with a  PowerPoint reflection entitled ‘A Glimpse of the Essence’ by Joe Killick.

It featured many memorable photographs including one of the twisted and charred bodies of US soldiers preserved like a macabre sculpture. This disturbing image was juxtaposed with photos of stunning sunsets, and hedgerow primroses because, according to Joe, “Beauty has the capacity to shine a light into that darkness and awaken us to a glimpse of the essence of the Divine”

As a conclusion, teacher Mary Connolly asked all present to consider a number of questions the first of which was; “What line or phrase heard over the two day conference has struck you most?”

This elicited a moving response from almost all present who had clearly been touched in many different ways.  And they were left to go home reflecting on a number of questions that might lead from thought to action, from ‘voice’ to vocation’. “Where are the voices of hope in my life?”, they were asked. “What is the voice I need to listen to? What is the interruption that may lead me to speak up, speak out and be a voice of hope?”

This final celebratory event of Jes 150 concluded with a dinner in the Galway Bay Hotel where the conference was held. Just before dinner, former pupils of Colaiste Iognaid under their teacher/director Carl Hessian, serenaded those present with some wonderful close harmony singing including the beautiful “Hallelujah’ by Leonard Cohen.  Hallelujah indeed – a fitting end to a special year for the Jesuits and their-co-workers, friends and colleagues in Galway.

Dermot Roantree of Irish Jesuit Communciations took many photographs during the conference. You can view them here. Please note that a good number of other images will be uploaded to the same Flickr set shortly. Also that high resolution versions of all these images, suitable for printing as 7″x5″ shots, are available from Dermot ([email protected]). Éist Productions recorded the talks and the plenary session on the Saturday and you can purchase the whole set of CDs from Paul Daly, Éist, price €25.