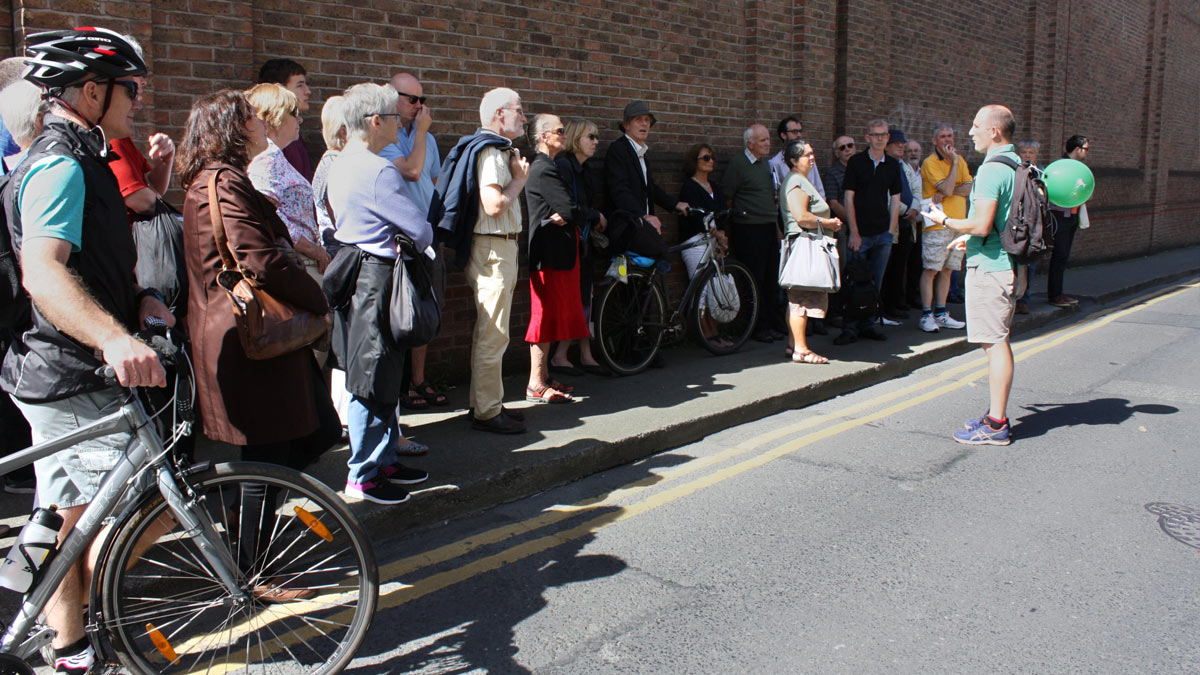 As part of this year’s Heritage Week, Damien Burke, Assistant Archivist of the Irish Jesuit Archives, gave a number of walking tours focusing on sites of Jesuit history on the north-side of Dublin. Over forty individuals followed him around lesser known areas of Jesuit habitation which dated from 1685 to 1816. Among these was the first Jesuit residence on Dublin’s north-side, on Mass Lane, now Chancery Place, which opened in the 1680s. Also the Jesuit Chapel on Mary’s Lane, known as St Michan’s, where they worked from around the 1720s.

Damien told the attendants about the Jesuit connection with the famous statue of Our Lady of Dublin currently in the Carmelite Church in Whitefriar St. It is gothic in style, possibly German, and thought to date from the 16th century. It has been suggested that the sculptor might have been a student of Albrecht Durer.

The statue was originally erected in St Mary’s Abbey (Cistercian), but this abbey was suppressed by Henry VIII in 1544. In order to save the statue, which was due to be destroyed, someone burned the back of it and had it hollowed out. It could then be taken down quickly, when there was danger of detection, and turned over so that it appeared to be a horse trough. When the Jesuits acquired the statue, sometime in the early 1700s, they erected it beside the high altar in St Michan’s Parish on Mary’s Lane.

When the Society was suppressed in 1773 the Jesuits working in Mary’s Lane mostly continued working in the parish, but now as diocesan priests. And after the restoration in 1814 the Jesuits moved their pastoral work to Hardwicke Street, behind what is now Belvedere College. Sometime between these dates the statue went missing. It next appeared in a pawn shop in Capel Street, and it was there that Carmelite Fr John Spratt found and purchased it in 1824. It was formally erected in its own shrine in Whitefriar St in 1915, and it still inspires lively devotion there today.

The post-suppression Jesuits moved to Hardwicke Street, nearer to the present day Jesuit-hub around Upper Gardiner Street, where they opened a chapel in 1816. On the Sunday of Heritage Week, a guided walking tour combined with a private tour of St Francis Xavier’s Church, Upper Gardiner Street, was given by Elizabeth Pilkington, sister of Gerry Clarke SJ, PP of Gardiner Street parish, and a professional tour guide.

‘A schoolman all his Jesuit life’

Death of a great Jesuit and historian

Death of a great Jesuit and historian

A sparrow to fall