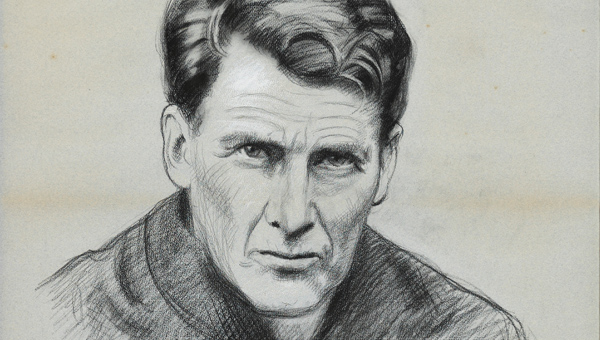 A new website in honour of the renowned and saintly Jesuit Fr John Sullivan SJ was launched at the annual birthday anniversary mass in Clongowes on Sunday 11 May. Many hundreds of people from all over Ireland packed the two chapels in the college and just before mass began Pat Coyle, Director of Irish Jesuit Communications spoke about the new venture.

She thanked the family who had given a very generous donation for the building of the website saying they were present in the congregation but wanted to remain anonymous. She also paid tribute to the hard work and expertise of her colleague Dermot Roantree and the staff of getonline.ie  – a one time Jesuit venture – who built the site.

The website features photos and videos – old and new –  on the life of John Sullivan SJ and devotion to him. Archbishop Michael Jackson of the Church of Ireland speaks about the ecumenical importance of Fr John who was raised in the protestant tradition of his father and attended Portora High School in Enniskillen.

In a series of podcasts interviews Pat Coyle visits the John Sullivan archive in Clongowes where Vice Postulator for his canonisation cause Conor Harper SJ relates the stories of various artefacts there including a book mark made from Fr John’s first curls – the only first class relic there. She also speaks to Bernard McGuckian SJ who recounts stories of the miracles and cures associated with the ‘Servant of God’.

The prayer room on the site is simple, featuring the novena prayer accompanied by a moving instrumental – ‘The Father John Sullivan Air ‘, composed by pianist and songwriter Eamon Keane.
Visitors to the site can also submit a prayer request or acknowledge favours received through the intercession of the Jesuit whom the boys he taught called ‘The Saint’.

Fr Willie Reynolds SJ was celebrant at the mass and the homily was preached by Conor Harper SJ. Fr Harper said he had no doubt that quite a number of the people who had come to the mass were anxious or worried, in bad health or had friends or family members who were unwell. It’s in these circumstances that we pray with renewed vigour to Fr John who mediated the presence of Christ in so many lives. ”That’s what it’s all about,” he said; “John Sullivan is not somebody who has God’s ear in some special way and gets the job done like a politician who has a special ‘in’ with the powers-that-be. No. John Sullivan points to God and puts us in touch with the One who can get the job done.”

After Mass there was a special anointing for all who wanted it and a blessing with John Sullivan’s cross. It was a moving experience for all as ‘The Father John Sullivan Air’ filled the chapel along with the heartfelt prayer of anointing for sick and able-bodied alike.

‘Pray with the pigs’