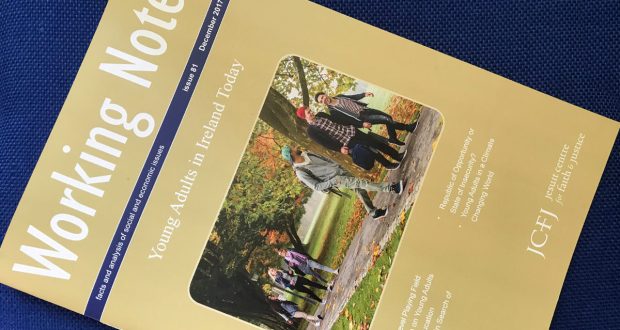 Is our future in safe hands?

The life of young adults in Ireland today is the theme of the latest edition of Working Notes, the journal for the Jesuit Centre for Faith and Justice (JCFJ). There are currently more than 400,000 young men and women aged between 18 and 24 in Ireland. Working Notes reflects on their lives from a variety of perspectives, including mental health, education or the lack of it, climate change, and social justice.

The number one health concern for young adults in Ireland is mental health. In his article in Working Notes, Dr Tony Bates, of the youth organisation Jigsaw, says  that “almost 75% of all serious adult mental health disorders are present to a significant degree by 18 years old.” He notes, however, that these problems can be missed as the person affected may hide behind the appearance of an indifferent or problem-free approach to life. The biggest protective factor in the life of a young person, Dr Bates says, is “the presence of at least ‘One Good Adult’ who knows them personally, believes in them, and is available to them”. He also emphasises the importance of providing adequate mental health services and support for young adults, so that they can flourish.

“Climate change is one of the defining challenges of our time,” according to JCFJ Environmental Justice Officer Catherine Devitt, who explores how the imminent global threats of climate change and the destruction of the environment will affect the future of Ireland’s young adults. She stresses the importance of education and policy-making in engaging with young people so that the worst effects of climate change might be staved off.

The theme of education continues in an article by Kevin O’Higgins SJ, a mentor and teacher at the Jesuit University Support and Training (JUST) initiative in Ballymun. JUST is an organisation that provides people, in one of the most marginalised communities in Dublin, with the supports they need to overcome the obstacles that block their road to third-level education. In his article ‘A Very Unlevel Playing Field’ he decries the societal inequality that sees some young adults effectively denied any opportunity to pursue higher education – an education which could break the cycle of poverty that threatens to haunt their whole lives.

The final article in this edition, by James Doorley, highlights the fact that young adults in Ireland are struggling to find employment, and are often faced with jobs that provide low pay and precarious conditions. They need a commitment from the Government to find work that provides them with a decent salary and quality of life.

Catherine Devitt’s is the leading article is this edition of Working Notes. She says that the young adults of Ireland are the ones who will endure the impact of global warming and environmental decline in their lifetime, and considers the challenges ahead for them as we move towards a low-carbon society.

Climate change affects everybody, she notes, “but it is young adults who will bear the heaviest burden as they mature in a very different world to that of their parents.” She says that young adults are vital to the process of Ireland moving towards a sustainable economy and environment in a climate changing world and that “education is key to empower them with the tools to understand both the issues and the solution. It will also equip young adults with the skills needed to enable them to engage in dialogue with Governmental groups, climate action groups and others who are active in the environmental sphere.”

Climate change is a fact, she says, and that places a moral imperative on states to protect the current generation and future citizens from preventable harm. She believes that a key to allaying its worst effects is to understand the scale of the transformation that is required here and globally. She says that Ireland is a high emitter of greenhouse gases, considering its relatively small population because “there has been a failure at Government level to take consistent, ambitious action to implement climate policy.” Despite the State’s admission that climate change is ‘the global challenge of our generation’ and the ratification of the Paris Agreement in 2016, emissions continue to rise, across all sectors, she says.

In order to achieve the policy objective for 2050, it is calculated that Ireland needs to reduce combined emissions from energy, transport, buildings and agriculture by an incredible 80 per cent. “This transition to a low carbon society will have huge ramifications, which will be felt keenly by those who are presently young adults, but a failure to do so is threatening their human rights and placing them in danger,” according to Catherine. She says that Ireland needs to honour its global agreements, and by implementing policy, set in motion the considerable social and economic changes needed to achieve its objectives and mitigate the worst effects of extreme climate change.

Pope Francis’s ecological encyclical Laudato Sí is cited in Catherine’s article as an inspiration for the move towards environmental justice. In it, he applauds young people for having ‘a new ecological sensitivity and a generous spirit’ and ‘making admirable efforts to protect the environment’. “It is in their hands that the future lies – and it is primarily their future,” says Catherine. 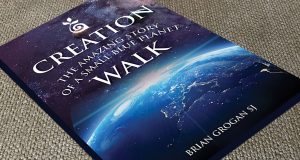 An Irish perspective on Laudato Si’