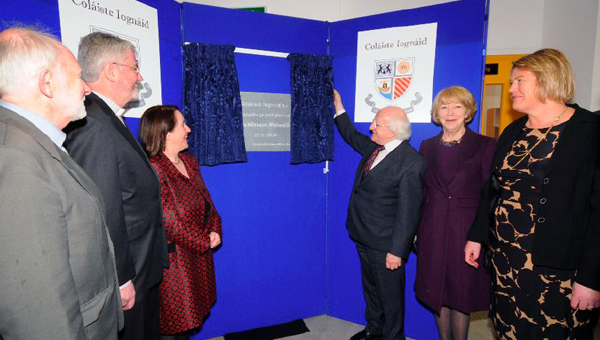 President Michael D Higgins and his wife Sabina were guests of honour at the official opening of the newly refurbished buildings in Coláiste Iognáid Galway on Friday 21 March. Provincial Tom Layden SJ, gave the blessing and the MC was RTE presenter Seán O’Rourke, brother of former pupil Kevin O’Rourke SJ.

Speaking both in Irish and English the President complimented the school on having all of its six hundred and fifty students present for the ceremony, along with staff, board members and invited guests, 800 in all, who fitted comfortably into the new sports hall. “It’s important that all the pupils are here because after all it’s their community,” he said.

He highlighted his family’s special connection with Coláiste Iognáid, pointing out that all four of his children had attended the school, and his wife Sabina had spent sixteen years on the Parent committee. Noting his own absence from Galway because of work commitments, he thanked the staff for their kindness and assistance to all his family during their time as students at ‘the Jes’ (as it is affectionately called in Galway).

He raised a good laugh when he said that his son Michael, who was abroad, asked him to say a special word of thanks to the well-known music teacher in the school, Carl Hession, who he said “got me through my Leaving Cert in six months!” Carl composed the new ‘Jes Anthem’. On the day he conducted the school choir singing it – you can see them perform it here.

The President also praised the Jesuits who founded the school in an Ireland of “poverty and harsh social conditions” in the late 19th century, when a second-level education was a “great luxury” and third level “an impossible dream” for the vast majority of Irish children. “It is no secret that it was the holistic ethos, sense of community and culture of personal development and social responsibility that first attracted so many to this school, and, as a parent and now President, I am deeply grateful to Coláiste Iognáid for your contribution to  the Irish education system.”

Remarking that the Jesuit influence was still an important part of the school, he recalled and welcomed the series of seminars organised by the college during the economic and church crises that unfolded in recent times. And he spoke of his meeting in recent years with Jesuit theologian Jon Sobrino, the only survivor of seven Jesuits, six of whom were shot dead by the military in El Salvador, along with their housekeeper and her daughter. The Jesuits had been critical of the government and its oppression of the poor of the country.

The President also took the opportunity to call on young people all over Ireland to eliminate bullying from their schools, in particular homophobic bullying. And he asked them to commit to an ‘Ethics of Friendship’ that would mean they valued equally every single student regardless of their religion, ethnicity, social background or sexual orientation.

He said that he was promoting the ‘Ethics of Friendship’ in all the schools that he visited. He then noted that Ireland’s education system was the best in the EU in its integration of pupils from other cultures. But he said it was important that students made sure that their fellow pupils did not feel excluded in any way for any reason.

He told the pupils that values such as inclusivity, community building and respect for diversity were strong values and a good education based on strong values is the best preparation people can have if they want to bring about change.

He said the Irish people had a great commitment to education, knowing well its importance, and he remarked that of all the EU member states Ireland had the highest number of graduates with primary degrees. But the important thing is the values we are taught and put into practice for ‘in the end we will be judged by the authenticity in our values’, he added.

School Principal Mary Joyce, a native Irish speaker, extended a warm cead míle failte roimh an t-Uachtarán agus a bhean chéile, assuring him that Irish speaking was alive and well in the school, where staff aimed at developing young women and men who were ‘competent, compassionate and caring’.

Deputy Principal Catherine Hickey and 3rd year pupil Donnacha Lohan presented Sabina Higgins with flowers, and the President with a specially sculputed bronze tree entitled ‘Sceach an eolais’, or the tree of knowledge. The piece was especially made for the President by past pupil John Coll (Class of 1972), who is now one of Ireland’s most prominent figurative sculptors.

According to John Coll, the design was based on the windswept whitethorn bushes that are such a part of the western seaboard environment, and the branches were representations of the range of activities that take place in the curriculum of Coláiste Iognáid, including rugby, hockey, basketball, rowing, drama, science, computing, literature, maths, and music.

In his final words of thanks, Chair of the Board of Coláiste Iognáid John Humphreys SJ said the President had asked the pupils to endorse a value system that the President himself had always lived by as a true ‘man for others’.

The President and his wife mingled with guests for quite a while in the new atrium, and it was late into Friday afternoon before staff, students and guests finally left the school on a day of celebration that will long be remembered.

Freedom of city for Peter McVerry