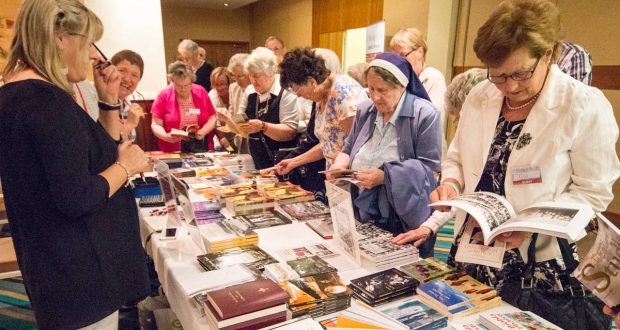 On Saturday June 27th, The Sacred Heart Messenger staff and writers welcomed over 120 readers and promoters of the Messenger to the Radisson Blu hotel in Athlone, on the banks of the Shannon.

The daylong event with the theme ‘Message of Joy’ comprised of talks, demonstrations and quiet prayer. It was planned as an opportunity for the staff, writers of the magazine, and the Jesuits to meet the readers and promoters of The Messenger. Many have been promoting the Messenger for over 50 years and their dedication is crucial to the survival of the magazine.

Besides the main talks,  many participants also took time to visit the prayer room, either for quiet personal prayer or for one of the four guided prayer sessions. Another popular session was the promoter’s workshop run by incoming Messenger Editor, Fr Donal Neary SJ, which afforded them the opportunity to share with others their experiences of promoting The Messenger.

Over one hundred and twenty visitors turned up on the day, many arriving before 9am. There were Jesuit and Sacred Heart themed meeting rooms. A coffee room with big glass windows taking in a spectacular view of the river and castle allowed readers and staff to relax and mingle after registration, before the official proceedings began at 10am.

Elizabeth Foley of The Messenger staff (a well-known name to promoters) welcomed everyone and introduced Most Rev Francis Duffy, Bishop of Ardagh and Clonmacnoise, who read the opening prayer. Messenger contributor Fr Brian Grogan SJ, gave a talk entitled ‘Celebrating You!’ He reminded people that the source of true joy was to know how much they were loved by God – unconditionally and just as they were here and now- not as how they thought they might need to be in order to win God’s approval.

Subsequent talks in the main conference area included spiritual companion and retreat giver Angela Marson’s, ambiguously yet appropriately titled, ‘Signposts in the Dark’. Here Angela dealt, in a deeply personal way, with a topic close to the heart of many Messenger readers – how to pass on the faith to younger generations, and how to cope when their loved ones do not share their faith. In the context of planting the seeds of faith in a new generation, Angela finished with the appropriate words: ‘Don’t judge each day by the harvest you reap: judge it by the seeds you sow.’

Fr Bernard McGuckian SJ, Spiritual Director with the Pioneer Association, spoke about devotion to the Sacred Heart, reminding the crowd of the story of the young sister, Margaret Mary Alacoque, to whom Jesus revealed his heart of love at a time when a God of wrath was much more part of the prevailing discourse.

Feedback from guests on the experience throughout the day was extremely positive, with one woman declaring she was “going home on wings”!

Both organisers and attendees hope that this special day will mark the beginning of an annual tradition. 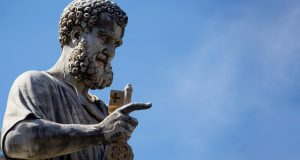