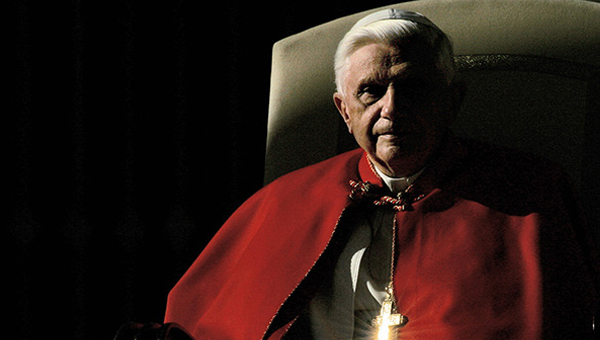 “I get very annoyed when people say ‘oh, what a gentle man, so shy, drinks orange juice’. He’s as tough as old boots when he’s commited to his policies.” Just one of the many insights into Pope Benedict XVI and his legacy from theologian Jim Corkery, who gave a lecture to the Irish Theological Association on Thursday 16 May at 7.30pm in the Arrupe Room, Milltown Park.

Jim studied Josef Ratzinger and is the author of a book on his theology (Josef Ratzinger’s Theological Ideas, Dominican Publications) as well as co-author of a book on the history of the papacy (The Papacy Since 1500, Cambridge University Press) So he was well qualified to give a lecture on the pope whose papal legacy  is inextricably interwoven with his theological legacy. As he put in on the night, “With Benedict the theologian will always out”.

His lecture, which you can listen to here, followed a number of stages. He began by talking a look back at earlier papacies that we remember, outlining their defining features. From that he drew out  out the key features of Benedict’s papacy and examined his legacy with regard to issues such as  liturgical reform, his fairly swift handling of sexual abuse cases (in particular that of Marcial  Maciel, founder of the Legionaries of Christ) and ecumenical matters.

He quoted Cardinal Danneels who once said: “With each pope comes a style, and style is not nothing’. And he contrasted Benedict’s style with that of his predecessor, John Paul II, whose face was the most seen globally in the history of humankind. Benedict was well aware that he was not the charismatic, dynamic, celebrity style pope that was his predecessor, but was content to say, “One simply has to know who one is and who one isn’t.”

Jim’s final verdict on Benedict’s papacy not surprisingly focuses on his resignation earlier this year. Its historical importance and its significance for future popes cannot be over-estimated, he concludes.