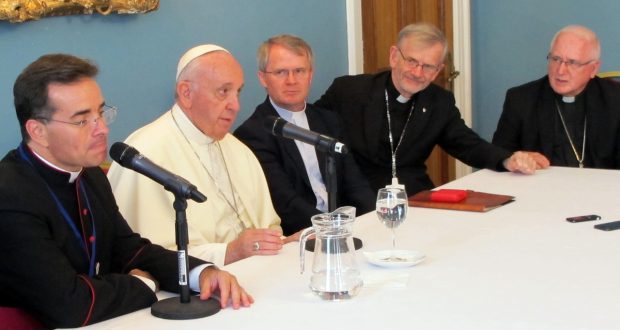 Pope Francis had a private meeting with over 60 Irish Jesuits, including the Irish Provincial Leonard Moloney at the Papal Nunciature in Dublin on 25 August 2018. He greeted them warmly and responded to questions from a number of them.

Fr Moloney began by asking Pope Francis if there was anything the Irish Jesuits could help him with in line with their Fourth Vow – special obedience to the pontiff. The Pope responded by asking them directly to help to address clerical sexual abuse, with the healing process and with the reparative work that needs to be done.

Brendan McManus SJ, who was the photographer for the meeting, was deeply affected. “It was an amazing day to be a Jesuit priest in Ireland and to meet the Pope”, he said. “He took time out from his busy schedule to meet briefly with the Irish Jesuits, and I was the Jesuit photographer. It made me sit up and ask myself: how can I help uncover abuse and also reach out to the victims for healing?

In fact, when Brendan had the opportunity to ask a question, he raised the question of abuse once again. Speaking in Spanish, he asked Pope Francis, “How are you and the Church going to handle this clerical sex abuse scandal, because the impact which the handling of the abuse is having is killing us?” The Pope responded by reiterating his commitment to eradicating it entirely. He spoke passionately about the Jesuits helping him in the work of addressing clerical sex abuse and clearly spelled out the dangers of abuse of power.

John Callanan SJ asked how the Pope managed to keep his serenity. He replied that keeping a sense of humour is very important, and alluded to former Superior General of the Jesuits Fr Peter Hans Kolvenbach as an example of someone who was well known for his jovial and optimistic spirits.

Other questions came from Michael Bingham and from Michael O’Sullivan. And when the Pope spoke emphatically about avoiding sterility and attracting new vocations, novice Matthew Tumulty got a special mention.

More broadly, according to Brendan, the Pope urged the Jesuits “to be faithful in prayer and to ‘keep ourselves in consolation’, a Jesuit phrase meaning to be connected to the Spirit and to be compassion in the world”.

Reflecting on the whole experience, Brendan said: “On a personal level, it was overwhelming to be with the Pope; it was very emotional and heart-warming.”

Jesuit Scholastic Niall Leahy also gave his overall impression of the meeting. “Given the circumstances of his visit, our meeting with the Holy Father inevitably made us painfully aware of some of the dark realities within the life of the church. But we were also consoled to witness how a mere man can courageously face these realities and carry the cross. For me this was a paschal moment.” 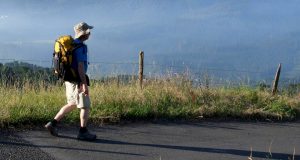 How to have a happy new year