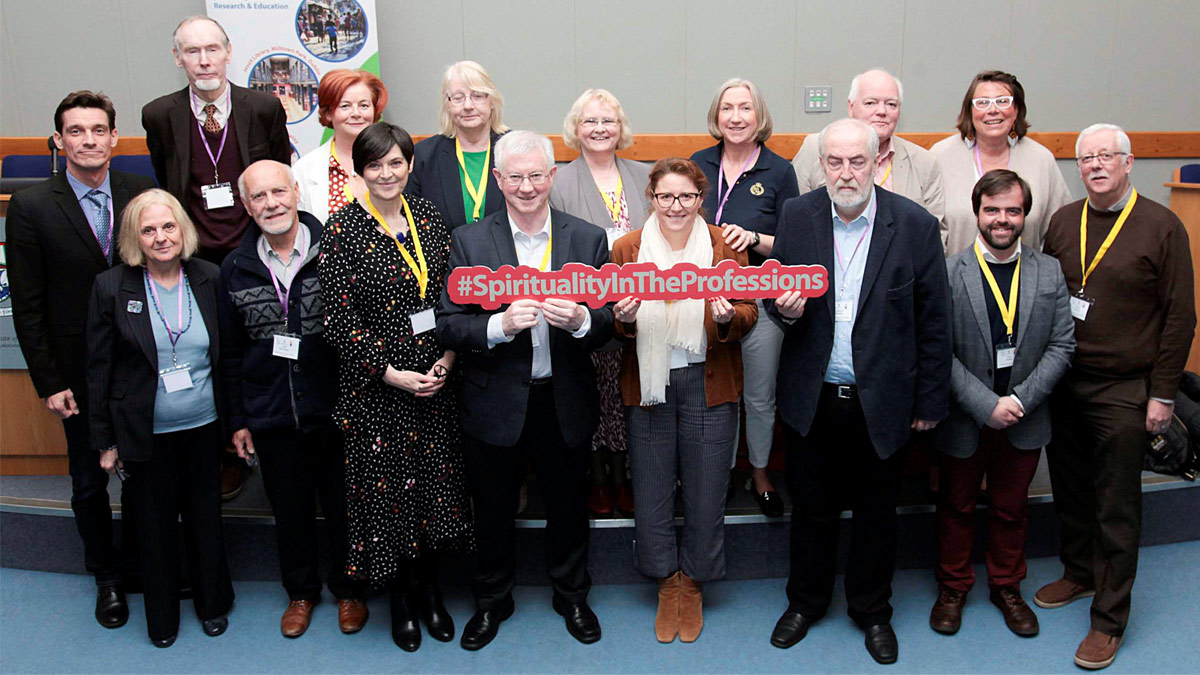 The Spirituality in Society and the Professions international conference at Waterford Institute of Technology (WIT) from 16-18 May 2019 attracted 110 participants from 19 countries as far away as Peru, Pakistan, China and Australia. Jesuits and their partners in mission were among the presenters who covered a range of spirituality-related topics such as a first-person methodology, social and planetary well-being, ethics and anthropology. The conference was a collaboration between WIT, the Spirituality Institute for Research and Education (SpIRE) and the European Institute for Spirituality in Economics and Society (SPES).

David Coghlan SJ, Professor Emeritus and Fellow Emeritus at the Trinity Business School, TCD, presented a paper on ‘Developing a Spirituality of Scholarship: A First Person Methodological Approach’. Drawing on the influential work of philosopher and theologian Bernard Lonergan SJ, he explored how scholars may seek and find God in the ordinary every day of their academic life by providing an empirical methodology. When they employ a ‘from below upward’ movement (a philosophic viewpoint), e.g., being attentive, intelligent and reasonable and a ‘from above downward’ movement (a theist and theotic viewpoint), e.g., being-in-love with God, moral action and knowing how God is at work, they contribute to the development of a spirituality of being a scholar.

Michael O’Sullivan SJ, director of SpIRE and programme leader of the MA in Applied Spirituality at WIT, gave a presentation on ‘Spiritual Capital: Spirituality for Social and Planetary Well-being’. He responded to Cardinal Kurt Koch’s call for a Europe that needs a “spiritual key currency besides the euro” by proposing three ways of conceiving a meaning for spiritual capital. These involved resources for the spiritual benefit of the person, key lived experiences and authentic interiority. Michael maintained that living according to these meanings is a form of spirituality that can serve society and the professions, and the planet. He illustrated his points, for example, with a story of someone rich in spiritual capital and highlighted the importance of authentic self-presence with a case scenario.

At parallel sessions, Gavin T. Murphy of Irish Jesuit Communications gave a talk on ‘The Psycho-Spiritual Inspiration of Three Saints’. Drawing from psychology and spirituality, he investigated the mental-health-related factors that enabled Saint Francis of Assisi, Saint Ignatius of Loyola and Saint Hildegard of Bingen to ‘burst out in praise’ in the midst of pain or suffering. Rossano Zas Friz De Col SJ of the Pontifical Gregorian University in Rome presented a paper on ‘The Anthropological Foundation of Spirituality in the Professions’. In it, he aimed to propose an anthropological foundation as a touchstone for understanding spirituality, and accordingly took an interdisciplinary, cross-cultural and cross-professional approach.

Other partners in mission who presented at the conference included Kevin Jackson of Fordham University in New York City with a paper entitled ‘Music as a Profession of Contemplative Journey: Castles, Bridges, and Butterflies’ and Jose Luis Fernández of Universidad Pontificia Comillas in Madrid with a paper entitled ‘Spirituality as the Foundation of the Ethics of Professions: Anthropological roots of a successful academic experience UNIJES – Jesuit Universities in Spain (1993-2018)’. Furthermore, participants were offered a reflection each day known as a ‘Spirit Moment’ by Phil Brennan and the Waterford Peace Choir gave a musical presentation. There was also a pilgrimage experience in Waterford after the final session on Saturday.

Book launch: ‘Deeper into the mess’

Spirituality and the professions

The transformative power of spiritual capital