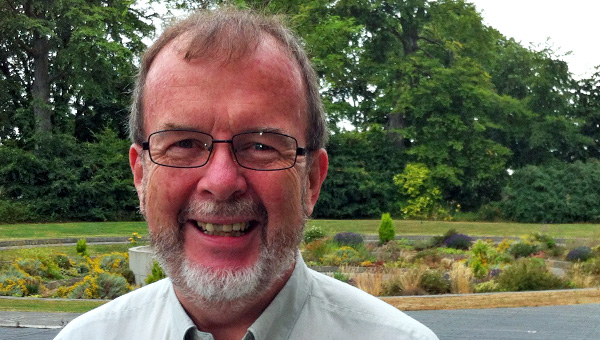 Since the announcement, on 29 May, that next Easter the joint noviciate will move to Dublin under the direction of Brendan Callaghan, the Irish Jesuits looked forward to meeting the new master of novices. He spent two days here in July, seeking  a site for the noviciate (no decision has been announced yet), and found time to be interviewed by the Editor of IJN.

When Brendan, as a 16-year-old in Stonyhurst, first thought about joining the Jesuits, he saw so many reasons against it that he did not mention it to a soul, at home or at school. So he was startled when Fr Gerry Hughes (the Walker) said to him one day: I think you are thinking of becoming a Jesuit. This was uncanny. It turned out that when Gerry brought Holy Communion to bed-bound Brendan during a flu epidemic, something about the boy’s response, coupled no doubt with a nudge from the Holy Spirit, triggered the priest’s challenging question. Brendan answered Yes, I am. But he did not speak of it to anyone else, not even his parents. It was only much later that he realised that his father regretted the choice of vocation. After growing up on a farm in what he remembered as priest-ridden County Cork, he would much have preferred his son to follow his two parents into the medical profession. It was years before he was reconciled to Brendan’s choice, on the occasion of Brendan’s first vows, taken jointly in Heythrop (the Chipping Norton Heythrop) together with another novice and Fr Jack Mahony who was taking final vows. The community organised such a celebration for the three voventes that Dr Callaghan changed his mind: any crowd that could throw a party like that must be OK.

Brendan, who turned sixty-five on 29 July, grew up in Liverpool and was schooled in St Francis Xavier’s, then in Stonyhurst, where he came to loath rugby and excel at cross-country running. He has been blessed with robust health. His greatest joy is hiking on his own with a backpack from one mountain hut to another in the arctic north of Sweden. Before he left school, Stonyhurst offered him what would now be called a gap year, teaching in St Ignatius’ College, Chishawasha, in the then Rhodesia. His parents were nervous of the offer, since Ian Smith with his UDI was stirring up trouble. But Brendan sees that year as critical to his vocation. “The Jesuits treated us two schoolboy volunteers as honorary scholastics, and I got a taste of what active Jesuit life was like. A year later I was experiencing the last throes of the crypto-monastic noviciate in Edinburgh. The whole system was very formal. There were no serious experiments. But I’d lived in a working community for a year and knew that this was not what Jesuit life would be like. That preparation saved my vocation, and also got Africa into my blood.”

After noviciate came the years of study: philosophy in Heythrop, a degree in experimental psychology in Oxford, followed by two years of well supervised clinical training in Glasgow; four years of theology in Heythrop (now in London); a good pastoral year in the Glasgow parish. Then he taught psychology for three years in Heythrop, and expected that he would be there for the rest of his life, except for tertianship, which he made in Missouri, USA. This was a richly graced experience under the direction of marvellous Vincent O’Flaherty. Back from that to be principal of Heythrop from 1985 – 1997. After a sabbatical in South Africa he was called back to Heythrop. Following an unfortunate choice of Principal, Heythrop was in turmoil. In this second, brief term as Heythrop Principal, Brendan moved the college from Cavendish Square to Kensington Square, then settled down to teach psychology. It was not to be. Five years ago he was called at short notice to be Master of Campion Hall, giving his energies not so much to teaching as to cura personalis and hospitality.

Now a new chapter is opening, as Master of Novices for four provinces. His contact with the Irish province has been limited but focussed. For about 10 years he has been coming over and working with the European tertianship programme, more or less since it got going in Manresa. He also contributed to the joint tertianship programme when it was located in the North. He was in the Gonzaga college chapel for Tony O’Riordan’s ordination.  When his appointment to Dublin was announced, it was quickly followed by a little wave of supportive and welcoming emails from his many Irish friends, which touched and delighted him. Over the years Brendan has been a delegate as well as superior of many of the small formation houses in London over 20 years or so. He knows what it is to care for younger Jesuits. He enjoys one-on-one ministry, and preaching. What sort of noviciate will he shape in Dublin? Immersion or isolation? Missionary or monastic? Brendan gives a clear answer. The novices will be out of the house much of the time, in a range of experiments. Their time in the noviciate will be limited, but it will be a quiet, reflective place, good to retire to.

When he was discerning his own vocation, his biggest temptation was not concerned with the vows so much as an overriding fear that Jesuit life would be boring. Looking back at the vicissitudes of his life in the Society, he marvels at how wrong he was.