Ireland must do more for migrants 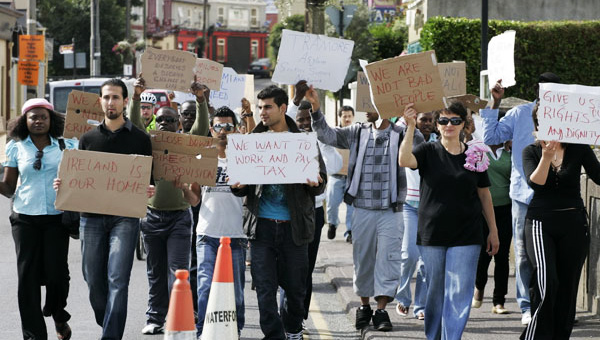 “At the end of a two-year period, in which Ireland committed to resettle and relocate 4,000 persons under the Irish Refugee Protection Programme, approximately one third have arrived. Ireland can and should do more.” So says Eugene Quinn, Director of the Irish Jesuit Refugee Service. He was speaking at the launch of a new report entitled Pathways to Protection and Inclusion, Ireland’s role in global refugee protection and migration movements, on Tuesday 24 October. Read the full report here.

The report by the ‘Irish Refugee and Migrant Coalition’ is the collaborative effort of 23 leading Irish organisations, including JRS, who are working locally, nationally and internationally on migration and asylum issues.  It sets out some of the major changes in the area of migration and asylum since 2016 from an International, European and Irish perspective. It also outlines a range of clear and pragmatic recommendations in order to ensure Ireland can respond responsibly and display solidarity with the regions and persons most affected by on-going conflicts and mass displacement.  According to Eugene Quinn, Ireland can do more “by offering enhanced legal routes to safety so that men, women and children, fleeing persecution and conflict, are not forced to undertake life threatening journeys in search of refuge.”

The report states that the growing global migration crisis, which has resulted in 65.6 million people being uprooted from their homes, demands a more coherent and coordinated response from the Irish Government. The coalition is  proposing a new framework for the Irish Government to improve its response to refugees and migrants. Many of their recommendations echo those published by the Joint Committee on Justice and Equality on Immigration, Asylum and the Refugee Crisis.

Caoimhe Sheridan, Coordinator of the Irish Refugee and Migrant Coalition, said: “Our report, Pathways to Protection and Inclusion, sets out key recommendations which, if implemented, would provide a solid basis to ensure more people reach Ireland safely, improve the integration outcomes of refugees and migrants in Ireland, while also contributing to global efforts to address the fundamental causes of the global displacement of people.”

Jim Clarken, Oxfam Ireland Chief Executive, said: “So far this year 144,656 people, roughly the entire population of Wexford, have risked their lives to reach Europe by sea. Over 2,700 of them didn’t make it. This is not a crisis for Europe but for the hundreds of thousands of children, women and men forced to flee, who face violence, imprisonment, exploitation and death along the way.”

Europe’s response to those in need has largely focussed on stopping so called “irregular migration” without due regard for people’s rights. After two years of crisis mode, Jim Clarken says that “there is now a window of opportunity where Ireland and EU partners can examine the effect of current policies on people’s lives and propose better alternatives. It is vital that Member States show leadership and revise corrosive policy to truly meet the needs of people on the move.”

The authors of the report are calling on the Government to meet its outstanding relocation obligations as soon as possible, and for Ireland to respond to projected global resettlement needs by resettling 4,500 persons, forcibly displaced by war and oppression, by 2020.

Fiona Finn, CEO of Nasc, said: “One of the key recommendations of the report is to establish safe and legal pathways of migration for refugees fleeing conflict. We welcome the fact that the Irish Government has recognised this in its recent announcement of the introduction of Community Sponsorship Programme for refugees. This programme will bring a community response to a global issue. It will also tap into the huge generosity of spirit shown by communities throughout the county to play a role in supporting refugee families. This programme also will assist Ireland in reaching and increasing resettlement numbers and will ensure that refugees are received into a supportive and welcoming community.”

Giving of their time for 100 years

‘Every number has a face’