A Jesuit, a scholar and a gentleman 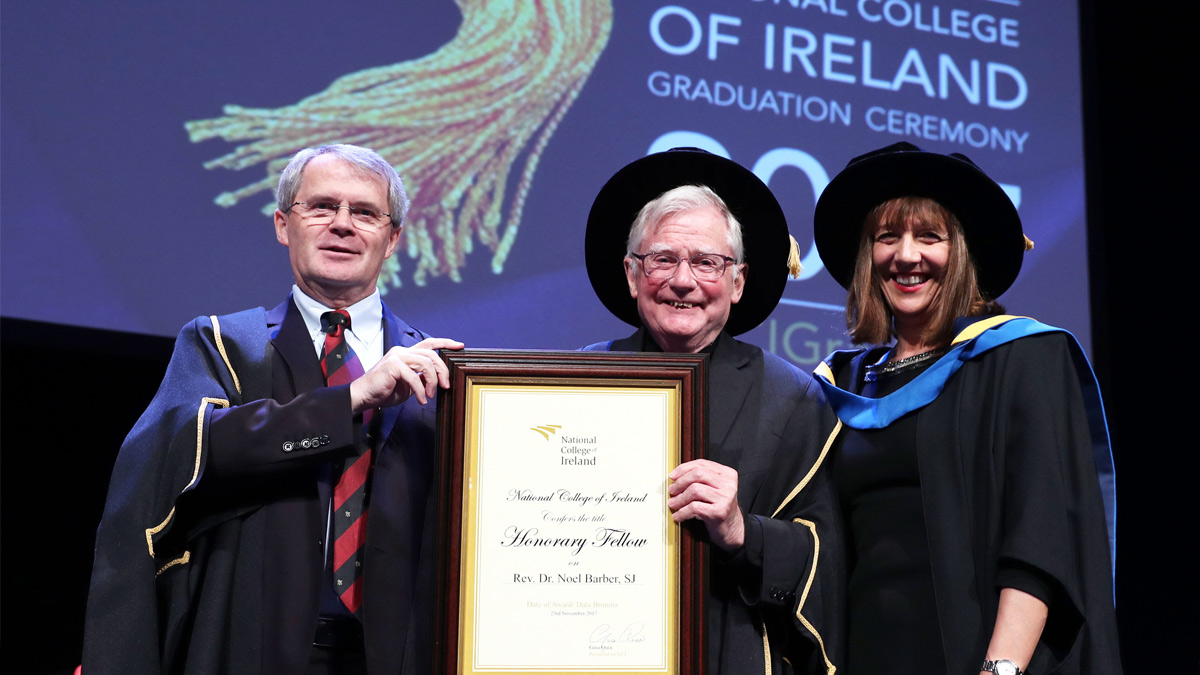 Noel Barber SJ has just been awarded an Honorary Fellowship of National College of Ireland for his ministry to education at the college’s graduation day on 23 November. The citation was delivered by fellow Jesuit and Provincial Leonard Moloney who is also Chair of NCI.

Fr Moloney outlined Noel’s extensive university studies in the field of education which include a master’s degree and a doctorate from the University of London. During his ministry, he studied and taught in the United States, and served as an administrator and headmaster at schools in Ireland.

“This, then, is the immensely rich educational experience he brought to the NCI board when he was appointed to it in 2001,” said Fr Moloney adding,  “and which he continued to serve with his insight and wisdom until just two years ago.”

Noel was directly responsible for the discovery of Caravaggio’s The Taking of Christ, as the Provincial pointed out. It was his decision to have the painting sent for cleaning to the National Gallery where it was identified and now hangs in the Gallery on indefinite loan. According to Fr Moloney, “Noel became something of a celebrity in the art world, and even further afield, in the aftermath of that dramatic discovery.”

Painting an adequate picture of Noel’s range of activities was challenging, according to the Provincial, particularly in regard to Noel “as an always pastorally active priest.”  He referred to Noel’s work on marriage tribunals in the archdioceses of Dublin and Westminster as well as giving the Spiritual Exercises of Saint Ignatius Loyola for six months of the year in Santa Barbara, California.

The Provincial commented on how warmly Noel is regarded and how highly respected he is by legions of his former pupils. “In particular they valued in him, as we do now, his astonishing energy for a man in his ninth decade, his enthusiasm and appetite for challenge, and his unfailing courtesy and good humour.”

See below for the full citation:

It is a great honour and privilege for me, as not only the Chair of National College of Ireland but also, as it happens, Irish Jesuit Provincial, to deliver the citation for the conferring of an Honorary Fellowship of the College on Noel Barber, my fellow-Jesuit.

His early education was in Belvedere College, not far from where we are now. After joining the Jesuits in 1953 and apart from his Jesuit formation and ecclesiastical studies in preparation for ordination in 1967, he took an Arts degree from University College Dublin, conferred in 1958, and his other, extensive university studies have all been in the field of education. They comprise the Higher Diploma from UCD in 1969, a Master’s degree in education from London University (1971) and a doctorate from the University of London (1973).

He has also studied at Gonzaga University, Spokane, Washington and his two years as Visiting Scholar at the ESRI from 1987-89 bore fruit in his book, published in the latter year, Comprehensive Schooling in Ireland.

That book and other writing in the field of education were the fruit not only of his research scholarship but also of his long and accomplished service in the classroom and in school administration. He was Headmaster of his old school, Belvedere, in the 1970s and later filled the same role in Gonzaga College, Dublin, in the early 1980s.

Over his lifetime, he forged particularly close links with Gonzaga, where he began his teaching career as a young Jesuit and he has more recently served as rector of the Jesuit community and chair of the board of management. In addition, he has taught in Crescent College Comprehensive in Limerick, later serving on its board of management for a decade, and he has also served as chair of Sallynoggin Community School and Ballymun National School.

This, then, is the immensely rich educational experience he brought to the NCI board when he was appointed to it in 2001 and which he continued to serve with his insight and wisdom until just two years ago.

The career I have outlined is more than enough for any working lifetime, even a lifetime as long and as vigorous as Noel’s. But it is, at best, only half the story. He was editor of Studies, from 1989 until 2001, a span which makes him the third longest serving occupant of the editorial chair in the Jesuit journal’s more than hundred years’ history. In that capacity he lived in, and was superior of, the Jesuit community in Leeson St and is intimately associated with the discovery of Caravaggio’s painting, The Taking of Christ. It was his decision to have what was thought to be a copy of the original by Van Honthorst, hanging a little disregarded in the community dining room, sent for cleaning to the National Gallery. There it was identified as Caravaggio’s own work and now hangs in the Gallery on indefinite loan to the nation and for all the world to see. Noel became something of a celebrity in the art world, and even further afield, in the aftermath of that dramatic discovery.

Another link with his time in Leeson St is his work on the writings of the English Jesuit poet, Gerard Manley Hopkins, who lived round the corner in what is now Newman House on St Stephen’s Green for five years in the 1880s. Hopkins was never in Leeson St himself – the house was only opened as a Jesuit community some decades later – but the legacy of Jesuits working, like Hopkins, in the university passed to Leeson St when the National University was established and UCD acquired the St Stephen’s Green residence where Hopkins had been, and you could say that the spirit of Hopkins lingers there. Noel Barber has become heavily involved in Hopkins scholarship at the highest level in recent years and has lectured on the poet at conferences in Dublin, London, Oxford, Denver, Jerusalem and Rome. He is also co-editor of volume five of Hopkins’s Collected Works, shortly to be published by Oxford University Press.

What I have said still gives a quite inadequate picture of Noel’s range of activities, not least as an always pastorally active priest. One of his particular interests has been the care of marriage and assistance with marriages that fail, and he served as a Judge on the National Marriage Appeals Tribunal of Ireland. He has been doing summer parochial work in the United States since the late 1970s and is now specializing in giving the Spiritual Exercises of the Jesuit founder, St Ignatius Loyola, for six months in the year in Santa Barbara, California. As noted earlier, he was superior of several Jesuit communities. In addition, he recently served as Assistant Provincial for some six years.

There is more that could be said about Noel’s remarkable career of service in a variety of fields, but perhaps this is enough. Let me end by saying that, while I am very much his junior colleague as a Jesuit, I duly followed him into the work of secondary education and the work of administration in a number of Jesuit schools in this country, which is where I have spent much of my own working life to date, and I have long been aware of the distinguished contribution he has made in this field in particular, in addition to so many others. I know at first hand how warmly he is regarded and how highly respected he is by legions of his former pupils. They remember him as someone who was unambiguously in charge but always approachable and fair and someone gifted with a wonderful memory for, and interest in, them and their families and the outcome of their lives after school. In particular they valued in him, as we do now, his astonishing energy for a man in his ninth decade, his enthusiasm and appetite for challenge, and his unfailing courtesy and good humour.

In honouring Father – Doctor! – Noel Barber SJ, I submit that NCI is honouring itself and I have great pleasure in conferring this Honorary Fellowship on him today.

The healing power of music

We could be heroes

Interculturality in Jesuit Education: Bringing it into the classroom

‘To live this mission in our broken world’