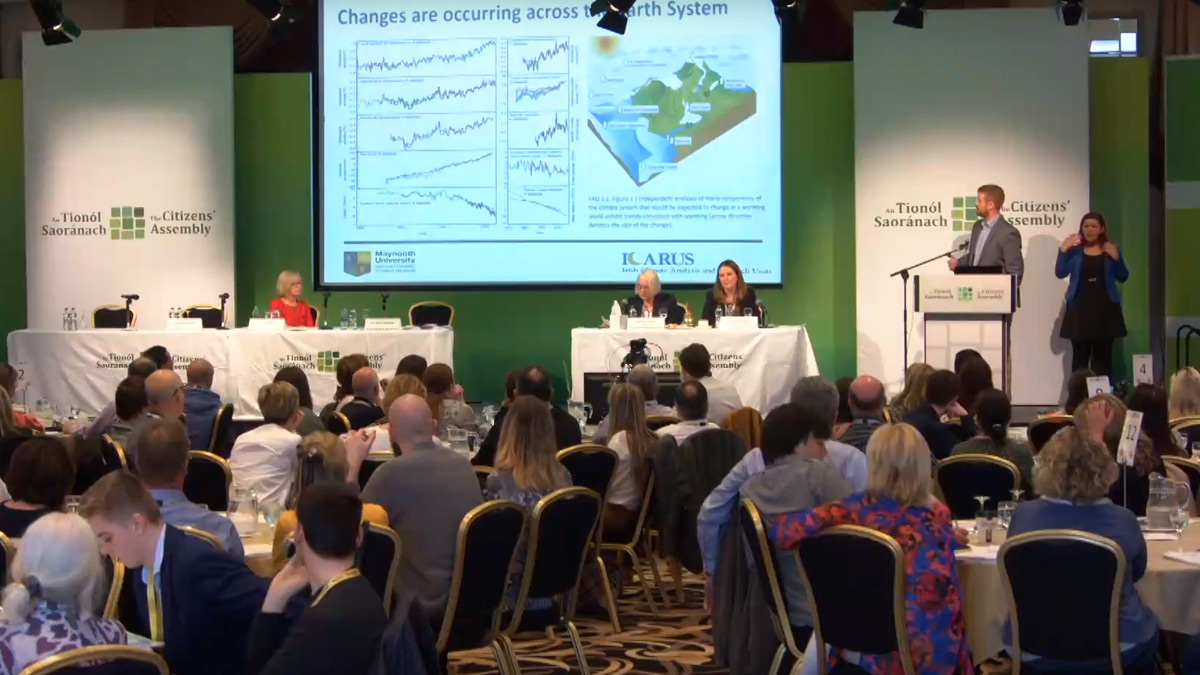 The Jesuit Centre for Faith and Justice, in a statement today, (Monday, 6 November 2017), has welcomed strong calls from the Citizens’ Assembly for the government to increase political action on addressing climate change. The Assembly on climate change convened for the second time on Saturday 4 and Sunday 5 November. They heard imput again from experts in a variety of areas of environmental concern. On the Sunday, following four days of presentations and deliberations, those gathered voted on 13 recommendations in response to the question: “How the State can make Ireland a leader in tackling climate change?”

Other recommendations made by the Assembly included increasing investment in sustainable public transport, peat restoration and the phasing out of peat subsidies, enabling community ownership of renewable energy, a carbon tax on emissions from agriculture, and increased support for land diversification. During the Assembly, citizens and observers heard that many of these steps had multiple benefits including improving public health, lowering air pollution, and protecting biodiversity.

According to Catherine Devitt, Environmental Justice Officer with the Jesuit Centre for Faith and Justice who attended the Assembly as an observer, “The Citizens have sent a strong signal to the government that it must engage much more seriously, coherently, and urgently on the issue. The Assembly has recommended that climate change be at the centre of policy making in Ireland. To date, there are many examples to show that this has not been the case. Going forward, there must be policy coherence and consensus across all government departments, even if difficult political decisions have to be made.”

The Jesuit Centre for Faith and Justice had made a submission on climate change to the Citizens’ Assembly, one of 1,200 responses by groups and individuals on the issue of tackling climate change. In their submission, the JCFJ urged the government to put a workable plan in place to reduce greenhouse emissions. Catherine notes that Ireland is already on target to fail the deadline set for us by the EU for 2020, “If government doesn’t act swiftly,” she says, “it will be a real challenge for us to meet our 2030 targets on harmful emissions as well. Climate change is happening right now,” she added, ” and its effects are most keenly felt in some of the poorest regions of the world. We cannot afford a wait-and-see climate policy approach. The State has a responsibility to protect its citizens now and future citizens from preventable harm. Considerable political leadership is required if the State is to, at least, make its fair share of the global effort.”

Commenting on the whole process of submissions and the gathering that took place over two weekends, Catherine said that the extent of submissions made to the Assembly and the commitment of the group in engaging on the topic clearly show that Irish society takes climate change very seriously. “There is now a strong demand for ambitious political leadership to enable a just and transformative transition to a low carbon society.”

The recommendations will now form the basis of a report that will be presented to the house of the Oireachtas for debate. Earlier this year, the Jesuit Centre sent a submission to the Assembly, outlining the seriousness of climate change and

For further information on this issue you can contact  Catherine by phone at (01) 855 6814;  or email [email protected],

Full details of the Citizens’ Assembly weekends on climate change can be accessed here.

New from the Messenger Publications

Towards a zero-waste lifestyle

‘Bring back the eviction ban’