The Thirty-fifth General Congregation (GC35) of the Jesuits was formally opened in Rome on Monday 7 January. More than 220 Jesuits from around the world convened at the Jesuit Curia, which is close to the Vatican, to elect a new Superior General and to discuss the apostolic challenges confronting the Society in the years ahead. Father Kolvenbach is expected to offer his resignation to the General Congregation and, following the election of a new Superior General, the Congregation will move to the discussion of a number of issues concerning Jesuit identity and mission. The opening address of GC35 was delivered by Cardinal Rodé you can download it here. The photograph shows Jim Corkery, one of the two Irish electors, in procession at the opening liturgy. 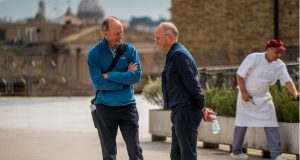 Feedback for Jesuits on GC35