The first ever JESEDU Congress (International Congress for Jesuit Education Delegates) from all six regions of the global network of Jesuit schools took place in Rio de Janeiro from October 15-21 to reflect on the call of General Congregations 35/36 ‘to act as a universal body with a universal mission’. Irish education delegate Brian Flannery gives an account of his experience at the event.

The audacity of the impossible

The beauty of the Rio de Janeiro setting matched the significance of the event and it felt as if the figure of Christ the Redeemer – that iconic image of the city which we could actually glimpse through the window of the conference centre – looked kindly on our proceedings. This event, which was convened by the Secretary for Education, Fr Jose Mesa, continued conversations begun in Boston, USA (2012) and Manresa, Spain (2014) about the nature and future direction of Jesuit education.

It was a great event, not least because every region and province of the world was represented – and thus giving visible expression to the idea of a universal body – but also because there was a tangible excitement about the endless possibilities that were now available to us to work together and share in a universal mission.

The week was meticulously planned and the congress was packed with an intense programme of presentations, testimonies, conversations and planning sessions. By the week’s end a draft statement of action had been agreed and all six regions were signed up to a common programme of work, the final version of which will be published after delegates have had time to reflect on it and discuss it with their Provincials.

The congress was unusual in that engagement with the main themes started as far back as January. These included papers on The Call to Innovation, Inter-religious and Inter-cultural dialogue, Ecology and Social Justice and the Global Network. The papers had been issued to delegates so that they could engage in an online conversation about the issues raised. This electronic exchange was facilitated by the Galway-based initiative Educate Magis. This meant that by the time the delegates met in Rio they were already tuned into the conference themes and had personally responded to each of the papers.

The key-note speakers had re-written their papers to take account of the feedback they had received and so the conversation at the congress progressed at a much deeper level.  The technology had enabled the global conversation to take place in advance of Rio and it demonstrated how inter-connectivity could be easily maintained after the event itself. The work of Eamonn McGuinness and his team in Educate Magis is quite remarkable and a source of real pride for the Irish Province.

The highlight of the congress for me was the address given by Fr General Arturo Sosa SJ. He acknowledged and ratified the work of the schools and spoke about their importance in offering generations of students an education ‘that will radically change their lives’ and offer them the means ‘to contribute to the humanisation of the world’. His address was also a call to the delegates and to the schools to go, in the spirit of the magis, even further…‘to seek the audacity of the impossible’.

In a speech that was wide ranging and challenging three points stood out for me.

Firstly, he emphasised that Education was an intellectual apostolate but stressed that academic excellence must be understood in the context of the integrated development of the human person (i.e. 4Cs of competence, conscience and compassionate commitment). The goal of a Jesuit education is to train individuals give meaning to their lives and contribute to the common good within their context, their society and their planet.

Being true ‘intellectuals’…allows us to understand the world and its challenges, so we can proclaim the Good News in a way that’s pertinent, attractive and transformative… and so that human beings can configure the world in a way that is more compassionate, and therefore more divine.

It was refreshing to hear the main activity of schools being so appropriately affirmed and placed in this broad and visionary context.

Secondly, he spoke about the three faces of the service of reconciliation; how true reconciliation with God is impossible, unless it comes with reconciliation and justice among humans and between humans and creation. He talked about “being bridges” in contexts of conflict and how the price of this often involves being stepped on by both sides of the fight. An apt if challenging image.

That is the price of our service and, as we try and follow Jesus’ example, we’re ready to pay it.

It reminded me that being a Christian is not meant to be easy and it is not by accident that the cross is the central image of our faith. Yet suffering in this context and for this cause is a price worth paying.

Thirdly, change is inevitable and so the need for on-going discernment is constant. The practice of discernment – both personal and institutional – is an imperative if our schools are to be truly Jesuit. Fr General outlined a number of challenging realities facing mankind (migration, environment, secularism, extremism, inequality…) and the need for schools to prepare its students not only to be able to cope with these but able to “configure the world” in a more just and compassionate way.

He asked if our schools can be places of radical innovation and genuinely responsive to these needs. He encouraged us in our discernment to ‘fly high’, to take risks for the sake of the Lord and cautioned against being mediocre, contented with repeating apostolic programs that don’t reach individuals or address their needs.  He also exhorted us to think outside the box and to be open to new models of school.

He finished his address by introducing a fifth C. He talked about the need for Consistency; for Jesuit schools to move beyond the fine talk and the high ideals to action. There must be a coherence and a consistency between what we say and what we do. We must walk our own brave talk.

It was a memorable and inspirational event. The challenge now is to respond to its challenges and have the courage to seek ‘the audacity of the impossible’.

Defending religious ethos in the name of pluralism 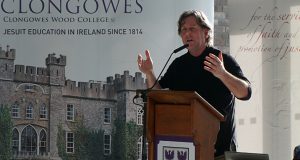 The joy and urgency of Jesuit wisdom