Jesuits back for The Ploughing 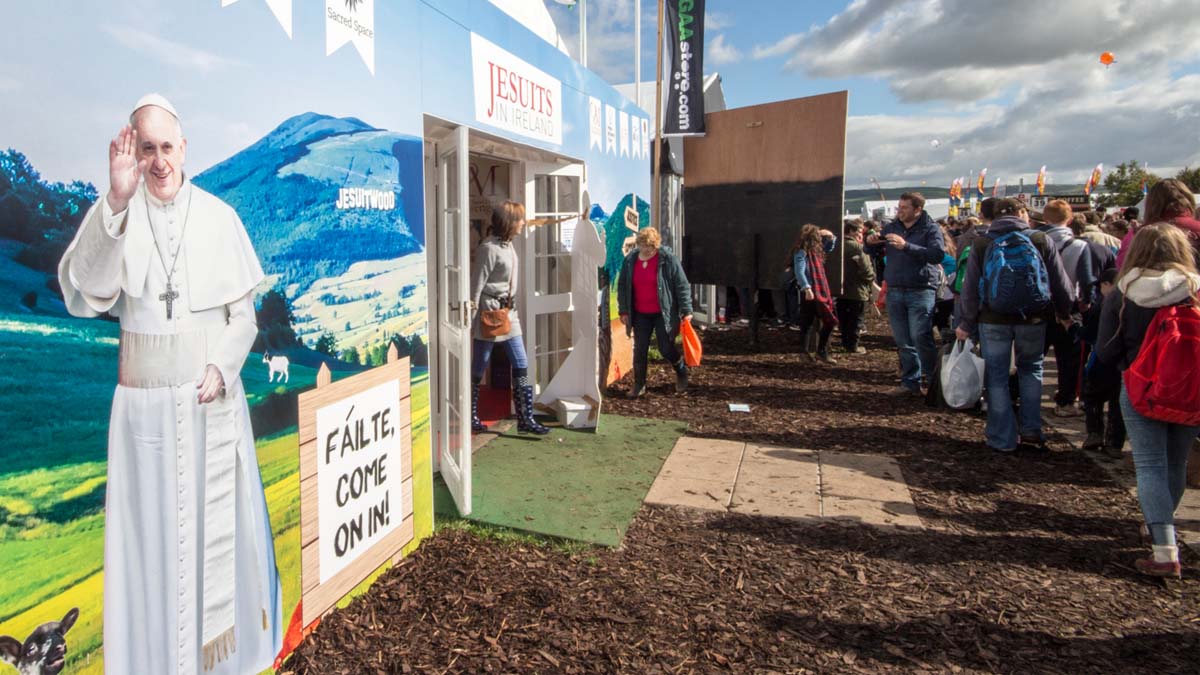 Building on the success of last year, Jesuits and their lay colleagues and friends in the Ireland will again have a significant presence at the National Ploughing Championships which take place in Screggan, Tullamore, Co.Offaly from September 20th-22nd. Visitors to the Jesuits in Ireland marquee will be able to get a blessing with the cross of  Fr John Sullivan SJ, whose beatification was approved by Pope Francis earlier this year.

Blessed John Sullivan (elect) was known for his love of the poor, his life of prayer and fasting, and his care of the sick. Many people speak of healing received through his intercession both when he was alive and now after his death. Last year thousands of people came to the quiet Sacred Space prayer room in the tent to rest weary legs, and get a blessing for themselves or their loved ones with the cross.

Visitors to the marquee will be able to speak with the Jesuit priests present including Kevin O’Rourke SJ, well-known to ploughing aficionados. He will celebrate mass in the Jesuit marquee every morning at 7.30am and all the people working or exhibiting are most welcome to come along.

All visitors  will also be able to avail of the opportunity of taking a selfie with a life-size cut of Pope Francis which was a huge attraction last year for young and old. Many of the photos taken were posted on The Farmers Journal app, specially created for The Ploughing. This year, students from Jesuit schools including Gonzaga and Belvedere will help out at the marquee, posting about what’s happening on Facebook and Twitter and making their own mojo videos.

They will also help distribute the very popular Making Good Decisions leaflet – a small handy guide to deciding well and based on the wisdom of the Jesuit founder St Ignatius.

Peter McVerry and other Jesuits will be in the marquee – there was a buzz in the tent last year when Peter spent an afternoon there talking to all who came. He was manning the Peter McVerry Trust stand along with with workers from the well known organisation that serves the needs of the homeless.

The Jesuit tent will house individual stands of a wide range of Jesuit apostolates, including the Sacred Heart Messenger and Messenger Publications; Re-Link the schools supplement of the Messenger; Manresa- Jesuit Centre of Spirituality; Sacred Space, the popular online prayer website,  The Pioneer Association; Irish Jesuit Missions;  the Jesuit Centre for Faith and Justice; the Jesuit Refugee Service and Jesuit Vocations.

There will be a warm welcome for all who visit the Jesuits in Ireland, Block No. 3, Row No 25, Stand 628.  It’s front is memorable, designed by Irish Messenger Publications. Last year, just after the ploughing ended, the photograph taken of the outside of the marquee was chosen by the Irish Times for its photo of the week.

Novices work hard at the Ploughing

Jesuits experience the joy of Youth 2000