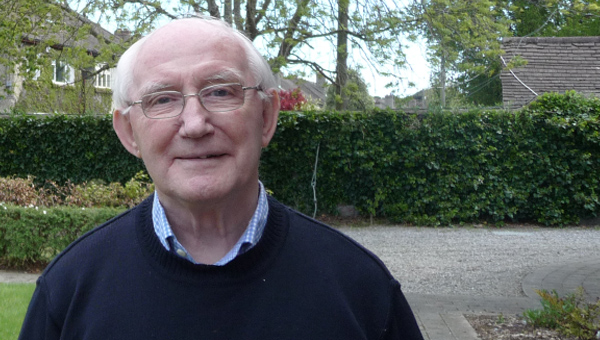 It is rare for us to mourn such a servant of the Irish Jesuits as Joe Dargan. His looks were unremarkable: small, bespectacled, usually smiling. He was sturdy, a wing forward on Clongowes cup teams. His friends would describe Joe’s style of rugby as robust. It showed the steely determination hidden under a mild façade.

Wherever he went, he was landed with responsibility: starting with Third Line Prefect in Clongowes (he commented ”In 1958 when I volunteered to go to Zambia, I was told that my Zambia was to be Third Line prefect in Clongowes.”). He went on to be Director of the Province Social Survey, Rector of Emo, of Manresa (twice), of Clongowes, of Gonzaga, and of Belvedere. He was Master of Novices, Instructor of Tertians, Pastoral planning Consultant to the Irish Bishops, and also to the Major Religious Superiors (CMRS), director of the Manresa Centre of Spirituality, Socius to the Provincial, and Provincial. They never made him General, though it’s said that they thought of thrusting a bishopric on him.

You’d imagine that a man with such a gift for administration might be a nerdy type, with rows of secretaries ticking boxes for him. Joe was indeed a methodical man, who consulted wisely, prayed before making decisions, and stayed on the job till it was complete. For instance, he not merely designed the tertianship house in Manresa, but visited the site every day, made friends with the workmen, and so created a beautiful, functional building.

When, as rector of Belvedere, he had to raise funds for a school building, he showed his ability to balance the short-term and the long-term issues. As he put it to groups which he addressed: “A vision without a task is but a dream. A task without a vision is drudgery. A vision with a task is the hope for the future.” Parents were constantly reminded that education was the greatest gift they could leave to their children. With this vision before them, Joe and his collaborators worked on a 30-year plan. Part of the process entailed winning over all the constituents of the college: the Jesuit community, boys, teachers past and present, and past pupils. The target was four million pounds, and Belvedere passed it. If it has received generously, it also gives generously. Between their various projects Belvedere boys raise about a quarter of a million euro annually for charity. It is that vision of men for others, rather than lists of figures, that made these years a stimulating time for Joe Dargan rather than a begging bowl nightmare.

What people remember of Joe, however, is not so much his administrative ability as his kindness, and his readiness to give his time lavishly. He was every inch a priest, with a special gift for being with those in their last illness.  It was probably this ease in his priestly role, coupled with his passion for sport, that underlay his friendship with Alex Ferguson of Manchester United.

When he was told some very few months ago that his illness was terminal, Joe was immediately filled with consolation and gratitude for the key people in his life – those he had met and loved, in his family, in the Society, in those extraordinarily rich friendships that he so enjoyed with such beloved friends, male and female. As the doctor actually spoke to him, those people’s names and images passed before his inner eye and he was filled with joy and gratitude. Most of us would have sunk at such a moment: not Joe, because the gratitude was to God and to those who were God’s hands and eyes and ears for him in this life.

A friend remarked that Joe was the most extraordinary of ordinary men, unthreatening, affable, and open to the Lord, who achieved great things through him.

‘Tsunami’ on its way