Launch of report on prison reform 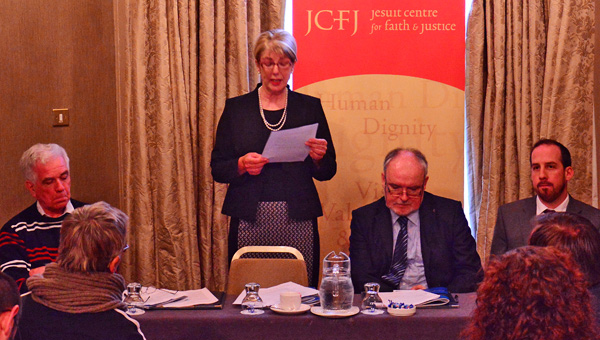 In a new report, the Jesuit Centre for Faith and Justice says that the first year of implementation of the Irish Prison Service’s “Three Year Strategic Plan 2012–2015” has shown imaginative and innovative developments in prison policy, but has also been marked by some worrying deficiencies and delays in the implementation process.

The report was prepared by the Centre with the aim of analysing progress in implementing the specific commitments made in the “One Year Implementation Plan”, published by the Irish Prison Service in mid-2012, shortly after the publication of the overall Three Year Strategic Plan.

Eoin Carroll, Advocacy Officer in the Jesuit Centre, said that the report overall revealed substantive achievements in many areas:  a reduction in overall prison numbers, a reduction in overcrowding, significant improvements in conditions in parts of Mountjoy Prison, the national roll-out of the Community Return Programme, which enables the earlier release of some prisoners under supervision, and progress in Integrated Sentence Management. Such developments have significant positive effects for people in prison, for prison staff and for society as a whole”.

Carroll said, however, that there were many concerns regarding progress in key areas:  “Promised strategies in relation to the detention of women and young people in prison have not yet been developed. There has been a failure to produce a standardised risk assessment tool for cell sharing despite the known risks and that 56 per cent of people in prison share a cell. We still do not know whether or not healthcare provision in prison meets societal standards.” He also shared concerns that rehabilitative services and family visits were in danger of being recast as privileges rather than rights.

Pauline McCabe, the former Prisoner Ombudsman for Northern Ireland, raised her serious concern that although many of the goals outlined in the Irish Prison Service’s one year implementation plan had been achieved, the government has still not released a follow up implementation plan to cover the remainder of the three year reform period, despite being well into the second year.  She noted that in her experience, “in the absence of robust implementation planning I have seen huge amounts of money, spent with good intentions, failing hopelessly to deliver the required results.” She commended the Government and the Irish Prison Service, however, on their commitment to prison reform to ensure the safe and secure custody, dignity of care and the rehabilitation of prisoners.

Speaking at the event, Fr Peter McVerry SJ, who works with the Centre, praised the Irish Prison Service, stating that he felt hopeful about the future of Irish Prisons for the first time in decades. Fr McVerry went on to say, however: “inadequate resources mean that, in some cases, the benefit of new creative policies, such as Integrated Sentence Management, the Incentivised Regimes and the Community Return Programme, is limited and may even exist more on paper than in reality. An effective Integrated Sentence Management policy, for example, would ensure that prisoners are released in a planned way. However, too many prisoners are still released at short notice, with no accommodation arranged, no money, no medical card and no supports.”

Before the Big Bang