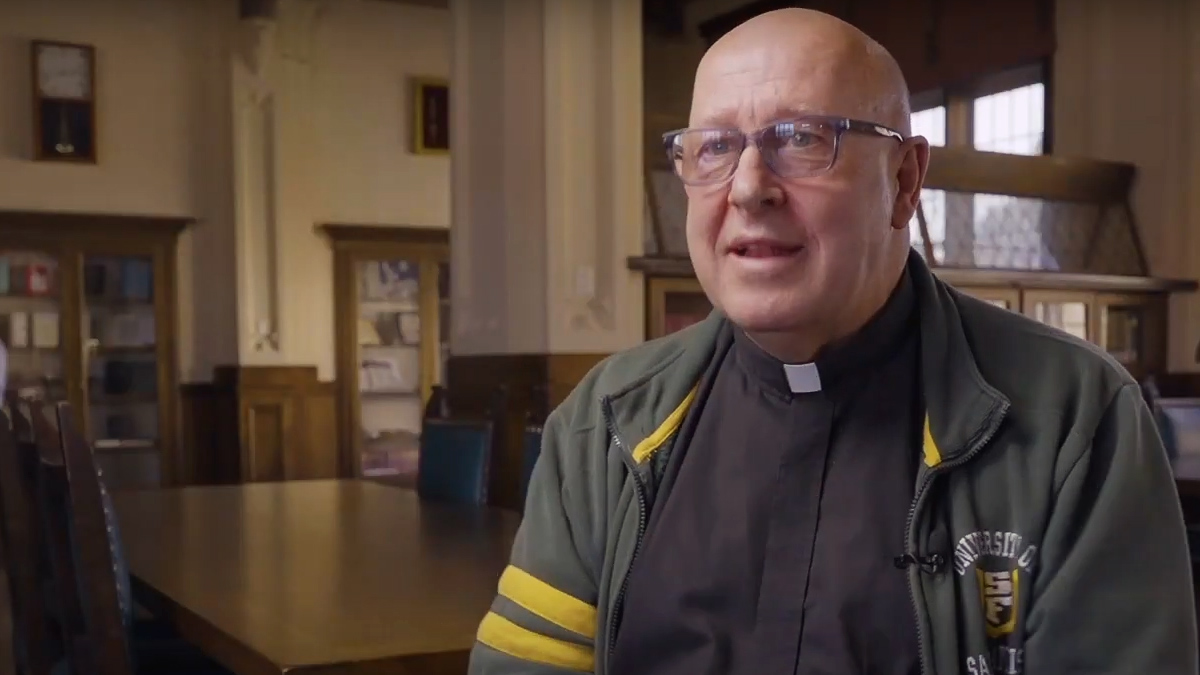 US-based Irish Jesuit Donal Godfrey SJ features in a new exhibition about members of the LGBTQ+ Irish diaspora who have made a difference. The exhibition was put together by EPIC, the award-winning Irish Emigration Museum, and it is called ‘Out in the World‘. It was launched in Ireland on Tuesday 8 June 2021 and online in the USA on Thursday 10 June, to mark Gay Pride, June 2021.

Donal Godfrey works as a chaplain at the University of San Francisco. He was one of twelve people invited to take part in the project and share his personal history. He was interviewed over a number of hours by Dr Maurice Casey, the Epic Museum historian. A clip of that interview features on the YouTube video on the exhibition website.

Organisers of the Epic LGBT+ diaspora exhibition say that across the generations, Irish LGBTQ+ people have emigrated and found opportunities to live and love openly. Yet this journey was rarely a simple transition from an oppressive island to a liberal wider world. “Irish LGBTQ+ emigrants often faced prejudice abroad. Home, once a place of shame and silence, could also become a welcoming site of return. This exhibition highlights twelve stories from the vast yet largely untold history of Ireland’s LGBTQ+ diaspora.”

‘Out in the World’ will run in the Epic Museum in Dublin and online until 1 December 2021. During ‘June for Pride’ the exhibition is free  and after that it is included in the general admission price for those visiting the Epic museum.

Donal says that he spoke out as he did for the exhibition and at Masses in order to let LGBTQ+ Catholics and Christians know they do not have to choose between their faith identity and their sexual identity.

To that end he also took part in an interview with PJ Coogan of Cork 96 FM,about both his contribution to the EPIC exhibition and his work with the LGBTQ+ community in San Francisco. The interview featured on Coogan’s current affairs programme, Opinion Line.

Gay Pride is usually marked annually in June. On Sunday 13 June Donal preached at Masses at the Catholic African-American church in St Columba, Oakland,  with an African American gay baptist minister friend. “The experience was both humbling and moving,” he said.

Donal has also been actively involved in work against racism on campus and in the Jesuit parish where he ministers. Last year his Jesuit community issued a strong and unambiguous statement on the situation in the country containing a number of commitments to action against racism. It was the result of prayer, several meetings and some online conversations that the community had during the tense summer months of protest in the wake of the killing of George Floyd.

The statement was sent to the communities of St. Agnes Parish, St. Ignatius Parish, San Quentin Catholic Chaplaincy, and the University of San Francisco. In the past year, Donal notes, the community has made progress in many of the areas they addressed and commitments they made, including the scholarship provision.

The beatitudes – more than ever!