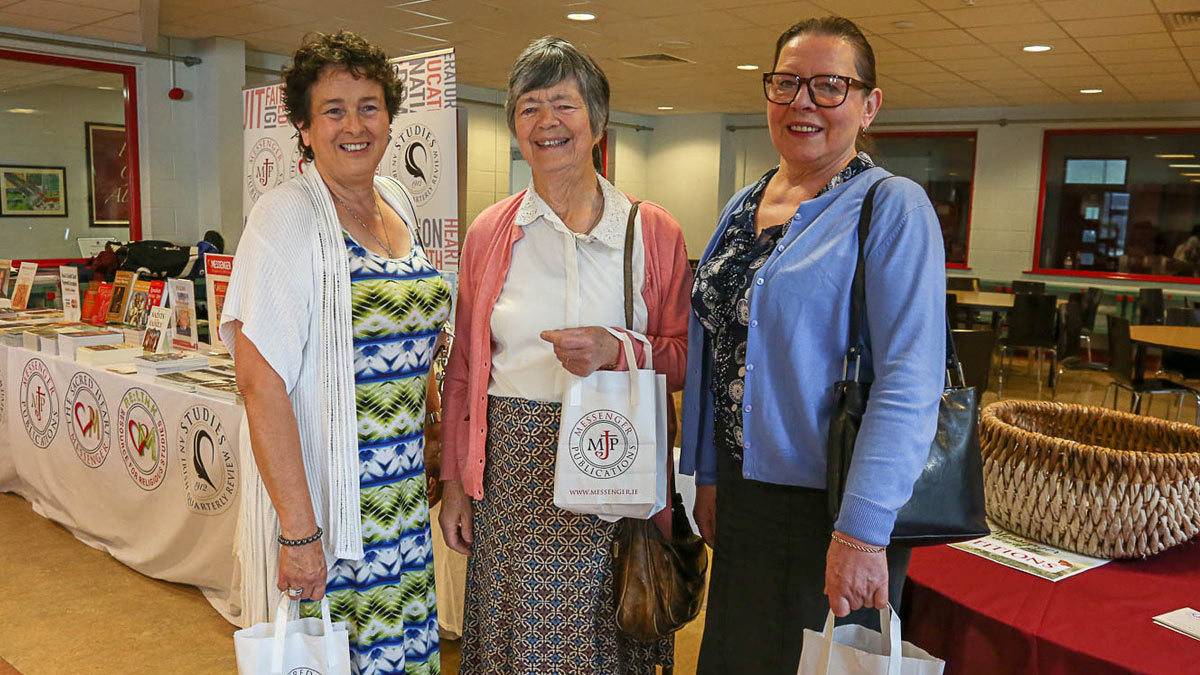 The Sacred Heart Messenger magazine celebrated their ‘Messenger Day of Joy: A Day of Prayer, Reflection and Enlightenment’ for all promoters, readers and friends on 23 June 2018 at Gonzaga College SJ, Dublin 6. It was the fourth annual event of its kind in conjunction with the ongoing celebrations of the magazine’s 130th anniversary.

Following weeks of preparation, the Messenger staff waited expectantly for their guests to arrive. They drove in ones and twos, and then small groups began to appear from the Luas into the sunshine, anxious to find their way to Gonzaga College for the special event.

“Over a hundred and thirty readers came to share this wonderful day”, said Elizabeth Foley of Messenger Publications, “and we tried to make them feel at home as they were offered tea, coffee and scones. Names were asked and friendships renewed between Messenger staff and attendees. The morning soon got going when a little bell all the way from Lourdes sounded and everyone flooded into the theatre. Donal Neary SJ, editor of the Messenger, and Leonard Moloney SJ, Irish Jesuit Provincial, got us underway with a warm welcome to all.”

For many participants the morning keynote talk by Brenda Drumm about the World Meetings of Families was a true insight into this important event taking place in August. For others it was one of the seven workshops that struck a chord with them. Fr Alan Hilliard’s talk, ‘Finding Your Way’, had people all abuzz and his afternoon session was packed. One participant who attended Siobhan Murphy’s talk on ‘A Life Story: Ignatian Spirituality’ said, “What an inspiring woman!” Whether it was the Art workshop with Eileen Kane, ‘Hello Pope Francis’ with regular contributor to the Messenger, Ronan Barry, or Gardening with new author Ciaran Burke, the participants were thrilled and engaged with each speaker.

Guided de Mello Prayer with John Callanan SJ was another popular choice. One woman commented after the morning session: “Now I know how I can deepen my time of Adoration. It is a time I treasure each week”. Over the years the Messenger staff have seen that this workshop on guided prayer is a very important part of the day and well-attended by participants.

Elizabeth Foley continued: “As I looked around the dining room at lunchtime I was happy to see people in animated conversation. Messenger staff helped people to their tables and made sure they were comfortable and had all they needed. One woman remarked that they were ‘So well looked after and what a beautiful meal.’ It was interesting to just sit and listen as they shared their experiences of the various workshops. Our bookshop displaying the full range of our publications proved very popular; many people chatted with staff about our new books and publications coming later in the year”.

In the afternoon Donal Neary SJ spoke about the future of the Messenger. He noted that the success of the Messenger‘s 130 years of continuous publication is due in no small part to the promoters and readers of the magazine. This theme was taken up again at Mass when Fr Neary presented three gold pins and five silver pins to promoters of the Messenger for fifty years and twenty-five years of service respectively. Mass was celebrated by Peter McVerry SJ to the delight of all present.

“A man summed up the day for me as he was leaving after Mass”, said Elizabeth. “‘One word describes the day for me, joy’, he said. A woman said ‘I am a reader but now after today I feel part of a family: the Messenger Family.’ I have to say that I too felt joyous as person after person spoke a few words to me as they left and the overall feeling was one of joy and happiness. I thank God that I was part of this wonderful day and I will carry each participant in my heart as I know all our staff at the Messenger will.”

From left to right in photo are Rita Moore, May Tuite and Vale Bilkeviciene.

Reading the posters of the times

The joy of wisdom

A message of joy

A cannonball moment with Ignatian prayer

Religious are essential to the Church’s mission