Moving into the new Coláiste 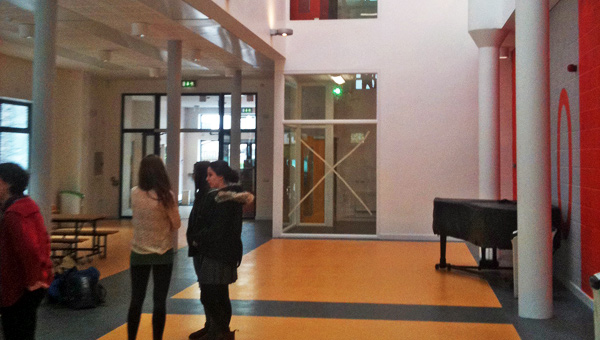 The contractors kept to their timetable: they said the new Coláiste Iognaid would be ready for use on the morning after the May bank holiday; and so it was. The new building (with no name as yet, unlike the Andrews and the Griffin Buildings) opened its doors to staff and students on Tuesday, 7th May.

The mood was rapturous. Students were goggle-eyed, thrilled skinny. It is so bright, roomy, and airy. Some stonework from the old building is incorporated nicely into the new; but the contrast with the old is sharp. The bright, broad, balconied stairwell curves its way gently up to the roof. The gymn is a cube, two stories high. This was not a formal opening, but, with regular classes, the first day of work in the new school. Now that the Griffin building is empty, work can begin on revamping it.

Congratulations to the board, especially Chairman John Humphreys SJ and Principal Mary Joyce, on having worked through major difficulties (the first contractor went bankrupt) to such a happy new beginning, and passing the half-way mark towards raising the college’s share of the bill.