Jesuits at the front 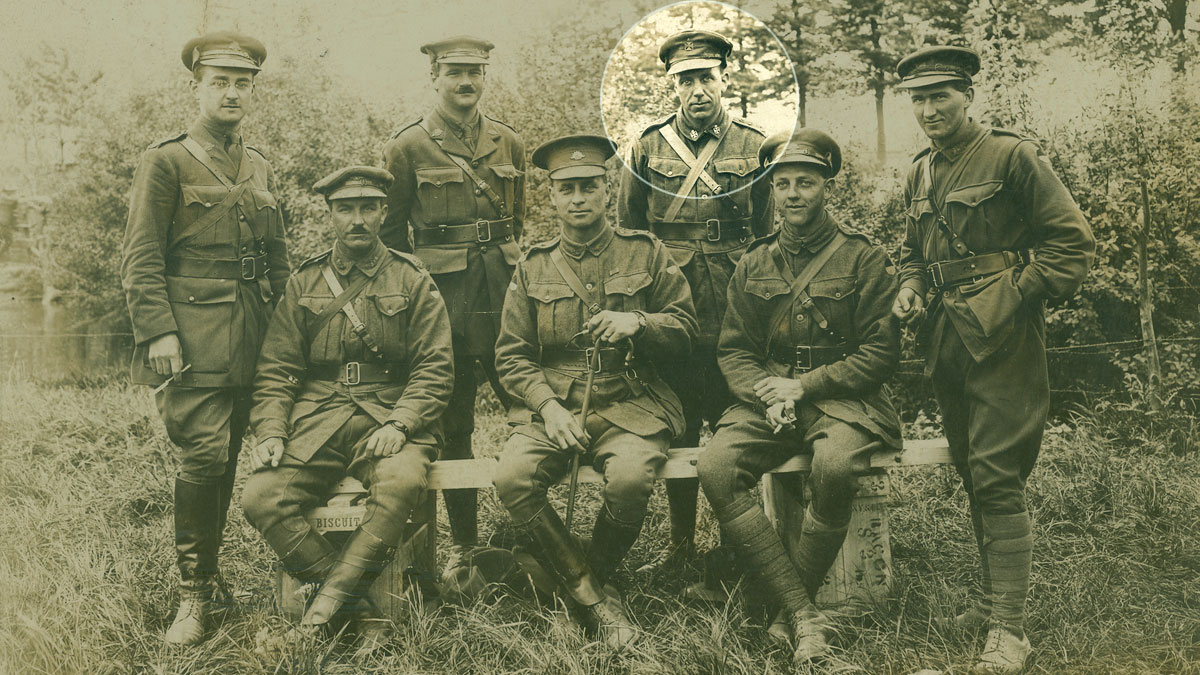 This year of commemorating Irish Jesuit chaplains in the First World War will continue with an exhibition by Irish Jesuit Archives at Roscrea Library, Tipperary, from 2nd to 31st October. It will focus mainly on Fr Michael Bergin SJ (pictured here), a Roscrea-born Jesuit who was killed at the front in 1917, and five other Jesuits who served as chaplains with the Australian army in the First World War.

The exhibition will be launched by Simon Mamouney, First Secretary and Deputy Head of Mission at the Australian Embassy, at the Library on 4 October at 6.30pm. All are welcome.

Fr Michael Bergin SJ holds the distinction of been the only member of the Australian forces in the First World War never to have set foot in Australia, and he was the only Catholic chaplain serving to have died as a result of enemy action.

Born in 1879 at Fancroft, Roscrea, Fr Bergin was educated at Mungret College, Limerick, and joined the Society of Jesus in 1897. From 1899 until the outbreak of war in 1914, he worked on the Syrian mission, which entailed his transfer to the French Lyons Province. When war broke out he was interned and then expelled by the Turks from Syria. While in Egypt in 1915, he become friendly with the Australian Imperial Forces (AIF), then training in Cairo.

In May of that year he went to Gallipoli with the Australian Forces, having enlisted as a Trooper. He carried out his pastoral duties as a priest, and worked as a stretcher-bearer and medical attendant. After his formal appointment as a chaplain in July 1915, Fr Bergin suffered influenza, chronic diarrhoea and enteric fever at Gallipoli, and was evacuated back to London to recover. Even though it was obvious that he was medically unfit to return to the front, he insisted on doing so and was back at Gallipoli in December 1915. Due to his ill health, however, he was transferred to hospital work.

In June 1916 Fr Bergin went to France with the 51st Battalion of the 13th Brigade. He lived in the front trenches, hearing confessions and celebrating Mass. He accompanied his men through such battles as Poziéres and Mouquet Farm, and was promoted from Captain to Major.

On 10 October 1917, his battalion moved up to the Front line Jesuitat Broodseinde Ridge. The next day he was with the Australian Field Ambulance when German shell-fire severely wounded him. He died the next day. There are a number of different accounts of his death but he died the following day. He is buried in Reninghelst Churchyard Extension, Belgium.

One colonel who knew the padre remarked, “Fr Bergin was loved by every man and officer in the Brigade… He was the only Saint I have met in my life.” The citation for the Military Cross awarded posthumously but based on a recommendation made prior to his death read: “Padre Bergin is always to be found among his men, helping them when in trouble, and inspiring them with his noble example and never-failing cheerfulness.”

From 2 November to 3 December, there will be another exhibition about the Irish Jesuit chaplains, specifically focusing on the connections with Rathfarnham Castle, which the Jesuits purchased in 1913 as a house of studies. Four Irish Jesuits were resident there before serving as chaplains in the First World War. These were Frs Willie Doyle, Henry Gill, Patrick O’Mara and Bernard Page. The launch date and details for this exhibition have yet to be announced.

A commemorative book, Irish Jesuit Chaplains in the First World War, which was published by Messenger Publications in 2014, is to be reprinted. It is edited by Irish Jesuit Province archivist Damien Burke.

Companions on the road to hope