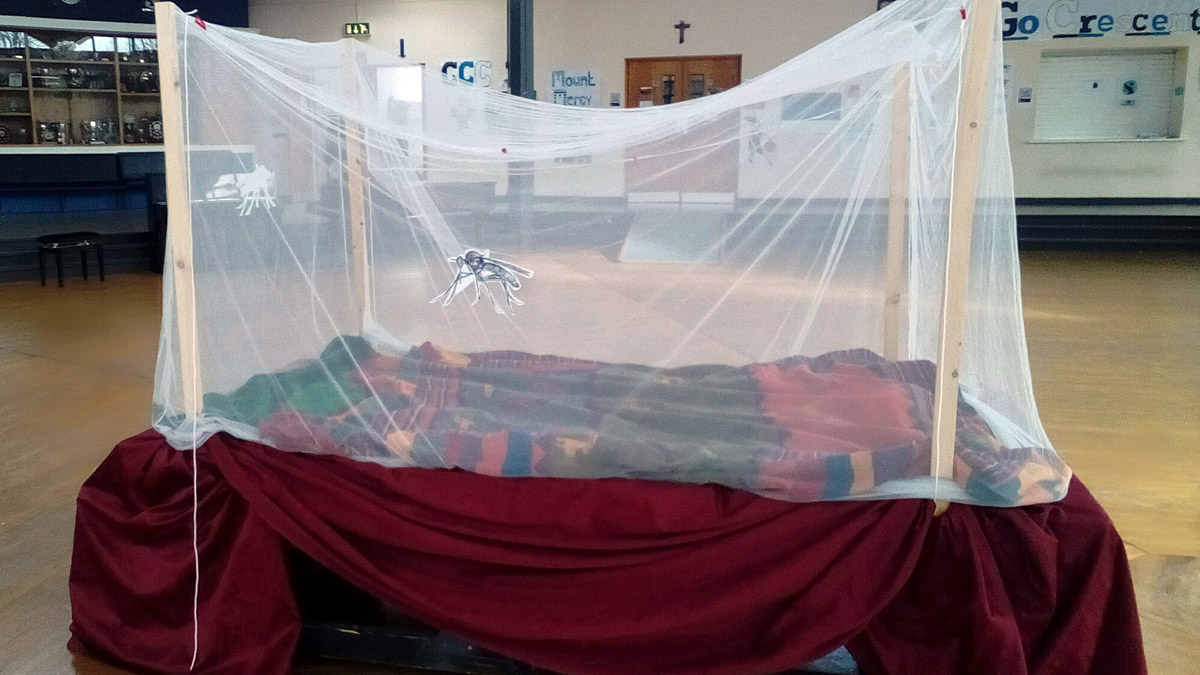 Crescent College Comprehensive SJ students and staff were part of an Ash Wednesday Mass with a difference, on 6 March 2019. During the Mass, school teacher Antoinette Ryan spoke to those present about a Jesuit province wide campaign to buy Mosquito nets for students in Ocer Campion, a Jesuit school in Northern Uganda. These nets are one of the key ways to stop the spread of malaria, a life-threatening disease transmitted by mosquito bite.

Antoinette had travelled to Uganda to do research work on the campaign in Jesuit schools there. Along with other staff and students in Crescent, she came up with the idea of a funds and awareness-raising campaign in the college. They designed and produced posters for the ‘No Mossies in March’ initiative. They also put a large mosquito net over a bed they constructed (see photo) which was on display during the Mass. The bed will remain in the Central Area of the school for the rest of the month as a reminder to everyone about the campaign.

Fr Jim Maher SJ was the celebrant at the Ash Wednesday Mass where ashes were distributed. He told the congregation that, “wearing ashes is similar to wearing the school uniform: it reminds us of who we are, what we stand for. We want to be people who are kind and caring, to welcome friendships into our lives, to be treated with respect and to give respect to others, to broaden our horizons by our learning in class, to be appreciated for who we are and to appreciate others for who they are. Sometimes we fail, and say and do things we’re not proud about.  So on Ash Wednesday we renew our commitment to what we believe in.”

The music for the Mass was provided by the school orchestra and choir, who according to teacher Diarmuid Mullins, “did themselves proud and added considerably to proceedings. Our students read reflections, reminding us that Lent encourages us to do something different.”

Diarmuid also noted that for the next 40 days all the school could make an effort “to remove things which harden our hearts. We could give up something we enjoy. We could go to Morning Prayer at the beginning of the day to say a prayer. We could gather money for our Trócaire box. We could give time, to a person, who needs to talk.” He then added: “And of course we could contribute to the school’s campaign to buy Mosquito nets for a fellow Jesuit school in Uganda”.

Helping someone out of a hole