Pebble in the oyster 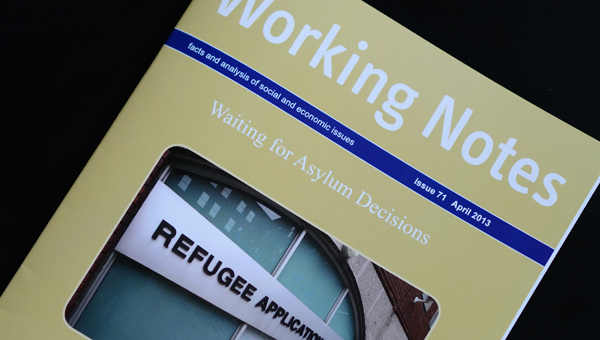 Three times a year the Jesuit Centre for Faith and Justice disturbs our peace of soul with the publication of Working Notes. Issue 71, dated April 2013, has just appeared, and “stirs it up” on several fronts by substantial, well-documented and sharply focussed articles.

Catherine Lynch breaks the silence on racism. Nicola Rooney makes us face our charitable choices with an article on ethical finance. Gerry O’Hanlon SJ questions three features of the dominant financial model: the role of the market, the growth of inequality, and the belief that economic growth is always good.

The featured article, by Eugene Quinn, director of the Jesuit Refugee Service, calls strongly for a change in the handling of asylum-seekers. When direct provision was introduced in 2000, it was envisaged that people would remain within the system on a short-term basis – no longer than six months. Now over a quarter of asylum seekers (one third of whom are children) have been waiting at least five years since they first applied for asylum in Ireland. Their lives have been put on hold; they have not committed a crime, but many endure what they feel is an indefinite sentence in direct provision. At present asylum-seekers spend on average three years and eight months in direct-provision centres of accommodation. They are not allowed to work, and they have to  endure extreme boredom and the lack of opportunity to use their skills and qualifications.

The article quotes the Supreme Court judgment in the Okunade case: “If people are not to be permitted to remain in Ireland, then the final decision in that regard should be made and acted on as quickly as possible consistent with fair process. If such persons are to stay, then they are also entitled to know that fact as quickly as possible.”

This Working Notes reflects well the mission of the Centre: social analysis and theological reflection on matters of social justice.