Peter Faber to be canonised

Next month, the Pope is to issue a papal bull decreeing the “equivalent canonization” of Peter Faber, the first companion of St. Ignatius, whom Francis considers a model figure. The process for his cause in the Congregation for the Causes of Saints is complete and now all that remains is for Francis to issue the Bull of Canonization that will proclaim the first companion of St. Ignatius a saint, extending the cult of the soon-to-be-saint to the Universal Church.

Faber was born in the Upper Savoy region of France in 1506 and died in Rome in 1547 just a few weeks before he was due to attend the Council of Trent. He was beatified in September 1872. Now Francis is extending the liturgical cult to the Universal Church. Faber’s canonization takes on a whole new meaning as the Jesuit is a model of spirituality and priestly life for the current successor of Peter. At the same time, he is an important reference point for understanding the Pope’s leadership style. Faber lived on the cusp of an era when the unity of the Church was being threatened. He mostly kept out of doctrinal disputes and steered his apostolate towards a reform of the Church, becoming a pioneer of ecumenism.

Francis spoke about Faber in his interview with Jesuit journal Civiltà Cattolica, revealing some key aspects of the priest as a figure: “”His dialogue with all, even the most remote and even with his opponents; his simple piety, a certain naïveté perhaps, his being available straightaway, his careful interior discernment, the fact that he was a man capable of great and strong decisions but also capable of being so gentle and loving. The picture of Faber that emerges from the texts is that of a thinker in action, a man who was profoundly attracted by the figure of Christ and was understanding of people.

The cause of separated siblings was one he held close to his heart and he was good at discerning spirits. He lived an exemplary priestly life and the unconditional nature of his ministry was reflected in his patience and gentleness. He gave himself without asking others for anything in return. Faber distinguished himself for his “affective magisterium”, in other words, his gift for spiritual communication with people and his ability to put himself in other people’s shoes.”

The picture is of a painting in St Francis Xavier Church, Gardiner Street; it shows Peter Faber with the other first Jesuits at the taking of vows in Montmartre in 1534. 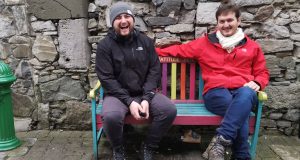