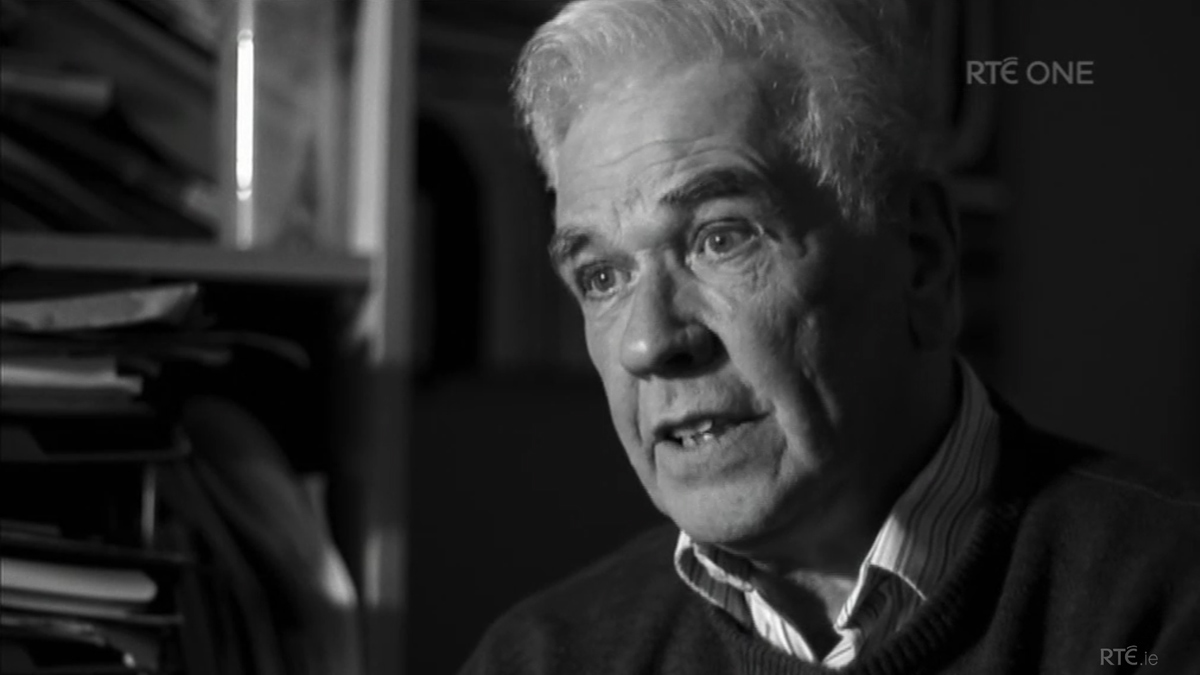 RTÉ, Ireland’s national broadcasting station, featured a 52-minute documentary last night, 6 September, on the life and work of Peter McVerry SJ. The title is ‘Peter McVerry: A view from the basement’. It can be viewed here ».

Including extensive interviews with Peter himself and with many people whom he has helped, the documentary traces his story from his boarding days in Clongowes Wood College, to his days in the Jesuit novitiate, to his college career, and thereon to his forty-year struggle against the destruction of inner city communities through poverty, homelessness and drug abuse.

By his own account he was not inclined as a young man to question the system or to rebel against it. He went from boarding school straight into the Jesuit novitiate, which he says, was like an extension of boarding school, with every day clearly mapped. Then, as was expected, he went to University College Dublin to study chemistry and mathematics. “I went with the flow; I didn’t question anything very much,” he remarks.

While he was studying philosophy and theology he decided to do a PhD in theoretical chemistry, and he spent a few years on that. At the same time he was teaching classes in Belvedere. And it was there that his life took a decisive turn. At the back of Belvedere were the Hardwicke Street flats, part of the badly deprived tenement area of north inner city Dublin. Peter was invited to visit a youth club in the flats, and the experience moved him deeply. He loved it. When a call for volunteers to live in the inner city went up in the Jesuit community he jumped at the chance.

In 1974 he moved into a tenement flat in Summerhill with two other Jesuits. The conditions in the area were appalling. There was high unemployment; there were large numbers living in one- or two-room tenements; and many of the houses were rat-infested. What particularly caught Peter’s attention was the desolation of the lives of the young people. They had little education, very little prospect of getting work, and they were locked into a tedious and hopeless world. While working with them Peter discovered that some of them, even ones as young as fourteen, were effectively homeless. He began then seriously to address this issue.

Around this time Peter acquired a name for criticising the failure of planners and politicians to meet the needs of the disadvantaged inner city communities while happily spending large sums on city infrastructure with the interests of the business community mostly in mind. The destruction of old settled communities in the inner city in the name of urban regeneration was part of this. People were wrenched away from the area in which they had lived all their lives and were dispersed throughout the social housing projects in the suburbs.

Ballymun was a case in point. It was now replete with teenagers leaving school early and being left idle and with no prospects. There was high unemployment, and high levels of crime and of drug use. Peter was granted a flat there for use as a hostel for homeless people. But the scale of the problem was huge, and public bodies were not addressing it.

“The system was chaotic,” Peter said; “there was very little available for homeless young people, except for the institutions to which people were sent by the courts. I brought one young kid who was sleeping on the streets, who was involved in prostitution to survive – he was only fourteen years of age – and we sat in the Health Board offices demanding that they do something for this kid, and all they offered him was a place in Clonmel or a place in Finglas, in one of the institutions which the courts sent you to if you were misbehaving.”

After the Childcare Act was passed in 1991, Peter had more leverage with the authorities. They were now obliged to do something. He would put pressure on the Health Board to provide suitable accommodation for children under sixteen who came to him, and if a response was slow in coming, he would take the matter straight to the High Court.

In the following years, however, things got much worse in these communities, mainly because of a heroin epidemic. Peter says he knew families in which every single child died of AIDS. The community spirit which had sustained so many people even in the darkest days of poverty began to break down. “And it broke down over drugs.”

The hostel he had established was badly impacted by drugs. “I found people in our hostels in the morning, dead from an overdose,” he remembered. Working with the homeless changed radically once drugs came into the equation. Some good came out of the situation, with communities coming together to fight the epidemic, but overall Peter is convinced that the problem is still immense. The ongoing feuds between rival drug gangs make the point only too well. According to Peter, the potential for drugs to become utterly destructive across all classes is very high. “We ignore this problem at our peril.”

Things have got worse on the housing front too. It is now a problem that is totally out of control. Whole families are ending up on the streets every week. “We are not going to solve this by the normal methods of addressing homelessness,” Peter insists. The traditional way of looking at homelessness is to suppose that the homeless people have problems – drink or drugs or mental health problems. There is no point giving them accommodation, we might think, because they won’t hold on to it. So we are content to send them off to deal with their problems, and when they have straightened themselves up the matter of homelessness can be addressed.

This doesn’t work, Peter declares. “How can you address your addcition problem if you’re living in hostels full of drugs? How can you address a mental health problem if you’re walking the streets all day with nowhere to go?” He is now keen on the ‘Housing First’ model, which has been a success in the US and Canada. The idea is to give someone the accommodation first, and then give them the supports they need in order to address their problems. This, Peter says, is much more effective.

In 2004 Peter handed over the running of his network of hostels and homeless supports to the Peter McVerry Trust. This has freed up his time, relieving him from the onerous office work that his projects generate, and so he is now able to spend most of his time in the drop-in centre, listening to the homeless people, and helping in any way he can.

Throughout the programme we are shown a Jesuit with an extraordinary passion for justice and a bottomless capacity for care, for sympathy, and for action in the cause of the thousands of people whose lives he has transformed over the past four decades.

Is environmental destruction a sin?

Public caring for the homeless

Interculturality in Jesuit Education: Bringing it into the classroom